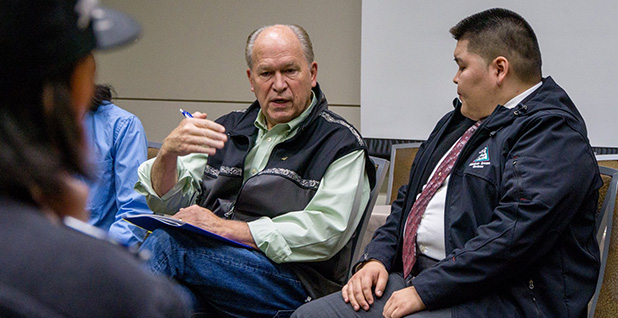 Alaska Gov. Bill Walker (I) says China is still on board with investments in the state's natural gas projects. Walker/Facebook

Alaska Gov. Bill Walker (I) and a team of staffers yesterday afternoon climbed into the back of a large SUV en route to his next Capitol Hill appointment, this one with Alaska Rep. Don Young (R).

But the most important meeting to Walker may have come on Tuesday, when he met with officials of China Petrochemical Corp., known as Sinopec.

That venture would include construction of a gas processing plant on the North Slope, an 800-mile pipeline, and a liquefaction and export facility in southern Alaska.

Under the pact, Bank of China Ltd. and CIC Capital Corp. would provide 75 percent of the funding — roughly $32 billion — to build the Alaska LNG project. The state would repay that loan by providing China with 75 percent of the LNG capacity of the Alaska pipeline for the length of the agreement.

The agreement gives Alaska and the Chinese companies until the end of the year to reach a final pact on the project.

But during Walker’s meeting with Sinopec officials, the two sides agreed to fast-forward their work on a final agreement.

To speed up the timeline, the two sides plan to hold a more condensed schedule of meetings. "We’re talking about negotiations [that] would take place either in Washington, D.C.; in Alaska; or in China," the governor explained. "And we’re opting for Alaska."

Walker’s meeting with the Sinopec officials comes at a time when President Trump has vowed to impose $50 billion in import tariffs on Chinese goods. Chinese officials have responded by announcing an imposition of new duties on U.S. goods.

But thus far, the Alaska project has escaped such delays. Walker said his talks with Sinopec were "very, very positive. They did not bring up the trade issue, nor did I."

Why is the Alaska project moving forward when the West Virginia investment has slowed?

"I think it’s the proximity. We’re very close" to China, the governor said.

In addition, Alaska’s natural gas "is a product that they would very much like," he observed. "And they see the opportunity of having a long-term supply at a stable price with a stable government.

"I think this transcends the current discussion on trade issues," Walker said.

"We’ve had some very significant meetings," he said. "And that’s one of the beauties of this conference. It brings together a lot of people, and you don’t have to fly all over the world to meet."

BP and Exxon Mobil, together with ConocoPhillips, were involved in the original partnership with the state to build the Alaska LNG project. But in late 2016, the companies decided not to move forward with the expensive venture due to low natural gas prices and an oversupply of LNG on the world market.

Since then, the export plan has been managed by the Alaska Gasline Development Corp. (AGDC), a state-owned company.

More recently, BP Alaska agreed to sell the gas reserves from the company’s Prudhoe Bay and Point Thomson sites to AGDC. The parties are not disclosing how much the state would pay for the gas (Energywire, May 8).