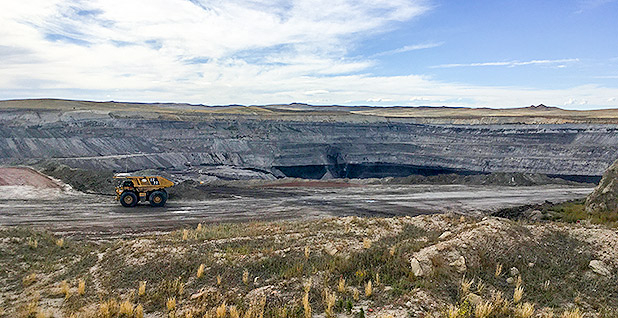 Powder River Basin coal is pictured. The basin has been a main source of fuel for power plants in Illinois. Pamela King/E&E News

For years, coal trains from Wyoming’s Powder River Basin have snaked through Illinois delivering millions of tons of fuel to power plants that, in the case of Vistra Energy Corp.’s Coffeen power plant, are just a few miles from the nearest mine.

That fact — that local power plants are buying 50 million tons a year of Western coal — irks the Prairie State’s mining industry, which has tried unsuccessfully to find a solution.

But the fact remains that while Illinois is a top four producer and consumer of coal, 85 percent of what’s dug from the earth locally is loaded onto trains and barges and sent out of state or shipped overseas.

The long-standing paradox is mostly a product of the 1990 Clean Air Act amendments signed into law by the late President George H.W. Bush.

Now, could technology from a Chinese company — one with ties to one of the former president’s sons — finally help marry the state’s power and mining sectors?

Despite unanswered questions and a tepid response by the state’s largest coal reserve owner and its largest operator of coal-fired power plants, Phil Gonet, executive director of the Illinois Coal Association, is optimistic.

"I think this is the best chance we’ve ever had since Illinois deregulated the electric industry," he said.

Others see the solution as a desperate Hail Mary attempt, because the economics of burning coal for electricity continue to erode under pressure from abundant shale gas, stagnant demand and increasingly cheap renewable energy.

Politically, coal won’t be getting help in Illinois, where incoming Gov. J.B. Pritzker, a Democrat, has pledged climate action, including more renewable energy. And the Illinois Legislature will become an even deeper shade of blue next month.

If Illinois’ coal-fired power plants are going to improve their financial performance at a time when the state is trying to squeeze greenhouse gases from its power mix, including subsidizing Exelon Corp.’s nuclear plants, they’ll likely have to do it on their own.

That reality was the backdrop for a task force created by 2017 legislation passed at the urging of the coal industry. And that was essentially the conclusion of the task force’s final report, approved on Monday.

Members of the Flue Gas Desulfurization Task Force, which didn’t meet until a year after it was authorized, include Gonet, the heads of Illinois’ EPA and Department of Natural Resources, and more than a half-dozen legislators, most of them from coal-producing districts in the southern part of the state.

The group’s mission was to study ways to increase use of Illinois coal at local generating units.

Power plant owners will take a lot to be swayed. While Illinois has the nation’s largest bituminous coal reserves (38 billion tons), the coal is high in sulfur, which means increased sulfur dioxide emissions, a contributor to fine particle pollution and regional haze.

Limits on SO2 from the Clean Air Act amendments and the state’s even-stricter multipollutant standards led most Illinois generating units to invest in pollution controls or switch to lower-sulfur PRB coal.

Most coal plant operators chose the latter, less-costly solution. And when Illinois deregulated its retail electric market in 1997, it cemented their decision.

Past efforts to encourage power plants to install scrubbers so they could use locally mined coal have failed, including 1991 legislation that ordered utility regulators to approve the construction of four scrubbers at unspecified power plants. Ultimately, Western states challenged the law in court and won on the grounds that it interfered with the free flow of interstate trade.

Fast-forward to today. The coal industry’s latest, and perhaps last, hope to find a market in the state’s power sector rests with Jiangnan Environmental Technology Inc. (JET), a Nanjing, China-based company with its eyes set on the United States.

Other members of JET’s U.S. team include David Phillips, a former KeySpan Corp. CEO and chairman of the Bilateral U.S.-Arab Chamber of Commerce, and Richard Westerdale II, a former State Department adviser.

While at the State Department, Westerdale spoke at a JET technology symposium at the St. Regis hotel in Washington, providing an overview of the Trump administration’s energy policy. Less than a month later, he would leave the government to take a job with the company.

Other presenters at the conference included JET’s founder and chairman and the chief operating officer of its U.S. subsidiary, a former Indianapolis Power & Light Co. executive.

JET’s SO2-removal system is an ammonia-based scrubber that differs from lime- and limestone-based scrubbers at many U.S. power plants.

The company said its technology has numerous advantages, including that there’s no solid waste or wastewater byproduct to manage. In fact, the byproduct is ammonia sulfate, a fertilizer that can be sold and applied to farm fields.

Company presentations at the technical symposium and discussions with Illinois task force members suggest that not only do the systems cost less to operate than traditional scrubbers, but they will produce revenue for plant owners.

"The obstacle is the cost of the scrubber. In a deregulated market, how are you going to pay for the scrubber?" Gonet said. "The critical part of the [JET] proposal is they’ll build the scrubber and they’ll operate it."

If JET’s technology sounds almost too good to be true for the U.S. coal plant operators, maybe it is.

While JET said the technology is installed on 150 plants in China and Poland, no U.S. operator has signed on, at least not yet.

Officials at the company didn’t immediately respond to an interview request.

But power industry representatives who have studied the technology have raised questions about permitting; the sharing of risk between power plant operators and JET related to emissions and system performance; and how the technology would affect emissions of other pollutants, such as mercury. The technology also would require changes at plants to handle large volumes of liquid ammonia at power plant sites and dealing with the handling and storage of the ammonium sulfate byproduct.

But at least a couple of power companies have studied JET’s technology, including an Indiana utility, which sent a third-party engineering firm to China to evaluate the scrubber system.

Dynegy Inc. also sent a team to China in mid-2017 to evaluate whether JET’s technology made sense for the company’s Zimmer power station in Ohio, according to the former managing director of the plant, who presented at the fall technology symposium.

And JET did its own case study using the Kincaid coal-fired power plant in Illinois, concluding that the plant could save $44 million annually with its SO2-removal technology and a switch to Illinois coal.

Dynegy, which was acquired by Texas-based Vistra earlier this year, is also the largest coal plant operator in Illinois, with nine plants, including Kincaid.

A company spokeswoman didn’t respond to an interview request, but Vistra did provide a three-page letter to the Illinois task force acknowledging that its representatives had met with JET representatives for a presentation on the company’s technology and business model.

The Vistra team will "review the details of JET’s proposal and make an independent assessment about the feasibility of their proposed options, technologies, and economics," the letter said.

Vistra said it couldn’t confirm the cost savings from the Kincaid plant case study and said little else about it except that the plant is in compliance with environmental regulations.

In the meantime, coal plant operators including Vistra face mounting pressure related to disposal of coal ash and the impact on groundwater (E&E News PM, Nov. 28). And the company is awaiting action by the Illinois Pollution Control Board on a request to loosen fleetwide emissions standards to give the company more flexibility to operate its more profitable, "unscrubbed" units (Energywire, Nov. 5).

Meanwhile, environmental advocates have remained focused on those issues and implementing the 2016 Future Energy Jobs Act, which is expected to bring 4,300 megawatts of new wind and solar development and increased investment in energy efficiency.

"What the workers and communities who depend on these plants [want] are not wishful thinking by task forces, but real resources and help in planning for the clean energy grid of the future," Jack Darin, executive director of the Sierra Club’s Illinois chapter and a member of Pritzker’s energy transition team, said in an email. "Illinois should focus on ensuring these sites are remediated, that workers’ health care and retirement plans are secured, and establish new programs and resources to attract clean economic development to these communities."

Vistra executives have made clear that getting regulatory relief in Illinois to boost its fleet’s profitability is a priority for the company.

But power plant operator and coal producer Peabody Energy Corp., which provided comments to the task force, also challenged whether it made economic sense for Illinois power plants to use local coal even if the SO2 emissions weren’t a concern.

Both companies said PRB coal, once referred to by an Illinois legislator as "garbage coal," is cheaper than coal that’s locally sourced, even accounting for the lower energy content and the cost of hauling it 900 miles by rail.

St. Louis-based Peabody, the largest holder of coal reserves in the Illinois Basin, a coal-producing region that spans southern Illinois and parts of Indiana and Kentucky, said even power plants that have scrubbers installed continue to burn PRB coal for the cost advantage.

Even though Peabody didn’t dispute that the high sulfur content of Illinois coal is the main barrier to increased use in local power plants, the company said the task force report "should be cautious not to mislead the reader into believing that if this barrier is removed it will create a boon for the Illinois coal industry."

In the end, the task force made no suggestions to the Legislature for policy changes to incentivize the use of Illinois coal and merely recommended urging Vistra and NRG Energy Inc., the owner of a plant near Chicago, to consider the technology.

But Gonet of the Illinois Coal Association said the fact that there’s no request of the General Assembly or policy changes recommended is significant.

"I think that’s the good news part of this," he said. "It’s a private-sector solution."