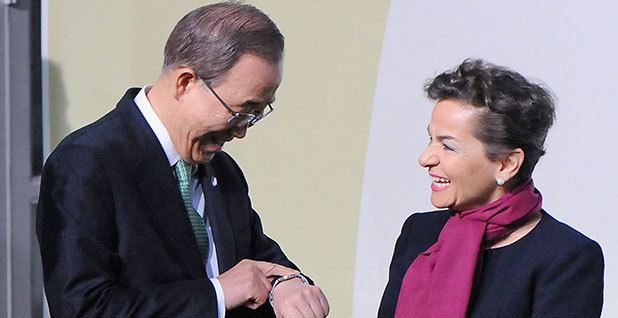 Former U.N. climate chief Christiana Figueres today formally steps into the race to become the next secretary-general of the United Nations.

Figueres’ candidacy, first reported by E&E and announced two days after she stepped down from leadership of the U.N. Framework Convention on Climate Change (UNFCCC), makes her the 12th contender to replace Secretary-General Ban Ki-moon when he departs at the end of the year (Greenwire, June 24). Costa Rican President Luis Guillermo Solís will file a letter nominating Figueres today, her office confirmed.

Analysts said they expect Figueres will try to parlay her success shepherding a global climate change agreement in Paris last year into support for her bid for the U.N. top job, but they noted that she will have a number of hurdles to overcome along the way.

"She, over a period of six years, was able to get an issue that can be very difficult and controversial to a point where it was uniformly accepted by member states with very diverse economic and political interests," said Greg Dotson of the Center for American Progress. "That’s quite an accomplishment."

"Not only is she personally known, but she is a key person associated with a historical success in international negotiation," he added.

Figueres is a seasoned diplomat who can claim substantial credit for what is broadly considered one of the United Nations’ chief successes in recent years: the negotiation of a global agreement by 195 countries to each deliver commitments on curbing emissions and boosting clean energy, with a legally binding process aimed at increasing ambition over time.

U.N. chiefs have traditionally been selected by a narrow group of countries in private discussion — the United States, the United Kingdom, France, China and Russia, which together are the five permanent members of the Security Council. Would-be leaders have mostly been vetted on issues of peace and security, with those countries’ political interests also informing which candidate is ultimately recommended to the General Assembly.

But this year, the General Assembly — which includes all members of the United Nations — will have a somewhat broader role in the selection of a new secretary-general.

Candidates must be nominated publicly and provide a "vision statement" for how they propose to lead the United Nations. And they must face questions by countries other than the permanent five, including at a "global town hall meeting" on July 12 that will be broadcast live on Al Jazeera.

This broader platform might buoy candidates like Figueres who have resumes that transcend the usual fields of security and stability that most U.N. leader selections have been based upon.

Not everyone, however, is bullish on the prospect of a candidate who would make climate change a priority.

"She certainly is a capable bureaucrat, but in today’s global security environment, I doubt focusing on climate issues is a good idea," Frank Maisano, an energy industry consultant with the firm Bracewell LLP, said of Figueres.

"It is clearly a bottom-tier issue when compared to the terrorist attacks taking place around the world," he said.

There have already been question-and-answer sessions with the other 11 candidates, though observers say Figueres is not at a disadvantage because she is joining the roster relatively late. The first "straw poll" by the permanent members is July 21, and more candidates might throw their hats in the ring between now and then.

Orr notes that the early days of the campaign have focused heavily on peace and security, with little attention paid to other global challenges — including climate change. Figueres’ candidacy will force other candidates to state their views on what has become a key issue facing the international community and its leaders, he said.

"Even if it’s not in the formal job description, the role of the secretary-general is providing good offices to member states on tough issues," Orr said. "Climate change has been No. 1 on that list for this SG."

Ban surprised some observers by making climate change — together with women’s issues — a focus of his own tenure. He used his convening power and sway with world leaders to help corral countries into putting forward significant pledges ahead of Paris, convincing them that the process still had potential after it all but collapsed in Copenhagen, Denmark, in 2009.

He is also expected to use his final days in office to help the deal take effect. It will do so when 55 countries responsible for at least 55 percent of the world’s greenhouse gas emissions join — a tally that is now within close reach. Urging countries to join is likely to be a focus of this September’s General Assembly meeting in New York.

"His willingness to use every tool in the toolbox, both publicly and privately, to help member states move forward on this issue I think was hugely important to the ultimate success of Paris," said Reid Detchon, vice president of energy and climate strategy at the U.N. Foundation. "That’s a role on this issue that we’ve never seen before in a secretary-general."

Even if the Paris Agreement enters into force before Ban leaves office, the work of setting the agreement in motion is only beginning. In 2018, countries must revisit their Paris pledges and consider offering more ambitious ones for the future.

A climate-focused U.N. leader could use his or her bully pulpit to help achieve that, observers said.

Saleemul Huq, a senior fellow at the U.K.-based International Institute for Environment and Development, praised Ban for his personal engagement on climate change but said Figueres would bring a new passion and charisma to the job.

"I think increasingly the secretary-general speaks for the whole world, and they have to take that mandate seriously," he said. While Ban was an unremarkable speaker, Figueres "can raise a crowd to tears with her oratory," he said.

Momentum behind electing a woman

Huq added that Figueres had demonstrated genuine concern about the experience of poor populations on the front lines of climate change. He remembers that she visited Kathmandu, Nepal, for a conference on community-based adaptation in 2014.

A leader like Figueres might go some way toward counteracting the United Nations’ uneven balance of power, which is strongly skewed toward powerful countries like the five permanent Security Council members, he said.

But those five countries still effectively pick the secretary-general, even if their choice is open to more scrutiny this time around. The final selection is expected to occur in October. It is unclear whose name will rise to the top or what criteria the selection will be based on, though Dotson noted that most of the governments that were protagonists during Paris will still be in place when a new leader is selected. The exception is the United Kingdom, which will likely have a new prime minister by then.

"She is at a unique point in history," Dotson said of Figueres. "Not only did she facilitate along with France and the United States a historic success of international diplomacy, she’s also becoming a candidate for the U.N. secretary at the exact moment that that historic success is being understood by everyone, it’s being adopted by everyone, and the people she worked with to accomplish it are still in office."

Figueres might be further helped by a growing campaign to elect the first female director-general this year. But it is unclear whether her status as a diplomat from a developing country in Latin America will help or hurt her. It is U.N. practice that leadership positions follow a regional rotation, and it is Eastern Europe’s turn. Seven of Figueres’ rivals are from Eastern Europe, but observers describe the rotation as a guideline, not a rule.

Helen Clark, a former New Zealand prime minister and administrator of the U.N. Development Programme, is another secretary-general contender who has been praised by some for her environmental credentials. In Clark’s vision statement posted on the U.N. website, she said that preventing global environmental degradation would be one of her priorities as U.N. chief.

"Even with the Paris Agreement and a lift in ambition on climate action, we face an increase in extreme weather events for decades to come and the prevalence of food and water insecurity," she wrote. "This will take time to mitigate and support for adaptation and building resilience for the most vulnerable peoples and countries is urgently required."