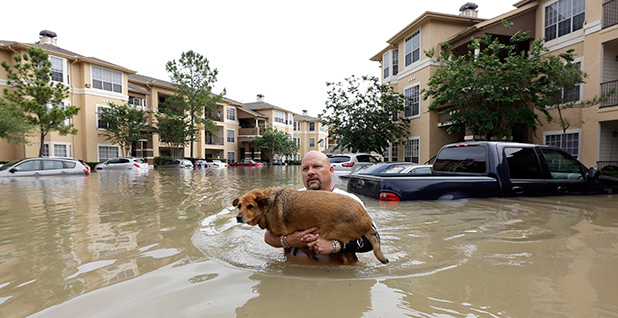 Louis Marquez carries his dog, Chocolate, through floodwaters after his apartment flooded Tuesday in Houston. This week's storms dumped more than a foot of rain in and around Houston, flooding large areas and cutting off power to thousands working in the "energy capital of the world." Photo by David J. Phillip, courtesy of AP Images.

HOUSTON — This "energy capital of the world" for years has been staring the threat of a man-made disaster in the face, and city leaders are only now beginning to take that threat seriously, or so they say.

A storm that submerged Houston late Sunday and Monday has virtually shut down the nation’s fourth-largest city. Flood warnings are still being issued, and there are signs that two major urban flood control projects are under increasing stress.

Communities neighboring the Barker and Addicks reservoirs’ dams have been warned about more flooding. Multiple school districts have been closed for days. At least eight deaths have been reported.

The rain was heavy — up to 16 inches in a 24-hour period in some areas — but the storm was not epic, and not in any way unusual. That one storm could wreak so much havoc and cause so much trouble is a serious problem in a city that is a central hub of this nation’s energy economy and infrastructure.

"We certainly can’t control the weather," Mayor Sylvester Turner said in a press conference at the outset of the emergency.

But the city can certainly plan for it, and it’s not doing that, critics shot back.

Houston frequently experiences hurricanes, and weather forecasters worry that this city is overdue for another big one. This week’s flood calamity suggests the next hurricane could cause a major disaster, challenging inland transport as much as potentially damaging refineries and other coastal energy infrastructure, and likely forcing a mobilization of state and federal disaster relief resources on a scale similar to the aftermath of Hurricane Katrina in 2005.

What that would mean for U.S energy supplies is anyone’s guess. But even the more routine flooding has an impact on energy companies and threatens to make the city less appealing to the oil and gas workforce that is a chunk of the local economy.

Exxon Mobil Corp. has just opened a new campus in a part of the city hit hard by the floods.

Critics of the city government’s lax attitude about repeated flooding events are pointing out that enticing newcomers to Houston, including oil and gas executives and workers, will get more difficult if people fear that their homes will be inundated or they can’t get to work because of flooded highways.

"The energy companies employ a lot of people, and those people live in the neighborhoods that get flooded," said Ed Browne, chairman of the local group Residents Against Flooding. "This definitely affects the oil industry, and how they perceive Houston."

A year ago, this city and much of Texas were inundated after a month of rain culminated in a major Memorial Day weekend storm (Greenwire, May 27, 2015).

The May 2015 flood put pressure on two Army Corps of Engineers flood control projects. The failure of either of the two dams used to slow water rushing to the Gulf of Mexico would put downtown Houston underwater. Many oil and gas companies call the central business district home, as do the banks, accounting firms and consultancies that work for the industry.

Army Corps representative Sandra Arnold said neither dam is at immediate risk of a severe problem, but the most recent storm has forced construction to stop on a project designed to shore up the dams for another 70 years. The Army Corps classifies both dams as "extremely high risk," in light of the size of the population they protect.

Work started on the dam project in late February. "Right now, construction has stopped until further notice," she said.

The Harris County Flood Control District (HCFCD) said last year that it was confident its flood infrastructure projects were pulling ahead of the racing development going on in Houston’s western and northern fringes, the areas hardest hit by the most recent flooding. The district builds parks as open space for water detention, and it buys out properties in flood zones.

Browne, the head of Residents Against Flooding, called "bullshit" on the notion that Harris County is getting ahead of the flooding crisis. The problem, he said, is the city’s cozy relationship with developers more interested in doing business with the city than in hearing the concerns of flooded communities.

Some cities require runoff mitigation for every inch of paved land. Browne said Houston requires 50 percent mitigation. Still, even that rule is often flouted or unenforced, he said, or the government waives the requirement.

Despite the crash of oil prices, development to the west and north of downtown Houston has continued at a mad pace. Parks and open spaces built to absorb water haven’t been enough to stop major flooding in areas where pavement is still king. New storefronts and housing developments have noticeably made things worse. For example, areas along Barker Cypress Road were flood-free during the May 2015 disaster. This time, the road flooded in at least three points where new developments were added since May, partially closing access to two major freeways.

"Extreme rainfall in northwestern Harris County has led to significant rises in the Addicks and Barker reservoirs, which were constructed in the 1940’s to store water that would otherwise flood downtown Houston," the Harris County Flood Control District explained in a public notice. "As water levels rise in the reservoirs, roadways that run through them have gone underwater, and neighborhoods immediately adjacent to the reservoirs’ western and northern boundaries could see rising water in streets and possibly homes."

A suit for remedy

Meanwhile, efforts to address the risk faced by the city’s coastal energy infrastructure are moving forward, but at a snail’s pace.

Speaking for Freeport LNG, a liquefied natural gas export terminal being built south of the city, Charlie Rexford said that facility has not been affected by the flooding that has shut down parts of Houston. As for the company’s hurricane plans, Rexford directed EnergyWire to a website stating that the facility complies with Port Freeport rules and that it is well-prepared for another storm.

"The Freeport LNG Quintana Terminal is designed to withstand a 100-year storm," the company says. "In addition, a storm protection levee (SPL) has been constructed across the entire south side of the site as an extension to the existing Velasco Drainage District SPL. This levee provides protection to site facilities from wave action associated with a hurricane storm surge."

Refineries threatened by storms in the Gulf of Mexico are usually required to do their own disaster planning. But regional officials here are looking at how they can guard the Houston Ship Channel and the petrochemical complexes that line it from a devastating storm surge. But those talks are progressing slowly, Arnold at the Army Corps of Engineers acknowledged.

More active discussion and public scoping sessions will start this summer. But research on the ins and outs of building a massive dike with floodgates could take up to seven years.

Browne said his group has had enough. The city is addicted to a fast pace of development, he said, and officials seem uninterested in putting tough flood control regulations in place. Residents Against Flooding is pulling together a lawsuit challenging the city’s approach to flood control, he said, pressing for better drainage, more water detention infrastructure, stricter ordinances for developers and better enforcement of existing rules.

"It’s a suit for remedy. We’re not filing it for money; we’re filing it to fix the problem," Browne said.

"At some point, the energy companies are going to say, ‘Well, maybe Houston’s not a good place for us in terms of quality of life,’" Brown argued. "If Houston can’t do the big job of keeping their employees safe, then I think a lot of the energy companies may think twice about bringing more people here."

Browne fears the mayor will appoint pro-development people to the posts.