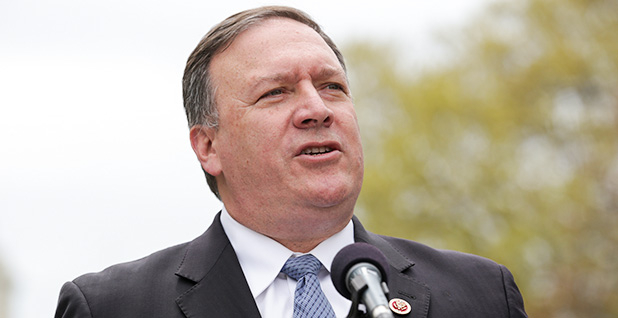 Rep. Mike Pompeo, the Kansas Republican nominated by President-elect Donald Trump to head the CIA, doubts the science behind climate change and is one of the largest benefactors of the pro-fossil-fuel Koch brothers on Capitol Hill.

From his seat on the House Energy and Commerce Committee, Pompeo has been a steadfast backer of efforts to expand domestic drilling, opposed environmental regulation and renewables, and has questioned federal efforts to address global warming.

His views are in sync with the Kochs, whose massive energy corporation is headquartered in Pompeo’s Wichita-based district. The Kochs have been among the nation’s top donors to Republicans in recent years via a sprawling network of affiliates that aim to promote domestic fossil fuels, less government regulation and lower taxes.

Pompeo has defended those efforts, which have often drawn the ire of Democrats who say GOP energy policies are strongly influenced by the Kochs.

"The Democrats’ obsession with the Kochs as a political target is, indeed, additional evidence of a truly Nixonian approach to politics. That the Obama administration and its allies use private citizens as symbols to be attacked and vilified is unfair and deeply threatening to our civic life and the rule of law," Pompeo wrote in a 2012 opinion piece for Politico titled "Stop harassing the Kochs."

While some liberal groups have raised concerns about Pompeo’s nomination given his ties to the Kochs, the brothers and their affiliates did not endorse Trump or donate to him during the campaign. They did funnel millions to down-ballot federal races that helped with Republican turnout on Election Day.

A Koch spokesman was enthusiastic about Pompeo’s nomination.

"Congressman Pompeo has served Wichita and Kansas well for a number of years on Capitol Hill," said Philip Ellender, president of government and public affairs for Koch Companies Public Sector. "We wish him nothing but the best in his new role serving the country."

Pompeo himself initially backed Sen. Marco Rubio (R-Fla.) for president before switching to Trump in the spring after his first choice dropped out.

While it’s hardly unusual for a lawmaker to look out for the interests of local corporations, Pompeo’s ties to the Kochs run deep. They have not only been generous campaign donors but also shared an overlapping business interest with him before he won his House seat in 2010.

"They used to call [the late Washington Sen.] Scoop Jackson the senator from Boeing; Pompeo is the representative from the Koch brothers," said John Pike, director of GlobalSecurity.org, a think tank that analyzes national security threats and military spending.

Pompeo has received $357,300 from groups affiliated with the Kochs since he won his seat in 2010, including $64,300 in 2016 when he did not face a competitive challenge, according to the Center for Responsive Politics. He was the top congressional recipient of cash from the Kochs this cycle, more than doubling the campaign dollars given to the next largest House recipient — Speaker Paul Ryan (R-Wis.).

Moreover, the Kochs helped Pompeo launch his congressional career with $80,000 in donations in 2010 when he won a competitive Republican primary to claim an open House seat. The Kochs also backed him in 2014, when he faced a primary challenge from former Rep. Todd Tiahrt, who gave up the seat in 2010 in a failed Senate bid.

Pompeo, 52, had an impressive resume before he ran for Congress. He graduated first in his class from the U.S. Military Academy at West Point and, after serving several years as an Army officer, got his law degree from Harvard University, where, like President Obama, he edited the prestigious Harvard Law Review.

After a stint at the powerhouse Washington law firm Williams & Connolly, Pompeo joined with other West Point alumni in 1998 to launch Thayer Aerospace, a machining company based in Wichita. Among the backers for the venture was Koch Venture Capital, which contributed less than 2 percent of the company’s overall investment, according to a 2011 story by The Washington Post.

Pompeo sold his interest in the company in 2006; it’s not clear how much he made on the sale. However, federal financial disclosures suggest it may not have been too much as they place his net worth at just over $500,000 — in the bottom half of congressional wealth.

Pompeo then became a top executive with Sentry International, an oil equipment sales company based in Wichita. He also around that time was a trustee for the Flint Hills Center for Public Policy, now known as the Kansas Policy Institute, a nonprofit group funded in part by the Kochs that promotes free-market ideas.

In Congress, Pompeo was an early proponent of ending federal energy tax breaks, for both renewables and traditional sources.

As a freshman, Pompeo in 2011 introduced legislation that would end tax breaks for wind, solar, electric vehicles, biofuels, nuclear and fossil fuels. Pompeo was also a prominent critic of a bipartisan push in 2011 to enact about $5 billion to promote natural-gas-powered vehicles and associated infrastructure.

The "Pickens Plan" — named after its chief proponent, the oil and hedge fund investor T. Boone Pickens — was picking up steam on both sides of the Capitol until it faltered from the concerted opposition of Heritage Action for America and other conservative critics, both on and off the Hill.

"Having dozens of energy handouts leads companies to spend resources lobbying Washington rather than tinkering in their garages and labs. Indeed, we are counting on one of these alternatives to succeed. We just know that we have no idea, nor do any of our peers in Congress, which one consumers ultimately will demand. The winner must be determined the old-fashioned way: through hard work, innovation, American moxie and superior skills engaged in competition," Pompeo wrote in The Washington Times with his co-sponsor, Rep. Raúl Labrador (R-Idaho).

Pompeo has a 4 percent lifetime score on the League of Conservation Voters’ congressional scorecard. His 2015 LCV score was zero.

Pompeo has been especially critical of the Obama administration’s handling of climate change, repeatedly making an argument popular on the right that the White House was making it a higher national security priority than fighting Islamic terrorist groups. He has backed legislation to bar U.S. EPA from regulating greenhouse gases and has opposed the Paris climate accord.

"Kansans and Americans shouldn’t be forced to shoulder the costly burden of President Obama’s careless attempt to secure his legacy," he said in a statement about the Paris deal last December. "Congress must also do all in our power to fight against this damaging climate change proposal and pursue policies that support American energy, create new jobs, and power our economy."

As CIA director, Pompeo would not have a direct hand in shaping climate change or energy policy.

Most intelligence analysts, including Pike, say the CIA still uses global warming when assessing national security around the globe, especially given the impact weather changes can have on agriculture and other economic interests. It’s not clear whether Pompeo would scale back analyses associated with climate change at the CIA.

Following their work at the agency, former CIA chiefs have often weighed in on energy policy and have even worked in the energy fields, a sign of its importance in national security and intelligence matters.

James Woolsey, who served as CIA director for two years under President Clinton and was a national security adviser to the Trump campaign, was among the signatories of a 2013 bipartisan open letter that warned of broad destabilization from climate change.

Woolsey currently serves on the board of a renewables technology firm in Silicon Valley, known as Siva Power. And he also has been involved with several policy groups and think tanks focused on energy and national security.

Woolsey’s successor at the CIA, Massachusetts Institute of Technology professor John Deutch, has also been active on energy security and climate risks, serving at the Energy Department under President Carter and on multiple national energy commissions. He penned a 2011 book, "The Crisis in Energy Policy," which highlighted the need to transition from fossil fuels to renewables.