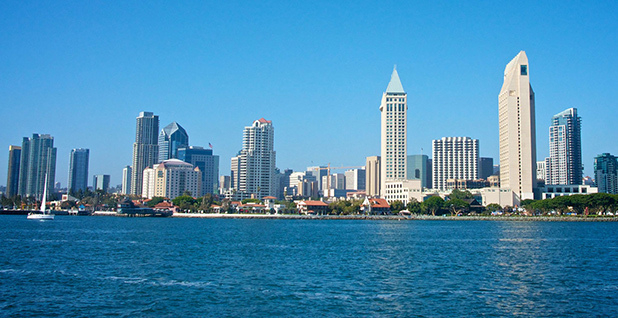 Can San Diego go green by 2035? The jury is still out. Photo courtesy of the General Services Administration.

San Diego says it can hit a target in tackling climate change that would make it a national leader: switching entirely to clean electricity by 2035.

The city approved the goal in December as part of its Climate Action Plan, a road map to cut greenhouse gas pollution in half by that same year. San Diego’s time frame for eliminating fossil fuel-based power makes it among the most aggressive in the nation.

This month, it will release the first outline on how it will roll out its effort. Backers include Republican Mayor Kevin Faulconer, who said the aim is "ambitious" but "achievable." Others say it’s impossible to accomplish in the time allotted. Supporters and critics alike acknowledge that the path forward will be arduous.

San Diego as a key part of its strategy wants to transform how it gets its electricity. It plans to move to community choice aggregation, or CCA, a system that would have it take over the job of buying its power. Locally based investor-owned utility San Diego Gas & Electric Co. (SDG&E) would remain responsible for the grid and delivering electricity, but no longer would purchase it from suppliers.

"That really different business model would be how we’re going to achieve" the 100 percent goal, said City Councilman Todd Gloria, who drafted the climate road map as interim mayor before Faulconer started in 2014. For SDG&E, CCA "would require a business model change that could be pretty drastic for them."

But, Gloria added, "they’re the first to admit that their entire business model is changing drastically whether they like it or not."

Whether San Diego succeeds with both CCA and the clean power goal has broader implications as other cities and states act on climate change. Hawaii, for example, has pledged to go to 100 percent clean electricity by 2045 but hasn’t yet carved out its path. Vermont wants to hit 75 percent by 2032. California and New York have pledged to have 50 percent renewables by 2030.

Meanwhile, at the local level, CCA is growing in popularity. Marin and Sonoma counties in the San Francisco Bay Area have CCAs. CleanPowerSF in San Francisco starts with a limited customer group in May. Other places are considering the change. Under state law, ratepayers automatically become customers of a CCA but can opt out, a means of giving cities bulk buying power.

In San Diego, the push for CCA is likely to trigger a battle with SDG&E. It has filed paperwork with regulators that could allow it to lobby and advertise against CCA. But economists and even green advocates warn that there are complications with San Diego’s plan, beyond battling utilities.

"Anytime an economist hears ‘We’re going to get rid of all pollution’ or ‘We’re going to get all green power,’ not only are they skeptical, but they know it’s not true," Carson said. "By 2035 is within the realm of what most serious people would think is technically impossible."

CCA is one of the mechanisms San Diego said it will use to reach the goals in its climate plan. The city also wants to move commuters to biking, walking or mass transit in congested corridors; synchronize traffic signals to reduce idling of cars; switch the city’s fleet to 90 percent electric vehicles; and institute other measures.

The blueprint breaks down how much each strategy will shrink greenhouse gases, and by which year. Those add up to the required total, said Nicole Capretz, executive director of the Climate Action Campaign, a nonprofit watchdog group. She was director of environmental policy for then-interim Mayor Gloria and helped him draft the road map.

"We’ve mathematically shown how we get to 100 percent," Capretz said. "We had to prove with substantial evidence that every single strategy would add up to the big goal."

San Diego’s blueprint is a legally binding document because it’s part of a plan that goes through the California Environmental Quality Act, or CEQA. That means that the city could be sued for failing to meet the targets, she said.

Capretz also said that the strategies are "high-level," and that the city will put each one through a detailed rollout process.

This month, the city is scheduled to release its implementation plan, a kind of general overview to give the first phase of actions. The Climate Action Plan calls for the city to pass ordinances, and those likely will be tackled one at a time.

Late in the year or early next year, San Diego plans to release a feasibility study that will give more on how it will roll out CCA or a similar plan.

"It’s a stretch goal, but one I think is achievable," Faulconer said of 100 percent renewable power. The city is a leader in the amount of rooftop solar per resident, he said, and "we’re one of the largest adopters of electric vehicles in the country."

Economist Carson with UCSD said it depends on how one counts the 100 percent.

San Diego could generate renewable power and buy enough needed clean energy credits to say that it has hit 100 percent, he said, but that wouldn’t mean the grid was delivering only green power to the city. The city’s not an island, he said. And there will be times at night when solar isn’t generating and no wind is blowing.

Even if the city is signing contracts with power suppliers, SDG&E would have a mandate to keep the lights on, no matter the source of that electricity.

"They have that responsibility even if the CCA’s power generating capacity goes offline," Carson said.

Georgetown, Texas, for example, a town outside of Austin with a population of 50,000, has said that it’s carbon neutral. It generates enough wind and solar power to equal the electricity it consumes. But it’s tied to the grid run by the Electric Reliability Council of Texas, and the city at night sometimes gets its power from sources that include coal- or gas-fired plants (ClimateWire, March 26, 2015).

Another option that could help increase the amount of renewable power that could be used is "massive" energy storage, Carson said, but "that’s not going to happen by 2035."

Carson added that 80 percent renewable power "might actually be a feasible goal," but saying the city can hit 100 percent, "anybody who’s telling that story is deceiving themselves."

CCA gives a city buying power so it can get better prices for electricity, Carson said. But that’s true whether it’s buying power that’s renewable or fossil fuel-generated.

Capretz said the city will have backups for wind and solar, from sources like solar.

"We would have to have solutions to any of the intermittency problems," she said. "That has to be part of our 100 percent clean energy portfolio. … We would be purchasing the contingency for intermittency that would be part of the program for CCA."

The plan does count on technology changes between now and 2035, she said.

"In 20 years, the whole market’s going to shift, and what’s available and what’s possible is going to change," Capretz said. "If we could do it today, we’d just say by 2020 we’re going to have clean energy."

Tim O’Connor, director of the California Oil and Gas Program at the Environmental Defense Fund, said there’s a need for more specifics from San Diego.

"What we’ve seen thus far is obviously a tremendous amount of desire and lofty goals," O’Connor said. "The road maps to get there so far have been a little thin."

However, he noted that the state’s pricing system for energy also needs to change to support the push for more renewable power use. There needs to be better compensation for energy storage and demand response, or getting users to cut power consumption when needed, he said.

"What we know is the goal will not be met if we do not have market changes," O’Connor said.

Pete Hasapopoulos, organizer of the Sierra Club’s My Generation campaign, said that if San Diego is close to its goal but doesn’t meet the 100 percent renewables target by 2035, it’s unlikely groups will file lawsuits against the city.

Many expect SDG&E, a subsidiary of Sempra Energy, to fight the city’s push for CCA.

That’s based partly on history involving another utility. Pacific Gas and Electric Co. (PG&E) in 2010 sponsored Proposition 16, which would have mandated support from two-thirds of voters before cities could start buying electricity. PG&E spent more than $46 million to try to pass it. The measure failed at the ballot box.

Allison Torres, spokeswoman for SDG&E, said that "we support our customers’ right to choose." Beyond that, the utility can’t comment on CCA or how it would affect SDG&E, she said.

The state now bars utilities from talking about CCA unless it’s done through a separate affiliate, funded by shareholder dollars. SDG&E in November told the California Public Utilities Commission (CPUC) that it was creating just such an affiliate. SDG&E is the first utility in the state to make the move. CPUC said it’s reviewing the filing.

The utility in paperwork given to CPUC said that its inability to talk about CCA was creating an "informational vacuum" for those "who are trying so hard to pursue the right path toward a greener energy future."

"We from the community side are happy" that there’s a delay in the company’s ability to talk about CCA while the state considers the application, Capretz said.

"We can’t compete against the deep pockets of Sempra," she added. "We don’t have that ability to fight back against any smear campaign or marketing they do."

The Sierra Club is deploying volunteer teams around the city, working to teach residents about how CCA would function, Hasapopoulos said.

"We’re going to see a groundswell of support," he said.

San Diego hopes to halve its greenhouse gas emissions by 2035 and has outlined an ambitious plan to get there. Data courtesy of the city of San Diego.