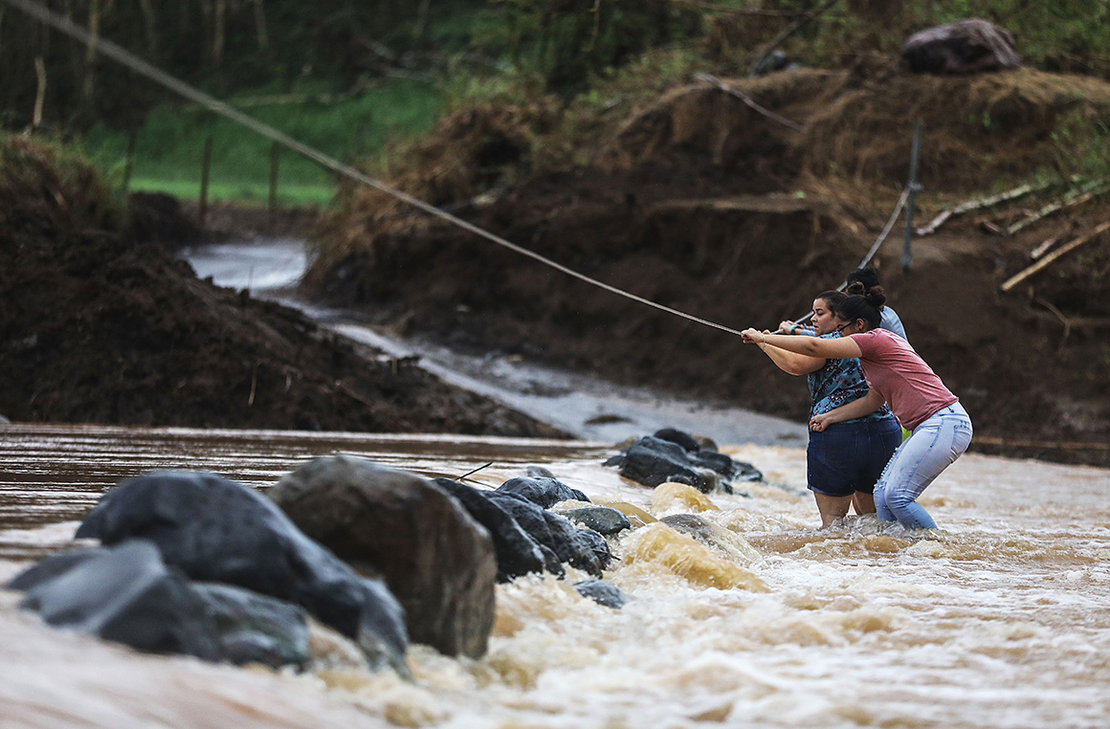 People are pictured use a rope line to cross a river in Puerto Rico two weeks after Hurricane Maria caused widespread damage in 2017. Mario Tama/Getty Images

The U.S. Commission on Civil Rights is investigating possible discrimination in the federal response to hurricanes that devastated Puerto Rico and Texas in 2017, marking the first time the panel has probed the nation’s disaster policies.

The commission, an eight-member advisory panel that has exposed environmental injustice in federal agencies, has launched inquiries into the “civil rights implications” of Hurricane Maria, which demolished Puerto Rico, and of Hurricane Harvey, which caused massive flood damage in the Houston area.

The inquiries focus on the Federal Emergency Management Agency — the nation’s lead disaster response agency — and the Department of Housing and Urban Development, which has a secondary role that involves distributing billions of dollars of federal aid for rebuilding.

The bipartisan commission has no regulatory authority. But its investigations could pressure federal agencies and Congress to change policies if the commission determines that they are discriminatory toward racial or ethnic minorities or harmful to other groups such as people with disabilities.

“This is an important turn because the [commission] hasn’t held formal inquiries on any disaster before,” said Carlos Martín, an expert on disaster policy at the Brookings Institution. “It’s another step in pushing for accountability by FEMA.”

The commission’s inquiries “could be big, depending on what the final reports state,” Martín said.

In 2016, the commission’s investigation into the disposal of coal ash — the hazardous waste created by coal-fired power plants — produced testimony showing that the waste sites were located overwhelmingly in or near low-income, predominantly Black neighborhoods. The commission’s final report found that EPA rules on coal ash disposal disproportionately harmed the neighborhoods.

More recently, a 405-page commission report in September on maternal health found that racial disparities have grown over the past 30 years and that most maternal deaths are preventable.

Regarding disasters, the commission has gathered extensive testimony from experts and aid organizations describing how people of color and low-income residents in Texas struggled after Hurricane Harvey to qualify for FEMA aid and rebuild their lives.

Francisco Sanchez, deputy emergency management coordinator for Harris County, Texas, told the commission at a hearing in late October that FEMA aid is inadequate to repair homes of people without property insurance, and is inaccessible because application forms are confusing.

“The process needs to be simple, transparent and completely trackable so that residents understand the qualifications, the process and their status in that system,” said Sanchez, who is also president of the Emergency Management Association of Texas.

In March, a Texas-based advisory committee to the Civil Rights Commission issued a blistering report describing how Harvey and the federal response had exacerbated racial and ethnic disparities in wealth, income and housing.

“Aid distribution policies and decisions had a disparate impact on marginalized populations and contributed to widening wealth inequality,” the report found.

In June, the commission held a hearing featuring testimony from FEMA officials on the agency’s challenges in providing aid and complying with civil rights requirements after Harvey and Maria.

It is unclear if the commission is planning to issue one report covering both storms or separate reports for the two hurricanes. FEMA has acknowledged failures in its response, saying it was overwhelmed by three near-simultaneous events: Harvey, Maria and Hurricane Irma in Florida.

The commission’s probes come as FEMA is undertaking an unprecedented internal analysis of potential discrimination in its programs and has revised some policies in an effort to make it easier for low-income individuals and communities to receive disaster aid.

Many of the complaints received by the commission so far echo comments made to FEMA this year when the agency asked the public to suggest policy changes that would make disaster aid more accessible to underserved communities and more responsive to climate change.

At the commission hearing on Hurricane Harvey, witness comments focused on the logistics of applying for and receiving federal disaster aid.

Many low-income Texans seeking FEMA aid “struggled with technology, internet access and lived in rural areas where there was no public transportation,” said Texas RioGrande Legal Aid attorney Brittanny Perrigue-Gomez. “This often left them relying on others to drive them, driving a vehicle that was unreliable due to disaster caused damage or without access to FEMA and other disaster agencies at all.”

The testimony also raised questions about FEMA’s long-standing policy of providing limited home repair funds to people whose houses are damaged by a flood, hurricane or other disaster. FEMA gives uninsured homeowners in disaster areas up to $36,000 to make their residence “safe, sanitary and fit to occupy.”

The FEMA money is not intended to pay for full repairs. Sanchez of Harris County said, “The unintended consequence of this is residents being forced to remain in substandard or damaged homes while waiting for assistance.”