Claim of ‘2-for-1 on scapegoating’ clouds border hearing 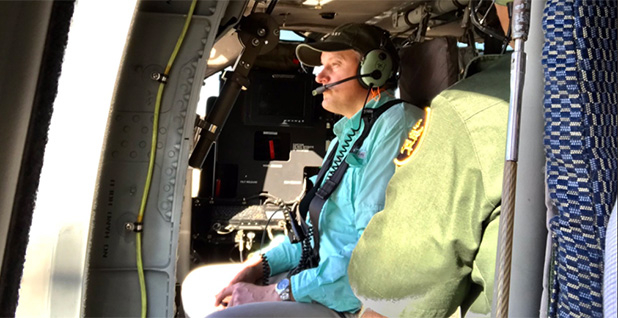 In a hearing that was briefly sidelined over an argument about racism, lawmakers yesterday sparred over whether environmental regulations hamper U.S. Customs and Border Protection agents along the nation’s southern boundary.

The nearly two-hour hearing by the House Natural Resources Subcommittee on Oversight and Investigations debated whether applying environmental laws to public lands along the nation’s 2,000-mile border with Mexico creates hurdles for CBP officers.

The panel also discussed the impacts of cross-border traffic, including litter and illegal roads and trails.

"If the Border Patrol does not have access, we cannot do our job with security," said Bishop, who has long called for waiving environmental laws and regulations within 100 miles of the border. "It’s not the same thing as a wall, but that access becomes significant, and our environmental laws inhibit that access from taking place."

But in the midst of debate, the session came to a grinding halt as Texas Rep. Louie Gohmert (R) disputed remarks made by California Rep. Jared Huffman (D).

"Environmental protections and bedrock environmental laws like [the National Environmental Policy Act] are in place so that we can protect communities and the resources they depend on and provide an opportunity for public input into land management decisions," Huffman said as he prepared to question witnesses.

"Unfortunately, although I’ve heard my colleagues across the aisle say many times that local voices are the most important," Huffman said, "it seems that it’s only certain voices that matter."

He added: "Today it looks like we’re having a blue-light special: a two-for-one on scapegoating. We get to scapegoat environmental laws and Mexicans at the same time. What an irresistible opportunity for this authoritarian agenda."

That prompted Gohmert to interrupt, asking, "Are you accusing me of scapegoating Mexicans, or someone else?"

Huffman responded: "Yes. The entire hearing, Mr. Gohmert. Why don’t you rant about it on your own time?"

Gohmert asked for Huffman’s words to be "taken down," a procedure under House rules in which members can object to another lawmaker’s remarks and ask to have them amended or stricken from the record.

"He has impugned my motivation, and it’s entirely inappropriate. It violates the rules of decorum of the House, and it’s simply not true. I did not scapegoat any Mexicans," Gohmert said.

Following several minutes of silent delay as Westerman and committee staff attempted to resolve the issue, Huffman clarified that he intended his comments as a rhetorical statement and not a comment "on any member’s personal motivations."

Though the hearing continued, Gosar later revisited the issue while questioning witnesses.

"I guess I’m the racist. Because that’s what was said here," Gosar said. "It’s disingenuous for my colleagues on the other side to say that. Over and over again that’s all I hear. You know what? There’s an old analogy. Look in the mirror: The enemy is me."

‘Giving one an upper hand over the other’?

The hearing did not, however, including representatives from the Trump administration, including the departments of the Interior, Agriculture or Homeland Security.

The Interior Department manages nearly 800 miles of border territory, or about 40 percent of the boundary as it crosses California, Arizona, New Mexico and Texas.

In addition, within 100 miles of the line, Interior oversees more than 25 million acres of public lands, including six wildlife refuges, lands held in trust for four American Indian tribes, a half-dozen national parks and Bureau of Land Management districts.

But the actions of CBP agents within the borderlands — or the 100-mile region extending from the border itself — are governed by a 2006 memorandum of understanding among DHS, USDA and Interior.

Bishop has also advocated for that memorandum to be revisited, arguing that CBP agents are disadvantaged by environmental regulations such as NEPA and the Endangered Species Act.

"Each border area is different, and having a one-size-fits-all MOU probably does not meet all the circumstances," Bishop said. "In each of these sectors, what we really need to have for the Border Patrol to be effective is give them flexibility to meet the differences of those situations and give them access."

Proponents of waiving environmental regulations for law enforcement agents argue that illegal border crossings already cause ecological and environmental damage in the form of wildfires, soil erosion and copious quantities of litter.

But Nicol disputed arguments that concerns about litter fall short of damage caused by new barriers or construction of roads, including flooding and blocking wildlife corridors.

"You have two different agencies that are responsible for work in a given area; they should be working together. … Giving one an upper hand over the other is not helpful in any way," Nicol said.