Claims court warns: Scams on the rise during pandemic 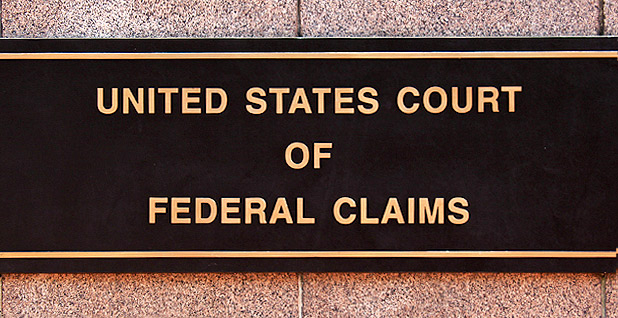 A sign outside the U.S. Court of Federal Claims building in Washington. Tim Evanson/Flickr

The low-profile but powerful federal court that handles some big-ticket public lands and natural resources cases is cautioning people to watch out for frauds and scams amid the coronavirus pandemic.

In an emphatic red-letter notice, the U.S. Court of Federal Claims now greets visitors to its webpage with the declaration that the court "DOES NOT call, email, or send letters requesting money, gift cards, or personal identifying information."

The court, located a block from the White House, is raising alarms, in particular, about scammers exploiting a vaccine compensation program. The newly posted warning, though, also comes as government officials more broadly combat the growing prospect of pandemic crime.

"The Department of Justice will not tolerate criminal exploitation of this national emergency for personal gain," Assistant Attorney General Jody Hunt said earlier this month. "We will use every resource at the government’s disposal to act quickly to shut down these most despicable of scammers."

Hunt’s declaration accompanied the Justice Department’s first-of-its-kind civil action against a website that claimed to offer World Health Organization vaccine kits in exchange for a shipping charge of $4.95. There are no legitimate vaccines for COVID-19, the disease brought by the novel coronavirus.

Overseen by judges appointed to 15-year terms, the U.S. Court of Federal Claims rules on a wide array of contract, property and other claims against the federal government.

Last week, for instance, a claims court judge rejected an assertion from the city of Fresno, Calif., and nearby irrigation districts that the Bureau of Reclamation violated constitutional property rights when it did not deliver water during a drought (Greenwire, March 26).

The court’s significant reach, combined with the federal government’s extraordinarily sweeping pandemic response, makes it all but certain that it will see coronavirus-related cases.

It can hear a variety of specialized claims against the federal government involving contracts, bid protests, military and civilian pay, takings, vaccine injuries, and patents and copyrights, among other issues.

During fiscal 2019, the court reported it disposed of 637 complaints and 829 vaccine petitions. It awarded judgments totaling more than $328 million.

Last September, for instance, Court of Federal Claims Judge Thomas Wheeler ordered publication of a settlement that ended three lawsuits alleging mismanagement of land held in trust for members of the Quapaw Nation. The polluted land is now an EPA Superfund site.

The settlement agreement that the Trump administration had sought to keep private called for a $59 million federal payment to end two lawsuits and a recommendation for a $137.5 million payment to resolve a third suit (Greenwire, Nov. 18, 2019).

Although the court’s origins date back to the mid-19th century, Congress in 1988 stretched its reach to include the Vaccine Program. This is a no-fault compensation program for persons allegedly suffering injury or death as a result of the administration of certain compulsory childhood vaccines.

On March 27, a fairly typical day, five vaccine-related claims were filed. Only limited case details sometimes become public, as parents and others pursue compensation for side effects attributed to the tetanus, diphtheria and acelluar pertussis, or Tdap, vaccine, among others.

"Vaccine Program petitioners SHOULD NOT provide money, or ‘a tax payment,’ to anyone in exchange for a Vaccine Program settlement check," the court warns, "even if the request allegedly comes from the Department of Health and Human Services, the Vaccine Program, the Office of Special Masters, or the United States Court of Federal Claims."