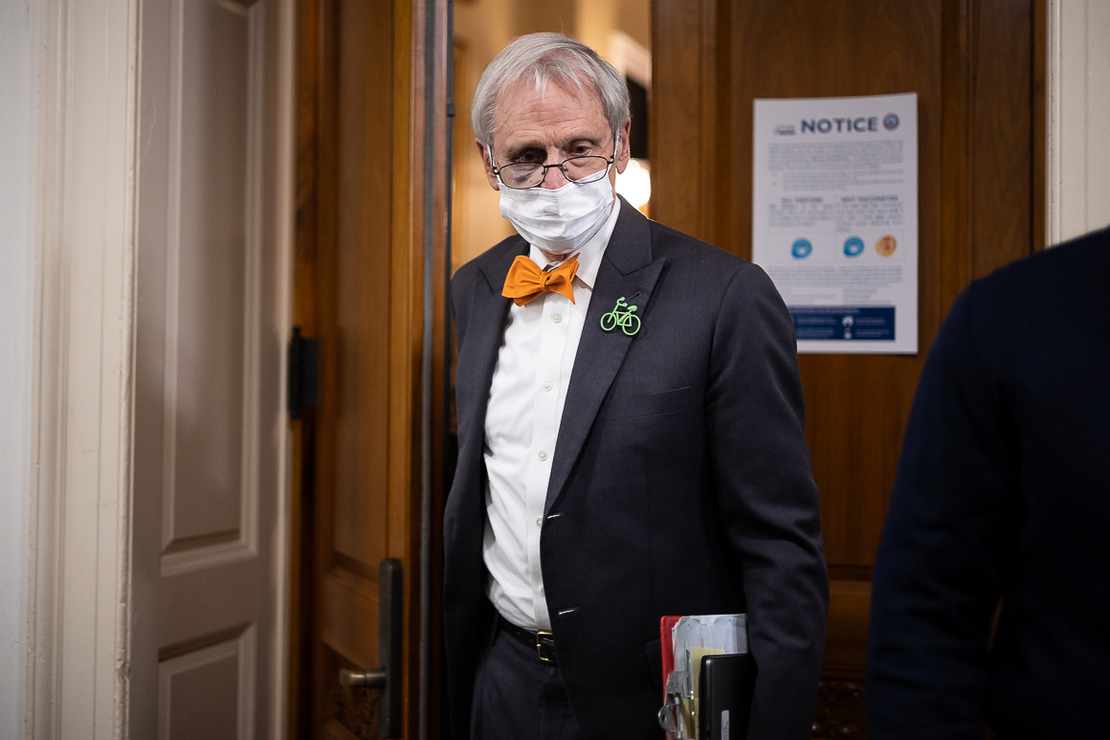 Renewable energy interests and advocacy groups are scrambling to secure changes to the $1.75 trillion reconciliation package over worries that tax provisions in the bill may inadvertently hurt clean energy development.

Lobbyists and like-minded advocates are taking aim at several provisions in the massive package expected to come up for a vote in the House as soon as this week. They argue the revisions they are seeking align more closely with the emissions-reducing focus of President Biden’s Build Back Better agenda.

Of particular concern is the inclusion of a corporate alternative minimum tax (AMT) in the House’s reconciliation package.

The provision, authored by Senate Finance Chairman Ron Wyden (D-Ore.) and Sens. Elizabeth Warren (D-Mass.) and Angus King (I-Maine), would ensure that corporations that report more than $1 billion in profits to shareholders annually pay a 15 percent tax rate on those profits.

The plan is estimated to raise hundreds of billions of dollars over a decade to offset the cost of the reconciliation package. Its inclusion is a response to outcries that highly profitable companies like Amazon.com Inc. that have paid little or no federal income tax in recent years.

“Giant corporations have been exploiting tax loopholes for too long, and it’s about time they pay their fair share to help run this country, just like everyone else,” Warren said in a statement on the plan last month.

The proposal is notably supported by Sen. Kyrsten Sinema (D-Ariz.), who has balked at other Democratic proposals to hike taxes on corporations and the wealthy. Democrats are carefully courting Sinema and Energy and Natural Resources Chair Joe Manchin (D-W.Va.) to support the reconciliation push in the evenly divided 50-50 chamber.

But clean energy interests say the manner in which the provision is currently written may unwittingly undercut development in the sector.

While the proposal would protect key renewable energy tax credits when calculating corporate profits for the AMT, it would not exempt accelerated depreciation benefits associated with those tax incentives, which under current law act as an additional tax benefit that lowers the costs of renewable projects.

For example, in the case of the investment tax credit (ITC) for solar, depreciation would provide about $3.15 in additional benefit on a $100 investment on an after-tax basis.

Because the vast majority of banks that provide financing to renewable projects through tax equity markets would be subject to the AMT as proposed in the reconciliation bill, the loss of the depreciation benefits would have to be addressed to allow projects to proceed.

“If you rely upon tax equity for your solar project but your tax equity partner can’t take advantage of the depreciation benefits that they do today because of the AMT, then they’re going to ask to get paid somehow or they’re not going to do the deal,” said one renewable energy sector official who insisted on anonymity to discuss the matter.

The discrepancy means that banks could simply offset the added expense from the value of the credit, which in the case of solar would nearly negate the restoration of the full 30 percent ITC contained in the "Build Back Better Act."

Wind projects would be affected on an even larger scale because of differences in the manner in which depreciation is calculated.

The American Clean Power Association has estimated that the loss of depreciation benefits will lead to a 15 to 20 percent increase in the cost of clean energy and an additional 820 million metric tons of carbon dioxide, an official with the group told E&E News last week.

Rep. Earl Blumenauer (D-Ore.), a senior member of the tax-writing Ways and Means Committee, is working to fix the issue, his office confirmed yesterday.

“We don’t have any time to waste in our transition toward clean renewable energy, and this is a real concern,” Blumenauer said in a statement. “I’m working with my colleagues in the Senate to ensure that the climate provisions of this legislation are as bold and robust as possible, including by allowing accelerated depreciation to offset the Corporate Alternative Minimum Tax.”

It’s hardly the only change being sought to the tax title. A coalition of environmental justice and renewable advocates is also pressing tax-writers to make a residential solar tax credit in the bill refundable to homeowners by 2023, rather than 2024, as is directed by the bill.

However, the frailty surrounding the reconciliation process — especially when it comes to offsetting the measure’s cost — makes it far from certain that any changes will be forthcoming even though lawmakers may be sympathetic to their plight.

“Some of the suggested pay-fors have consequences that materially impact some of the same industries that they’re trying to help,” said another renewable energy official who supports changes to the AMT proposal. “And I think they are exploring if there is a possibility to improve the provision without the whole thing unraveling.”

Lawmakers are also facing pressure from labor groups, environmentalists and utilities for another change to the ITC, which supporters say will further speed clean energy deployment and reduce emissions.

Multiple interest groups say that the long-term extension of the ITC in the "Build Back Better Act" should include an “opt-out” provision for normalization requirements for storage and transmission projects.

Regulated utilities must comply with normalization rules, which generally require them to spread the benefits of tax credits out over many years. But normalization does not apply to independent power producers, which are therefore better equipped to use the full credit of a tax incentive.

Critics argue that normalization has served as a disincentive for utilities to deploy cleaner energy by making it more expensive for customers.

In a recent blog post, clean energy think tank RMI concluded that including an opt-out for normalization would save about $150 million over the course of a technology’s lifetime for every $1 billion invested.

“In other words, not including a normalization opt out provision would increase costs by about 15 percent for new transmission and storage,” RMI concluded.

Additionally, the nonprofit group concluded that allowing utilities to opt out of tax normalization could reduce carbon emissions by an additional 50 million metric tons annually — equal to about 3 percent of current electric power emissions — while also saving ratepayers $1 billion annually by 2030.

RMI is part of a coalition pressing congressional leaders to add an opt-out-of-normalization provision to the reconciliation bill, along with the Center for Climate and Energy Solutions, Environmental Defense Fund, Natural Resources Defense Council, Sierra Club and Union of Concerned Scientists.

Labor groups have weighed in in support of an opt-out as well. The International Brotherhood of Electrical Workers earlier this month urged top House and Senate Democrats to include an opt-out to help preserve union jobs.

“In most cases, regulated electric companies, not developers, are hiring union workers when energy projects are being built,” the group wrote. “If an opt-out provision is not included, the developers will have an unfair competitive advantage that threatens union work and the prevailing wages that IBEW workers rely on.”

Also supporting an opt-out of “outdated normalization requirements” is Berkshire Hathaway Energy, which noted the economic and environmental benefits of doing so.