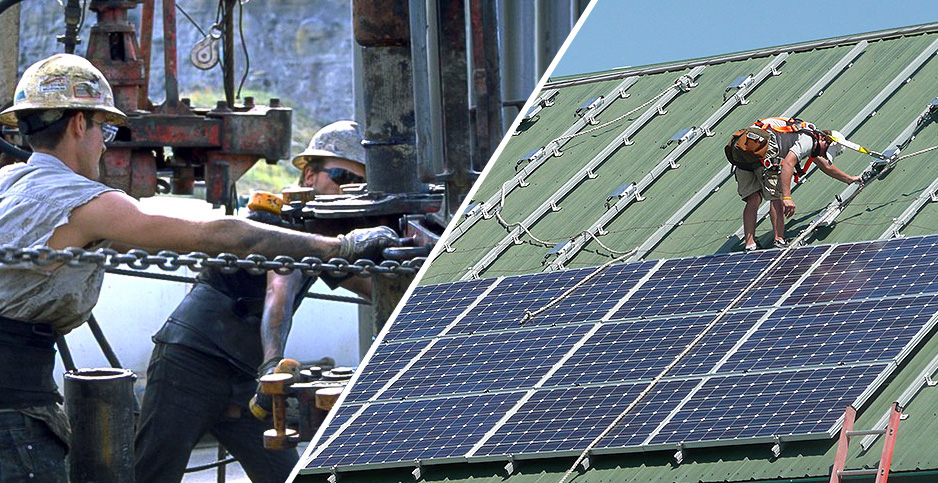 Unions and clean energy advocates weighed in yesterday on how to manage the transition from fossil fuel to clean energy jobs. Bureau of Land Management (oil workers); Department of Agriculture/Flickr (solar)

As President Biden plans a global summit this week to tackle climate change, two wings of the president’s coalition — clean energy and labor — made it clear yesterday that although they’re aligned on major parts of the White House’s green energy plans, they diverge sharply on others.

Both groups are critical to Biden’s political success and agree that his infrastructure plan and any resulting legislation should be designed to encourage union labor and local jobs. The two sides also agree it’s a priority to bring manufacturing back to American shores, including heavy industry like steel, and that there is a role for capturing carbon emissions.

But they have very different visions on the role of renewable energy. Clean energy advocates see it as central, while unions that heavily rely on fossil fuels see it playing a minor role.

"Natural gas is in the Democratic platform," Mark McManus, president of the United Association of Plumbers and Pipefitters, said at a seminar yesterday sponsored by the Labor Energy Partnership, a group chaired by AFL-CIO President Richard Trumka and former Obama-era Energy Secretary Ernest Moniz. "It’s more than a bridge. We can argue about how long that bridge is, but that is where we need to be if we want to be realistic about this."

At the same time, E2, which represents clean energy business and environmental groups, used the occasion of its annual jobs report to point out that clean energy jobs today exist everywhere in the country. It lined up behind Biden’s belief that more of them are essential to a transition.

"The shift to a cleaner economy would create major new opportunities for job seekers in every state — including in communities impacted by the ongoing decline of other parts of the energy sector such as coal, oil and gas," the report said.

At a separate virtual event, the group called on Congress to take a sweeping set of actions, including tax credits to spur the market for electric vehicles and big investments in electric grid modernization, energy research and worker training.

Speaking at the labor event, Energy Secretary Jennifer Granholm said the administration’s goal of zero-carbon energy would take "millions of people getting to work," but she acknowledged that many green energy jobs don’t have labor protection.

"We know that too often today some of those clean energy construction jobs aren’t going to union labor, if we’re going to be honest about it," Granholm said. "We are committed to do something about that."

She said Biden’s infrastructure plan would connect clean energy tax credits to good labor standards, and she said it puts a priority on U.S. manufacturing.

Union officials said they are broadly supportive of the administration’s plans but made it clear they’re expecting more than promises and job training programs.

"As we transition to clean energy, we’re not going to give up an inch or sacrifice a dollar for false promises of just retraining," Trumka said. "We’ll fight climate change with everything we have, but we simply won’t allow the transition to be done on our backs."

Trumka called for job creation, "up front, not to be determined," and a jobs plan in every community that will lose coal or power plant jobs.

"Calling it a green or a clean job doesn’t make it a good job," he said, adding that workers in the renewable energy sectors need a path to organize. "Equitable clean energy means universal labor rights and local opportunities for every person and every place in America."

And Lonnie Stephenson, a member of Biden’s Climate Engagement Advisory Council and the international president of the International Brotherhood of Electrical Workers, said that "too many of the new renewable jobs aren’t necessarily union jobs." Lawmakers need to tie renewable tax credits to "strong labor protections," including prevailing wage laws, said Stephenson.

Manchin, mining and the ‘just transition’

Granholm said the administration is expecting to soon release a report on ways it will try to revitalize coal communities and others hardest hit by the transition to cleaner energy.

"Not just training benefits, we want to get job providers to locate in these communities," she said.

Biden’s $2.3 trillion infrastructure plan calls for Congress to pass the "Protecting the Right to Organize (PRO) Act," which would boost workers’ ability to organize unions and collectively bargain.

Also yesterday, the United Mine Workers of America (UMWA) made a statement that agreed with some of Biden’s goals, but with different solutions and a great deal of skepticism.

"This cannot be the sort of ‘just transition’ wishful thinking so common in the environmental community," the statement said. "There must be a set of specific, concrete actions that are fully-funded and long-term."

In a warning sign to Biden, the actions sought by the miners have little to do with solar or wind power.

The kind of jobs being discussed in Washington aren’t yet union jobs and "don’t pay but a fraction of what a coal miner makes," UMWA President Cecil Roberts said on a webinar with the National Press Club.

Its plan involves measures that increase demand for coal. It calls for expanding funding for carbon capture and storage and the infrastructure to transport sequestered carbon, and resuscitating the U.S. steel industry, which is a heavy coal user. It asks for assistance to make up for coal miners’ lost wages and for education assistance, perhaps paid for with a surcharge on electricity bills.

The only role for clean energy in the plan is tax credits to incentivize its manufacture in coal country.

The E2 report, meanwhile, detailed how the pandemic affected the clean energy industry in 2020. Overall, employment dropped by 6%.

Energy efficiency made up a huge part of the story because it accounts for a whopping 69% of the sector. Employment in energy efficiency dropped by 11%, mainly because lockdowns made it hard to enter homes and businesses. The solar industry lost jobs for the same reasons but didn’t see that magnitude of losses.

The only industries to come out ahead in 2020 were wind, which saw a modest growth of 2,000 jobs, and electric vehicle manufacturing, which grew by 3% and added over 12,000 jobs.

Those electric vehicle gains "would not have happened if companies like Ford, GM and VW had not decided in the latter half of last year to embrace EVs," said Bob Keefe, E2’s executive director.

But Sen. Joe Manchin (D-W.Va.) expressed frustration at the labor event that so much of the infrastructure plan calls for EVs when the U.S. has little control over the conditions for those mining minerals used in car batteries.

"Who is going to tell the families who are being enslaved in Angola, keep digging?" Manchin asked. "There’s no responsible resource sourcing. Why don’t we do things that we have control over?"

The administration is scheduled to hold the climate summit virtually on Thursday and Friday and is expected to announce a goal of slashing U.S. carbon emissions in half by 2030.

"This Thomas bus is a model for the country and the world on what is possible," she said of the buses that can run a full day, depending on the route.

Biden will participate today in a virtual tour of the Proterra electric battery facility in South Carolina and deliver remarks.

Granholm in January said she would step down from her board position with the electric transit bus manufacturer, a leadership post she had held at the company since 2017.

Beyond the labor and green energy groups, environmentalists called on the administration to stop exporting fossil fuels, protesting outside the Department of Energy and delivering a letter signed by more than 230 groups calling on Biden to ban crude oil exports.

"There’s a dramatic disconnect between President Biden’s climate and environmental justice ambitions, and the reality of our oil and gas exports market run amok," said Melanie Oldham of Citizens for Clean Air and Clean Water in Freeport, Texas.

Moniz announced at the event that Breakthrough Energy, an organization led by Microsoft Corp. founder Bill Gates, will back the Labor Energy Partnership and that it plans five regional workshops, focusing on metals and minerals for clean energy technology in the Rocky Mountain West, hydrogen in the Carolinas, carbon capture and storage in the Ohio River Valley, nuclear in the Upper Midwest, and resilient infrastructure in the Gulf of Mexico.