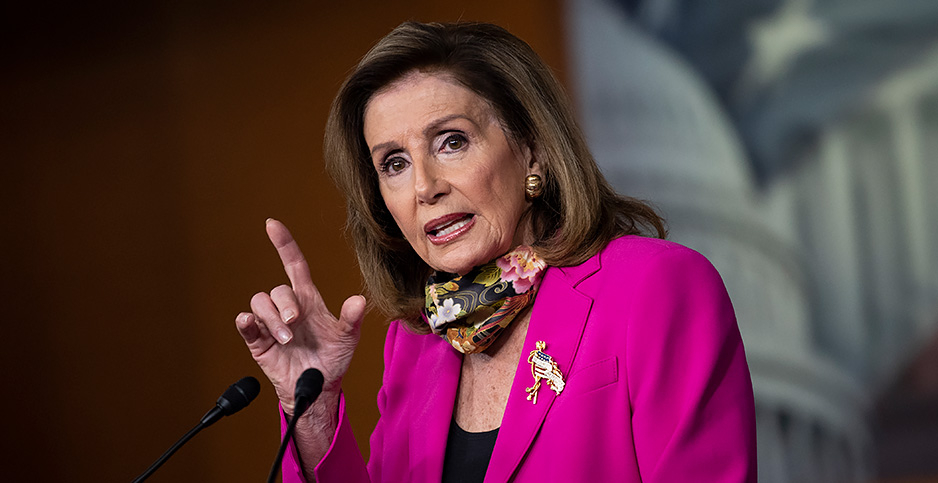 Bills could pass both the House and Senate this week in the push to enact a clean energy policy overhaul to address climate change and other concerns. Still, obstacles to the measures’ becoming law remain high.

The House is set to vote on H.R. 4447, a broad package unveiled this month, but there is creeping apathy among progressives for the legislation.

The Senate’s energy reform package, S. 2657, has been stalled for months and gaining momentum, but politics surrounding the new Supreme Court vacancy may affect its prospects.

Speaker Nancy Pelosi (D-Calif.) on Friday cited the ongoing wildfires in California and Oregon and the spate of hurricanes that have hit the Gulf Coast as "Mother Nature’s statement." The speaker tied the events to climate change and touted the House’s package as part of the response.

"America can no longer afford to deny the connection between the climate crisis and the wildfires, no longer be in contempt of the science that tells us why these storms are battering the Gulf Coast are so severe — severest in history, the one that hit Louisiana," she told reporters.

The package builds on two years of work from the House Science, Space and Technology Committee and Energy and Commerce Committee.

With spending boosts and new demonstration projects, the package looks to buttress a host of clean energy technologies through Department of Energy research and development (Greenwire, Sept. 15).

Much of the legislation has bipartisan backing, but late additions — including $25 billion in electric vehicle infrastructure grants — may diminish support.

House leaders have generally described the package as a down payment on broad clean energy action, along with a recently approved infrastructure measure, H.R. 2. But unlike with H.R. 2, conference negotiations with the Senate are possible on an energy package.

"We are trying to align with some bipartisan initiatives in the Senate," said Rep. Kathy Castor (D-Fla.), who chairs the House Select Committee on the Climate Crisis. "The Senate has been such a roadblock to everything we are trying to do. If we can align on a few noncontroversial items, that would be a plus."

The talks appeared to be part of an effort to find a way forward on the Senate energy package and a possible amendment on voluntary building codes.

The Senate Environment and Public Works Committee recently announced a deal on hydrofluorocarbons, which had stalled the bill earlier this year (E&E Daily, Sept. 11).

Now opposition to building code language from Portman and Shaheen is proving a hurdle. Conservatives and the National Association of Home Builders are adamantly opposed (E&E Daily, Sept. 17).

Last week, Murkowski said that once the building code issue is resolved, the Senate could finish up its consideration of the energy package in an afternoon.

However, Murkowski’s involvement with the bill may complicate its progress. The Alaska senator is challenging Majority Leader Mitch McConnell (R-Ky.), President Trump and most other Republicans in opposing consideration of a Supreme Court nominee so close to the elections. Trump already made known his displeasure in a tweet this weekend.

McConnell and the president’s push to debate and vote on a Supreme Court nominee this year further shrinks the legislative space available for energy.

Meanwhile, a group of progressive environmental organizations — including Food & Water Watch, the Center for Biological Diversity and Friends of the Earth — sent a letter to lawmakers Friday asking them to oppose the House bill.

A top concern is language promoting carbon capture and sequestration technology, which they argue would only prolong the use of fossil fuels.

"Any benefits from the critical steps to support environmental justice in the proposed legislation are undermined by provisions encouraging carbon capture sequestration (CCS) and other false climate solutions that perpetuate our dependence on fossil fuels and the burden on frontline and communities of color," they wrote.

Karen Orenstein, director of climate and energy at Friends of the Earth, said it’s troubling to see Democrats advancing the legislation as a "clean energy bill."

"I sort of look at this as if someone said we must uphold human rights and allow torture," Orenstein said.

It also makes little sense for House Democrats to push for talks with the GOP Senate, when they could soon control Congress and the White House, said Brett Hartl, government affairs director at the Center for Biological Diversity.

"Why would you do this now if the election is five weeks away? Why don’t you just wait and see?" Hartl said. "You might have a lot more leverage in two months, and frankly, even then, I still think it’s a bad idea, because why make a deal that you have to have Donald Trump sign in a lame duck?"

In a twist of political gamesmanship, that same rhetoric was the downfall of the last major effort to update the nation’s energy laws — a feat not accomplished in over a decade.

House Republicans walked away from negotiations with the Senate at the end of 2016 in part due to a lack of interest after Trump won the presidency.

Politics means that a successful conference this year, if it ever gets launched, is uncertain at best, said Heather Reams, executive director of Citizens for Responsible Energy Solutions, a conservative clean energy group that has supported the Senate bill.

"We are hot into the political season, unfortunately, which is very frustrating for advocates and supporters who have worked really hard on this bill," Reams said, adding that it would have a "better chance" after the election in the lame-duck session.

House Republicans have not come to the defense of the bill, either. "There’s a few bipartisan slivers in there, but we are really just treading water," said Rep. John Shimkus (R-Ill.), ranking member of the Energy and Commerce Subcommittee on Environment and Climate Change. "We’re just trying to make work, make it appear to the public that we are really working."

Despite concerns, members of both parties have filed amendments to the House package. More than 140 amendments are pending, and the Rules Committee will meet this afternoon to discuss which ones to make in order.

Rep. Michael Burgess (R-Texas) readied one that would extend the construction deadline to qualify for the credit an additional two years to 2026.

Reps. David McKinley (R-W.Va.) and Marc Veasey (D-Texas) proposed an amendment that would take that construction start date out to 10 years.

Rep. Adam Kinzinger (R-Ill.) introduced an amendment to suspend Nuclear Regulatory Commission licensing fees for one year to help the industry in the face of the COVID-19 pandemic.

House Democrats have also looked to beef up the bill with additional climate provisions, including: