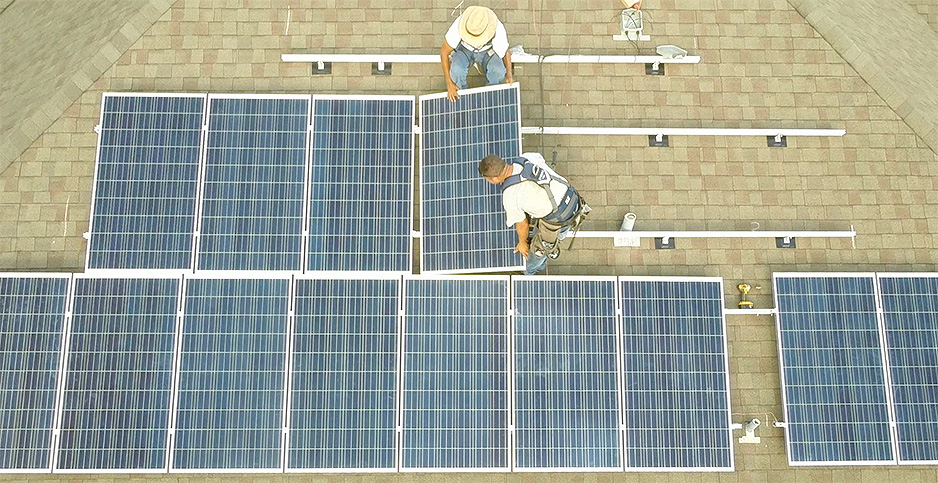 Clean energy industries could lose nearly a sixth of their workforce due to economic fallout from the coronavirus, according to industry estimates. Rooftop solar installers are pictured. PosiGen Inc.

Clean energy industries lost more than 106,000 jobs last month due to the novel coronavirus pandemic and could end up shedding over 15% of their entire workforce this quarter, according to a report released yesterday.

The analysis — commissioned by advocates E2, the American Council on Renewable Energy (ACORE) and E4TheFuture — found that clean energy companies last month laid off the equivalent of last year’s entire 3% gain in employment. That did not include the hundreds of thousands of employees who had been furloughed or had their hours cut. The report included the renewable, electric vehicle, low-carbon fuel, energy efficiency and energy storage sectors.

"Sadly, we know for certain that, given historic jobless claims in April, this is just the beginning. April is expected to be much worse," said Phil Jordan, vice president and principal at BW Research Partnership, a California-based economic research firm that conducted the analysis for the groups.

"We’re projecting at least a half a million jobs to be lost in clean energy in the second quarter," he said on a webinar.

The firm examined Labor Department data on clean energy job losses through the second week of March and projected it through the rest of the month using total unemployment claims. That data was then filtered through state- and sector-level data published in a recent "U.S. Energy and Employment Report" by the Energy Futures Initiative.

The epicenter was in California, which lost nearly 20,000 employees — almost three times more than any other state.

But other states suffered greater losses on a percentage basis. In Pennsylvania, for instance, more than 6% of clean energy workers had filed for unemployment though March, compared with 3.6% in California.

Nationally, the situation was particularly grim for Latinos, who constituted nearly a quarter of those who lost their jobs, although they composed about 14% of the workforce.

At the end of March, state governors expanded work stoppages and shelter-in-place orders, and manufacturers suspended production across the country. An additional wave of unemployment filings is expected to follow from clean energy workers, the report said, pointing to Federal Reserve estimates of as many as 52 million job losses by the quarter’s end.

Since the pandemic began, a procession of gloomy analyses from virtually every corner of the clean energy world has followed. On Tuesday, for instance, the Energy Storage Association (ESA) released the results of a survey finding that 63% of companies expected to lose 20% or more of their revenues. About a quarter said they expected to reduce their workforces.

"[I]t is clear our industry is suffering with immediate and significant risks of workforce reductions and economic damage," said Kelly Speakes-Backman, CEO at ESA, in a statement.

‘The economic tailspin is so massive’

The groups behind the BW report are pushing for the federal government to intervene. On the webinar, ACORE President Gregory Wetstone said his organization is continuing to ask Congress for an extension of federal tax credit deadlines and a temporary direct-payment scheme for project financiers.

In an annual state-of-the-industry report published alongside the jobs analysis, E2 further called on the federal government to undertake nationwide infrastructure programs, including from the construction of EV charger networks and building electrification and grid upgrades.

Initiating those programs, it wrote, would jump-start the economy and lay the groundwork for large reductions in greenhouse gas emissions.

Work could begin under those programs even "while some measure of social distancing still exists," said Jordan.

Pat Stanton, director of policy at E4TheFuture, stressed during the webinar that state officials also needed to ensure that utilities didn’t back off programs for energy efficiency and renewables. "It’s important … that the states stay the course," she said.

Bob Keefe, E2’s executive director, said the groups hadn’t done an estimate of what new stimulus programs would cost. But "the price tag for not doing something is going to be humongous," he said.

"This economic tailspin is so massive and so unlike anything we’ve ever seen before, we really need some bold ideas and visions from our lawmakers in Washington and beyond," added Keefe.

Nearly 3.4 million Americans were employed in clean energy sectors prior to the pandemic, accounting for 40% of the total energy workforce and outnumbering fossil fuel employees 3 to 1. Almost two-thirds worked for firms with fewer than 19 employees, said the report.

Most were centered in major cities. But in a handful of states — including several that are often electoral battlegrounds in races for the presidency — tens of thousands of rural residents made a living in clean energy industries. Those included North Carolina, Michigan, Wisconsin and Ohio.

"Every job in America counts, and clean energy workers aren’t looking for handouts," said Keefe of E2. "This isn’t about a Green New Deal from some West Coast liberals. This is about getting America … back on the job."