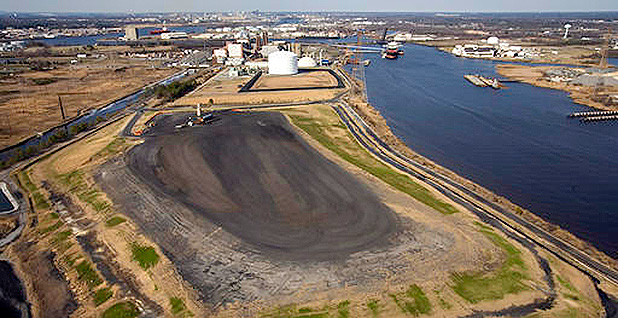 Coal ash waste sites at Dominion’s Chesapeake Energy Center, shown here in a 2008 file photo, are at the center of a legal battle over water contamination. Bill Tiernan/The Virginian-Pilot/Associated Press

An electric utility didn’t violate the Clean Water Act when arsenic linked to its Virginia power plant wound up in waterways, a federal court ruled today.

The 4th U.S. Circuit Court of Appeals reversed a lower court’s finding that Dominion Virginia Power was on the hook for leaks from coal ash dumps at Chesapeake Energy Center, which closed in 2014.

A three-judge panel found that Dominion’s coal ash landfill and settling ponds didn’t qualify as a "point source" under the Clean Water Act because the arsenic flowed from sites through groundwater before reaching the Elizabeth River and Deep Creek.

The decision adds to a growing body of case law on pollution via groundwater discharges. The issue could soon come before the Supreme Court if the justices agree to take up a recent appeal related to water contamination from the Hawaiian island of Maui.

The Clean Water Act provision addressing discharges defines them as the "addition of any pollutant to navigable waters from any point source." The 4th Circuit panel found that Dominion’s coal ash waste sites do not qualify as a point source because they do not match the law’s definition of a "discernible, confined and discrete conveyance."

"Here, the arsenic was found to have leached from static accumulations of coal ash on the initiative of rainwater or groundwater, thereby polluting the groundwater and ultimately navigable waters," wrote Judge Paul Niemeyer, a George H.W. Bush appointee. "In this context, the landfill and ponds were not created to convey anything and did not function in that manner; they certainly were not discrete conveyances, such as would be a pipe or channel, for example."

Circuit courts have taken divergent approaches to questions of groundwater discharges and point sources in recent years. The 9th U.S. Circuit Court of Appeals found earlier this year that Maui had violated the Clean Water Act when wastewater injected in underground wells reached the Pacific Ocean. The court held that the groundwater served as a conduit, moving pollutants to a body of water under federal jurisdiction.

Earlier decisions from the 5th Circuit and 7th Circuit rejected that approach. Noting the split among the appeals courts, Maui is asking the Supreme Court to review the 9th Circuit ruling (Greenwire, Aug. 28).

The 4th Circuit itself held earlier this year that pollution that moves into U.S. waters via groundwater can violate the Clean Water Act if plaintiffs show "a direct hydrological connection between ground water and navigable waters."

The panel distinguished today’s case by noting the diffuse way in which arsenic moved from Dominion’s landfill and ponds into groundwater.

"Thus, the landfill and settling ponds could not be characterized as discrete ‘points,’ nor did they function as conveyances," the court wrote. "Rather, they were, like the rest of the soil at the site, static recipients of the precipitation and groundwater that flowed through them. Accordingly, we conclude that the court erred in finding that the landfill and ponds were point sources as defined in the Clean Water Act."

Environmental groups have pushed the issue in a number of cases dealing with coal ash disposal (Greenwire, March 28). The Sierra Club, represented by the Southern Environmental Law Center, brought the case against Dominion.

"We are pleased with the court’s unanimous ruling that Dominion Energy did not violate the Clean Water Act or its state permits," Dominion spokesman Robert Richardson said in an email. "We will continue to work toward a permanent closing of the facility that ensures protection of the environment and is in the best interest of the community and our customers."

He called the Sierra Club’s lawsuit "an attempt to circumvent the regulatory program designed to address coal ash and groundwater impacts." The company will continue conducting groundwater and surface water monitoring previously ordered by a federal district court.

SELC called the ruling a disappointment, especially as Hurricane Florence moves toward the East Coast and threatens to cause damage to coal ash sites. But the group noted that the 4th Circuit did not question the lower court’s finding that the arsenic contamination was tied to Dominion’s facility.

"Today’s decision, while disappointing, does not affect the lower court’s factual determination that arsenic is leaking from coal ash pits at Dominion’s Chesapeake facility and flowing directly into the Southern Branch of the Elizabeth River; nor does the decision alter the lower court’s determination that simply capping the ash in place is not an acceptable solution to this problem," the group said in a statement.

SELC and the Sierra Club are weighing their next legal steps. They could ask the 4th Circuit to reconsider the decision or rehear the case before all active judges.

Nachy Kanfer, acting Eastern regional director for the Sierra Club, noted that the ruling has no bearing on other courts’ decisions finding that coal ash sites do trigger Clean Water Act jurisdiction. Two similar cases on that issue are moving forward in the 6th U.S. Circuit Court of Appeals.