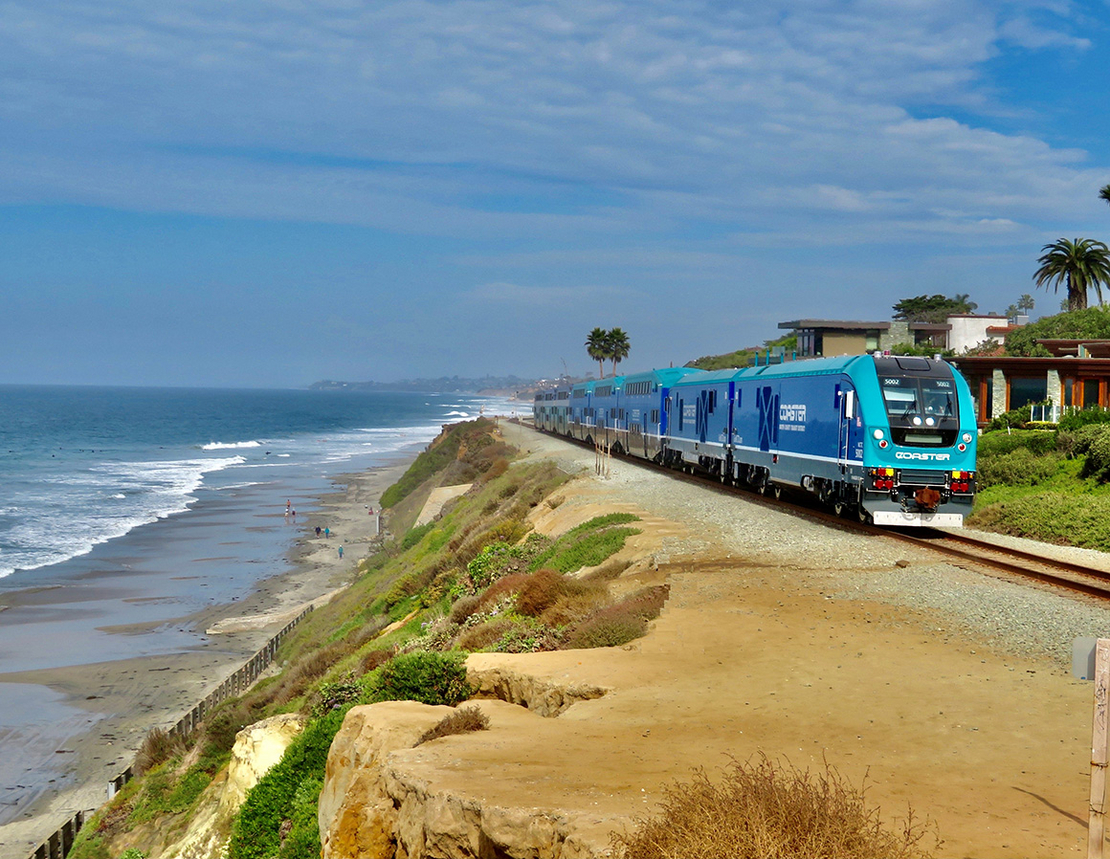 A commuter train travels along beach cliffs near Del Mar, Calif. Amtrak is outlining a plan to move the tracks because of climate change. SANDAG

DEL MAR, Calif. — More than 50 trains a day curve along the coast here, offering panoramic views of the Pacific Ocean as they race from one beach city to another. But climate change is putting their tracks in peril.

Beachfront bluffs in San Diego County are crumbling as waves from the rising ocean chew away at the base of cliffs. A regional planning group called the San Diego Association of Governments (SANDAG) is pushing to move the tracks to safer ground within a decade. That’s far faster than an earlier plan to do it by 2050 (Climatewire, Dec. 20, 2019).

“It will be totally ridiculous to try to fight nature. Nature would win at the end of the day,” Ikhrata said in an interview. “This track needs to be moved off the bluff. Yes, it’s going to cost a lot of money. But this is a critical corridor for people and goods movement, for national defense, for all kinds of reasons.”

Flooding from extreme storms and sea-level rise are hitting tracks in coastal areas, while thawing of permafrost affects rail in Alaska. Going forward, the problems are expected to accelerate with new threats, including that “rail tracks expand and weaken, sometimes even bend, under extreme heat.”

An analysison warming for the U.S. Department of Transportation recommended developing strategies to address warming’s implications for the railroad sector, as well as “planning under uncertainty to minimize the effects of future climate change.”

The California track imperiled by climate change carries the second-busiest Amtrak route in the country. The train linking San Diego, Orange County, Los Angeles, Santa Barbara and beyond transported 841,000 passengers last year, trailing only the Acela line that connects Boston with New York and Washington. A local commuter line, a freight company and the military also use the California tracks.

Climate change-fueled erosion on the coast is a problem beyond San Diego County. There are issues south of San Luis Obispo, where “future bluff stabilization and seawall repairs are recommended,” Robynn Tysver, a Union Pacific railroad spokesperson, said in an email.

As well, rising seas, extreme storms and shoreline erosion pose a threat to nearly all 7 miles of the coastal rail corridor in Orange County, north of San Diego County, according to a 2021 report by the Orange County Transportation Authority (OCTA).

Erosion caused the train tracks to move in San Clemente, near the San Diego County line. More than 12,000 tons of rock were placed on the coastal side of the tracks for “passenger safety and securing the tracks through the area,” Eric Carpenter, an OCTA spokesman, said in an email.

While that revetment appears to have stopped erosion beside the tracks, “erosion of the beach in front of the revetment may be increasing,” the agency’s report said. Isolated areas along the revetment “have several wide gaps which may expose the track and ballast to high wave attack and undermining.”

OCTA cites “additional fortification of barriers and, as a last resort, potential relocation of track would be considered,” Carpenter said.

That OCTA report said high heat also poses a threat to the train tracks. Hotter conditions are “projected to increase the stress on the rail itself, potentially leading to expansion and track buckling,” it said.

Relocating the tracks in San Diego County won’t be easy. It’s projected to cost several billion dollars. Local planning officials hope to get state and federal dollars and are asking for help from lawmakers. Once the source of the funding is identified, SANDAG will launch an environmental impact analysis.

In the meantime, it’s refining the right place to put the train tracks, narrowing down five options released earlier. It expects to unveil the top two publicly in coming months. Both, however, likely will involve digging tunnels 80 feet deep under the streets in Del Mar, a beach enclave where the average home costs $3.5 million.

“Will the city of Del Mar be OK digging 80 feet deep under the city? That’s obviously at the end of the day up to them,” he said. “If you want to do it in a decade, you’re going to have to be flexible in how you do it.”

Terry Gaasterland, a Del Mar councilmember and former mayor, said that moving the train appears to be the best option.

The council will need to address residents’ concerns about whether the tunnels will cause vibrations in their homes, or air pollution and emissions, she said. Train authorities plan to switch to electric trains, so the last one won’t be an issue, she said.

City leaders want the tracks moved because it would sidestep a different kind of climate adaptation: the construction of seawalls.

Adding more defensive structures, as SANDAG has proposed, would “fundamentally change everything along the Del Mar beach,” Gaasterland said in an interview. “The Del Mar beach experience will be 10-foot-high seawalls instead of natural bluffs.

“We will lose the sand,” she added.

SANDAG said the walls would stand 7 feet tall and extend less than a half-mile.

There’s also a potential fight over who controls the tracks. North County Transit District (NCTD), which runs the trains locally, wants to install chain-link fencing along segments of the tracks for safety reasons. People walk along the tracks to get to the beach and have been injured and killed.

NCTD has asked for federal help in blocking local oversight of the train, a move that could thwart plans to move the rail line. NCTD wants the national Surface Transportation Board (STB) to declare safety fencing a federal issue.

NCTD in its letter mentions the potential track relocation.

“The requested actions by Del Mar would impose sweeping mitigation requirements on NCTD and the eventual relocation of the existing railroad line and potentially the construction of a multi-billion dollar underground tunnel,” it said.

The agency asked STB for “a declaratory order now because it has numerous crucial, upcoming rail maintenance and upgrading projects that will be challenged” by Del Mar or the California Coastal Commission, which oversees development on beaches.

Meanwhile, Del Mar residents have spoken at every recent meeting of the Coastal Commission to urge the agency to oppose SANDAG’s plan to build seawalls.

The agency’s top executive recently sent a letter to SANDAG expressing concerns about the walls. SANDAG has said it would remove its walls after the train tracks are relocated. But the Coastal Commission noted that moving the tracks in a decade appears optimistic.

“Under the accelerated timeline for relocating the tracks off of the bluffs by 2035, the soonest” that seawalls could be removed and access to the beach restored “would be upwards of fifteen years,” the letter said, “and more likely closer to thirty years if the rail corridor is not relocated until 2050.”

SANDAG said the group is “committed to moving the tracks off of the bluffs as soon as we can. There is unprecedented support among our regional, state, and federal partners to get this done. As soon as funding becomes available, we are prepared to move forward on an aggressive implementation schedule to move the tracks in the next 10 years.”