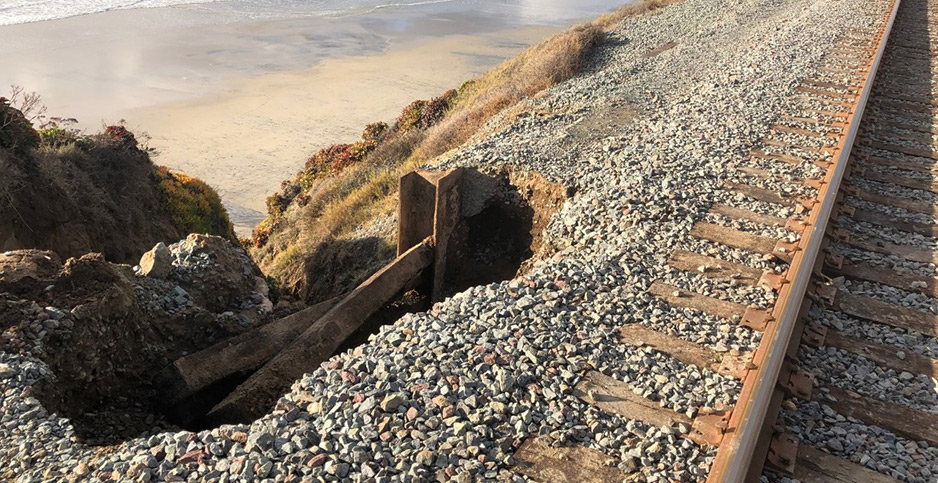 A partial cliff collapse in Del Mar, Calif., has heightened calls to relocate a railroad in the area. Gary Robbins/TNS/Newscom

An oceanside cliff in Southern California traversed by more than 50 trains a day is considered so precarious that a safety official watches it 24 hours a day.

The monitor scans for problems in Del Mar, in north San Diego County, near where a section of bluff washed away during heavy Thanksgiving rains. Only about a foot of land remained in front of the tracks.

The Thanksgiving collapse marked the latest problem for a throughway used regularly by Amtrak, a local commuter line and a freight company.

The San Diego Association of Governments (SANDAG), a regional planning group, knew as early as 2000 that it needed to move rail tracks off the cliffs. But with costs expected to run into the "billions of dollars," it instead opted to add vertical steel beams inside the bluffs. A plan to reroute the tracks has been pushed back to as late as 2050.

Now the cliffs are seeing a spate of failures. Six major collapses have occurred since summer 2018.

"In 2000, nobody thought we’d be sitting here 20 years later with the bluff top 2 feet from the rails. That’s been a surprise," said Dwight Worden, a Del Mar city councilman. He added: "I think everyone has come to the realization, wow, we’ve got to do this a lot sooner than we thought. We can’t be waiting until 2050 to deal with this. This year has been dramatic in terms of the number of sloughs and bluff collapses and proximity to the rails."

SANDAG said it knows the tracks need to be moved. In the meantime, it’s trying to make sure train travel is safe.

"Both stabilizing the bluffs and moving the railroad tracks have been considered necessary to keep the railroad operating," the agency said in an email. "However, due to limited available funds and the extended timeline of track realignment, it is critical that SANDAG" and track manager North County Transit District (NCTD) "reinforce the Del Mar bluffs while concurrently studying track realignment."

The cliffs in Del Mar are part of a larger picture of eroding oceanfront bluffs in California, the nation’s most populous state. In early August, a 30-foot-long slab of cliff crashed to the sand in Encinitas, 6 miles north of Del Mar. It killed three women. About two weeks later, a chunk of cliff crumbled in Solana Beach, between Del Mar and Encinitas.

In Sonoma, near San Francisco, cliffside homes along Highway 1 have fallen into the sea. In Pacifica, a San Francisco suburb, apartment buildings were condemned and demolished after a coastal hillside became unstable. In San Luis Obispo, north of Santa Barbara, 3 miles of Highway 1 were moved inland.

The need to move the railroad tracks and the lack of funding to do it is the kind of problem that will be seen all over the country with climate change, experts said.

"This is exactly the kind of adaptation problem we’re likely to face more of in the future," said Michael Wara, director of the Climate and Energy Policy Program at the Woods Institute for the Environment at Stanford University. "It’s going to be infrastructure that’s the problem, things like rail lines, power lines, roads. The cost of moving infrastructure is just massive, especially in built-up areas."

A study earlier this year from the University of Colorado, Boulder; EPA’s Climate Change Division; and others said climate change poses a threat to the rail network nationally. It explained that "at extreme heat conditions, the continuously welded rail tracks that make up the modern rail system will buckle due to expanding metal."

The rail infrastructure was put on the Del Mar cliffs under the assumption the coastline is stable, Wara said, but it’s not.

While the Thanksgiving cliff collapse in Del Mar was storm-related, sea-level rise plays a role, said Adam Young, project scientist at the Scripps Institution of Oceanography at the University of California, San Diego. During winter at high tide, there’s scant dry sand left below the cliffs, and waves crash at their base every day.

"You have the waves eroding the bottom of the cliff causing cliff instability," Young said, and then rainfall or groundwater runoff from nearby homes "tend to trigger landslides in the unstable cliffs." He added, "I expect there will be more land sliding this winter as we have heavy rains and big waves."

There have been about 100 minor cliff collapses since 2018 in addition to the major ones, he said.

The stretch of train tracks through Del Mar is unique in that it’s the only part of the San Diego-to-Los Angeles segment on the cliffs. In other places such as San Clemente in Orange County, the tracks are below the cliffs.

Amtrak uses the tracks for its San Diego-to-San Luis Obispo route. Burlington North Santa Fe LLC runs three nightly trains carrying new automobiles brought in from Asia to the Port of San Diego. Those go east to San Bernardino, where they are offloaded and moved all over the country.

Amtrak eventually wants to have a train running between San Diego and Los Angeles hourly. Over the long term, additional freight service is planned to meet future demands from the port and other customers, said SANDAG. NCTD plans to add more local commuter service to downtown San Diego on the tracks starting in 2023.

The plans, if completed, would double to more than 100 the number of daily train trips through the area by 2035, said SANDAG. That’s well before the plan to reroute the tracks.

Options for rerouting the train include digging tunnels through Del Mar, under a local canyon or alongside the I-5 Freeway. There’s also an alternative of moving it a few miles east of the freeway, but that would increase travel time, according to a presentation by SANDAG to the Del Mar City Council earlier this year.

In a 2017 study, rerouting options were projected to cost $2.5 billion to $3.5 billion. John Haggerty, SANDAG’s director of engineering and construction, said that it’s "premature to put a price on it right now. We don’t understand enough about what it is or where it’s going."

SANDAG plans to look at options for moving the tracks again next year as part of a larger regional planning effort, Haggerty said. That would examine moving the segment of rail in Del Mar, and analyzing the realignment of tracks through other parts of San Diego to allow more frequent trains and faster rail speeds in the future.

"Part of that [study] is going to look at transit and transportation solutions in the entire region. And then we need to prioritize those and find the funding," Haggerty said. Moving the tracks "isn’t going to be something that’s going to happen right away. So what we need to do is ensure that the current operation we have will be able to sustain itself until we come to that ultimate solution."

SANDAG said it didn’t pursue funding to move the tracks sooner because it needed to address regional concerns. There was a need to upgrade the rail from single to double track because of projections of increased use. Meanwhile, early estimates said "it would take about 20 years before a potential tunnel could be built in this area," the group said in an email.

"Due to limited available funds and the extended timeline of completing a project of this magnitude, SANDAG and NCTD prioritized stabilizing the bluffs while concurrently studying track realignment to place the agencies in a better position should funding become available," the agency said.

For the last 20 years, SANDAG has rolled out multiple projects to stabilize the cliffs. Those include installing inside the bluffs more than 200 "soldier piles" — vertical steel beams surrounded by concrete.

Those protect against a catastrophic collapse, Haggerty said.

"It’s a series of columns that we’ve placed in behind the face of the bluff to the point where if the bluff retreated to that point, it would actually stop retreating because we put the wall in," Haggerty said.

However, Worden, the Del Mar city councilman, noted the soldier piles are visible in some spots because "the top of the bluff has eroded so close to the actual rails."

Plans by SANDAG include studies to find options for stopping erosion at the base of the cliffs, where waves are hitting. If there’s a bid to erect sea walls, that could mean clashing with the powerful California Coastal Commission, which generally opposes armoring.

Haggerty said SANDAG would likely study alternatives and present those to the state agency.

"What we know today is at some point we’re going to have to do more stabilization" at the base of the cliff, Haggerty said. "Some of the recent retreats are making it certainly a higher priority to get work on" that project started.