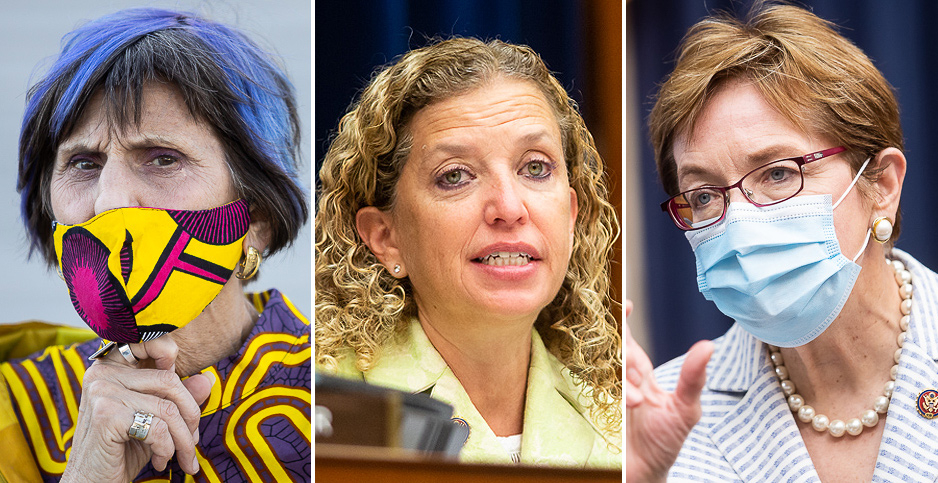 Democratic candidates running for the House’s most powerful spending post are vowing to work closely with the new Biden administration to prioritize federal dollars for fighting climate change.

Veteran appropriator Rosa DeLauro, the front-runner to get the Appropriations Committee gavel next year, has a long record on green issues — as do the other two contenders, Reps. Debbie Wasserman Schultz of Florida and Marcy Kaptur of Ohio.

Each is touting their work on climate and energy issues to win support across the caucus, in which environmental concerns are expected to be a top legislative priority in the new Congress.

House Democrats will select a replacement next week for current Appropriations Chairwoman Nita Lowey (D-N.Y.), who is retiring after 16 terms in Congress.

The House Democratic Steering and Policy Committee is expected to hear closed-door presentations from each candidate early this week and then make its recommendation to the full caucus, which would soon ratify the choice.

The winner will oversee the writing of the 12 annual spending bills, including those funding EPA and the Energy and Interior departments.

President-elect Joe Biden has proposed trillions of dollars for climate, infrastructure and pandemic efforts, and the House Appropriations Committee chairwoman will likely be at the vanguard in fighting for that money, especially if the Senate remains in GOP hands.

"All three would do well carrying on Chairwoman Lowey’s pro-environment funding legacy," said Matthew Davis, legislative director for the League of Conservation Voters, which is remaining neutral in the race.

DeLauro, 77, has been a leading liberal voice in the caucus for decades and is especially close to Speaker Nancy Pelosi (D-Calif.), who is not endorsing in the race but holds sway over the Steering panel.

The Connecticut Democrat herself has spent 18 years on the Steering panel building relationships with other senior Democrats — something that should give her an edge, House aides said.

DeLauro is the only Appropriations hopeful who is a sponsor of the Green New Deal, the progressive plan to achieve net-zero carbon emissions by 2030.

"The next Appropriations Committee Chair will need to work closely with the Biden-Harris administration to repair the damage done by climate-deniers throughout the Trump Administration," DeLauro said a statement to E&E News.

She added that priorities would include "investing in green jobs and green technology while protecting workers and ensuring environmental justice for minority people and vulnerable communities."

DeLauro is known for her work on conservation programs tied to the Long Island Sound, whose shoreline covers a swath of her district.

She has helped lead the Congressional Long Island Sound Caucus since 2012 and recently helped get a record $30.4 million in EPA funding for the sound’s conservation efforts.

DeLauro, a skeptic of most free trade deals, has argued the international pacts need to contain environmental protections.

In recent weeks, DeLauro has won backing from several labor groups including the AFL-CIO, which recently outlined a framework for "good jobs in a low carbon future."

If DeLauro falters, Wasserman Schultz, 54, the most junior Appropriations member in the race and a former chair of the Democratic National Committee, is seen as the most likely alternative.

A long-shot candidate when she entered the race, congressional aides say Wasserman Schultz has gained some support from progressives and the Congressional Black and Hispanic caucuses by emphasizing climate change and racial equity.

She is also seen as having solid support among the moderate Blue Dog Coalition and the New Democratic Coalition, where she has long been active, aides said. The latter group has more than 100 members.

"We’ll have a strong ally in the White House and a climate quarterback now in John Kerry, I just see huge potential for House Democrats, especially the next appropriations chair, to confront climate change like no other Congress before us has been able to," Wasserman Schultz told E&E News.

Wasserman Schultz has made climate the centerpiece of her campaign, circulating a letter to House Democrats last week saying she would use the full power of the panel to "double down" on fighting it. Her South Florida district covers part of the low-lying, greater Miami and the Atlantic coast.

According to the plan, Wasserman Schultz would boost climate spending in each of the 12 spending bills, ranging from hiring more EPA staff to investing in green infrastructure.

She would also use the bills to push pro-green policies, including blocking drilling in the Arctic National Wildlife Refuge and denying offshore energy exploration.

Additionally, the Florida lawmaker says she would prioritize environmental justice via under an advisory panel to the Appropriations Committee to examine equity and justice issues in federal spending.

Kaptur, 74, chair of the House Energy and Water Appropriations Subcommittee, is the most senior appropriator in the race and the longest-serving female in House history.

She previously lost a race for the gavel to Lowey amid concerns she had a conservative streak and was not a strong party fundraiser.

But the Ohio Democrat has stepped up fundraising in recent years and likes to tout the fiscal 2021 Energy-Water measure as the "most climate friendly bill" passed by the House this year.

It contains billions of dollars in new investments in Department of Energy clean energy projects as well as Army Corps of Engineers water infrastructure projects.

"I have a long commitment to the environment as someone who comes from the Great Lakes region," Kaptur told E&E New recently. "I am a city and regional land planner by training. I have a very good sense of the earth science involved here and what we need to do to protect Earth’s treasures for a generation to come."

Kaptur sees a connection between fighting climate change and the economic recovery. She said helping municipalities make sewer and water upgrades, for example, would not only lessen financial pressures but also benefit the environment with better-designed systems.

Kaptur said she would like to keep her subcommittee gavel regardless of whether she takes over the full panel, seeing it as a chance to have a major impact on climate spending.

"In many of his speeches, Biden has linked energy, clean energy, climate change to economic growth. That lands right in our subcommittee. So we look forward to using the instruments we have to help him effectuate the change that we know America must sustain in order to provide for the sustainment of life on Earth as well as economic recovery," Kaptur said.