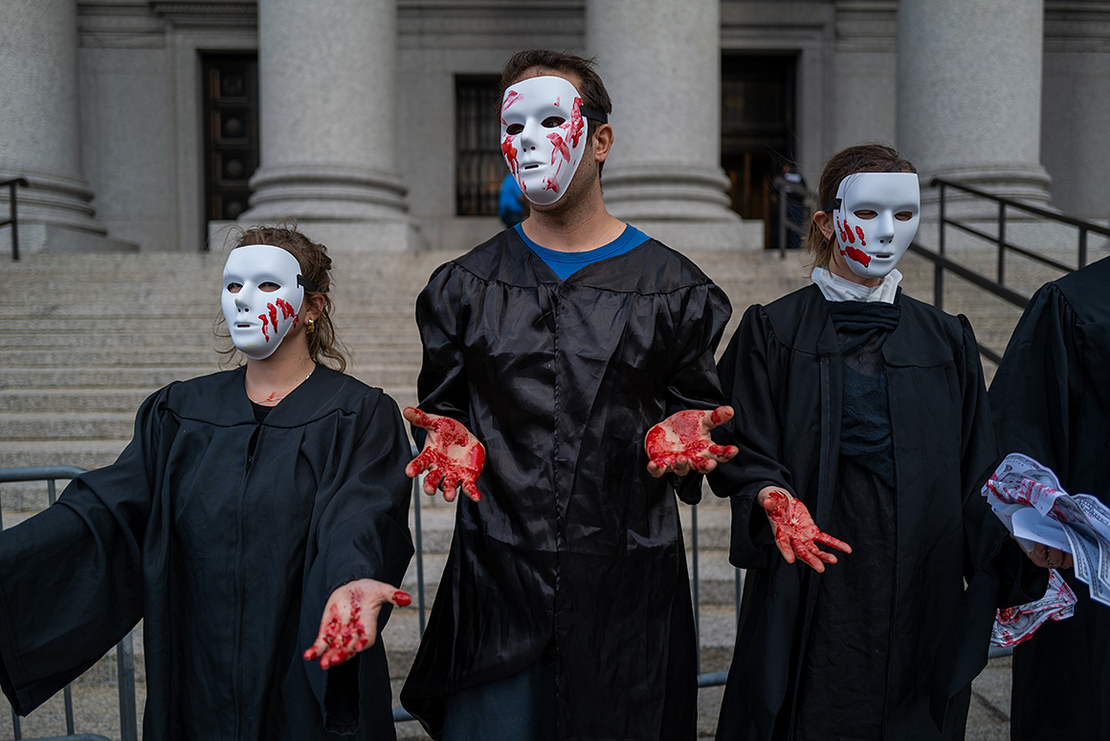 Climate activists, including members of Extinction Rebellion, participate in a demonstration in front of the Thurgood Marshall United States Courthouse against a recent Supreme Court ruling on June 30 in New York City. Spencer Platt/Getty Images

Jennifer Falcon, a climate and Indigenous rights organizer in San Antonio, Texas, worries constantly about the impacts of climate change on her community, such as water restrictions and a possible collapse of the electric grid.

She thinks Democrats “wasted two years” trying to convince Democratic Sen. Joe Manchin of West Virginia to go along with their plans to tackle climate change. The negotiations collapsed, and she’s tired of waiting.

“That’s gotten us nowhere,” Falcon said this week in an interview. “We need to meet this moment with the urgency that it deserves.”

Falcon is working with a coalition of climate activists hoping to disrupt Congress’ annual baseball game in Washington tomorrow night. If politicians have “failed to deliver on climate change” prior to the game, “we will shut it down,” protest organizers wrote on their website titled “Now or Never.”

Tomorrow’s planned demonstration at the baseball game will be one of many climate protests aimed at people who are typically their political allies in recent weeks as organizers have grown increasingly frustrated with Democrats’ failure to come through on their promises for climate legislation.

This summer has been a bad one for climate hawks — the U.S. Supreme Court limited the administration’s ability to regulate greenhouse gases as Manchin refused to give Democrats the slim majority they needed for clean energy legislation.

Climate organizers — embittered by the recent events and worried that Democrats will lose control of one or both chambers of Congress next year — plan to continue protests until lawmakers come through with policies needed to meaningfully curb emissions.

Some are willing to get arrested, anger Democrats and make people squirm in order to get their attention.

On July 4, climate protesters sat down on the Beltway, blocking traffic outside of Washington. Climate organizers protested outside of White House chief of staff Ron Klain’s home and separately at President Joe Biden’s beach home in Delaware this past weekend. House staffers were detained by Capitol Police on Monday for protesting to demand climate action in Senate Majority Leader Chuck Schumer’s (D-N.Y.) office.

Climate activists have been getting attention abroad, too. In Italy last week, environmental activists glued their hands to Sandro Botticelli’s famous painting “Primavera” in a gallery in Florence.

Critics including Democrats and Republicans alike have questioned activists’ tactics as protests have intensified.

House Minority Whip Steve Scalise (R-La.), who was critically wounded in a politically motivated shooting at a 2017 practice ahead of that year’s congressional baseball game, called it “absolutely shameful that radical leftists would target a unifying charity event to disrupt as a way of promoting their extreme agenda that is raising costs on hard-working families across the country.”

Organizers of the protest at the baseball game are expecting hundreds of demonstrators at the event. They declined to share their specific plans for disrupting the game, but they said it will be disciplined and nonviolent.

“The real violence being committed at this baseball game is by Congress, by Manchin, by his Republican allies and by everybody in Congress who’s failing to take action on climate change, therefore consigning millions of people to die and millions more livelihoods to be destroyed,” said Dan Sherrell, an organizer for the protest at the baseball game.

Tomorrow’s protest will be an “act of civil disobedience in the same tradition as the lunch counter sit-ins from the Civil Rights Era,” Sherrell said.

Demonstrators got blowback on Twitter over the weekend when they traveled from New York with their kids to protest outside of Klain’s house in Chevy Chase, Md. They dressed their children up as firefighters and urged the Biden administration to declare a national climate emergency.

“A really good thing progressive funders could do is to stop plowing money into organizations whose main function is to generate bad press for Democrats and help Republicans win elections,” journalist Matthew Yglesias wrote on Twitter following the protest outside of Klain’s house.

The climate group wrote on Twitter that they had backed Biden in 2020 because of his climate promises and saw it as their job to hold Biden and Klain accountable.

“To think that people shouldn’t hold their elected officials accountable to keep their own campaign promises — to me, that’s a radical position,” said Liat Olenick, an organizer with Climate Families NYC who protested outside of Klain’s house last weekend, in an interview.

She and other organizers “don’t want to travel to D.C. and go to the White House chief of staff’s house on a 95-degree Saturday,” she said. “We’re doing it because we feel we have to for our families’ survival and for the survival of our communities.”

Those who criticize protesters’ tactics “are trying to distract from the issue at hand,” said David Sirota, co-writer of the Netflix film “Don’t Look Up” and a former aide to Sen. Bernie Sanders (I-Vt.) (Climatewire, Jan. 11). “I think they don’t want a climate movement that actually makes people in power uncomfortable.”

Using tactics like blocking traffic will get attention, but might ultimately hurt activists’ cause, said a Democratic congressional staffer who was granted anonymity to speak candidly about political tactics.

It won’t help activists’ political agenda to “grossly inconvenience average people,” the staffer said. “Don’t put them in a traffic jam, which by the way increases emissions.”

Paul Bledsoe, a former climate aide in the Clinton White House who’s now at the Progressive Policy Institute, urged activists to put their time and energy into ousting Republicans and electing big Democratic majorities in Congress so they can pass climate legislation.

“It’s just not an effective strategy,” he said of the recent protests. “Why Klain or Biden or Schumer are the target, that does seem completely misguided,” he said. “These are the people who have been pushing a climate agenda.”

Vincent Vertuccio, who’s also organizing the protest at the baseball game, said it’s time for a new approach on climate.

“The D.C. way of doing things — we’ve been doing that for quite a while,” said Vertuccio, a 19-year-old political science student at George Washington University.

“We’re in this really narrow window to take climate action on the scale that we need,” he said, adding that Democrats may not have a “trifecta” controlling the White House and both chambers of Congress “probably for another decade, and we just cannot afford to squander this opportunity.”

Political insiders in Washington don’t “understand the angst that is happening in this country, especially with the younger generations,” said RL Miller, president and co-founder of the group Climate Hawks Vote, which is co-sponsoring the protest at the baseball game.

“Nobody under the age of 30, 35 doubts that climate change is coming for them, and they’re all just ready to scream in frustration,” she said. “I do think that these protests are sane responses to an insane situation.”