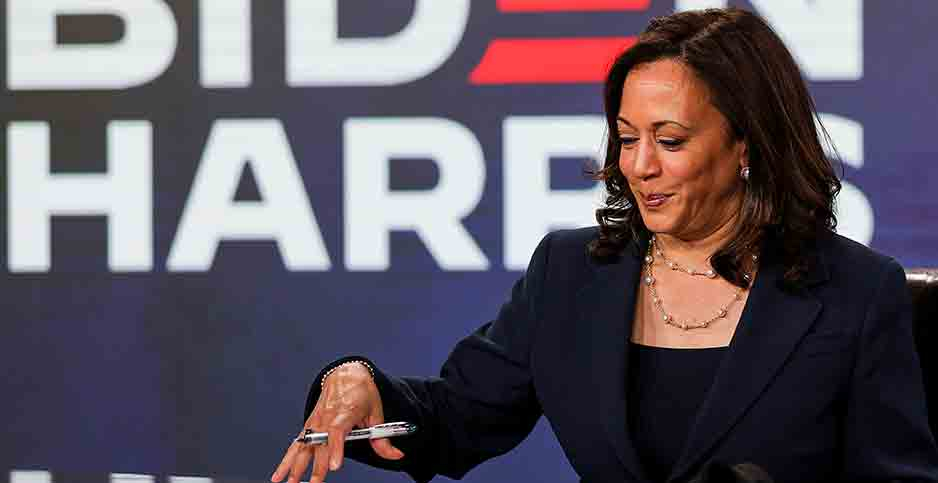 Sen. Kamala Harris (D-Calif.) signing documents last week to accept the Democratic nomination for vice president. She is scheduled to speak tonight during the third day of the party's convention. Carlos Barria/Reuters/Newscom

The Democratic National Committee will feature young climate activists and a union worker, among others, during a presentation about climate change during the third night of the party’s national convention.

The presentation comes amid some signs of friction between the Democratic Party and progressive activists.

Progressives yesterday accused the party of removing from the party platform a provision calling for an end to fossil fuel subsidies (E&E Daily, Aug. 19).

"[email protected] continues to be committed to ending U.S. fossil fuel subsidies & then rallying the rest of the world to do the same — as was outlined in his climate plan last year," she wrote on Twitter.

"Here at home," said Feldman, "he’ll use those dollars to instead invest in a clean energy future and create union jobs."

RL Miller, a progressive climate activist who was elected to the DNC earlier this year, responded to Feldman on Twitter, saying Biden was doing the right thing but not the party.

Lujan Grisham was considered one of the contenders to be Biden’s running mate. Since assuming office in 2019 following a Republican administration, she has taken a series of steps to push clean energy in New Mexico, like signing the state on to the U.S. Climate Alliance and signing legislation to transition the state to zero-carbon electricity.

She has stated the oil and natural gas production revenue is key to the state’s budget, something the American Petroleum Institute has used to push Democrats against anti-oil and gas policies.

IBEW backed Biden in February, shortly after the primary season began. It specifically cited his "all of the above" energy plan in its decision to support him despite the threat his presidency would pose to fossil fuels, likely affecting energy jobs.

Singer Billie Eilish will wrap up the climate segment with a performance. The night’s top draw will be Sen. Kamala Harris (D-Calif.), who will accept the party’s vice presidential nomination.