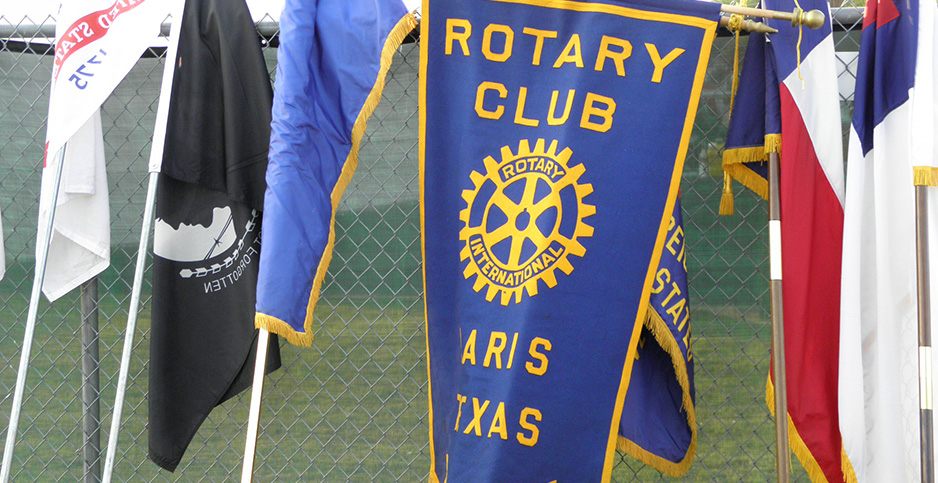 A Rotary Club flag hanging against a fence at the 2011 Fourth of July parade in Paris, Texas. Amy Claxton/Flickr

Over the course of its 114-year history, Rotary International has racked up its fair share of karma points.

The service club was instrumental in the decadeslong effort to all but eradicate polio from the world, and the group’s 1.2 million members have launched a sweeping range of projects in recent years, such as helping Puerto Rico rebuild after Hurricane Maria.

But one place Rotary hasn’t taken a stand is in the area of climate change.

While much of the group’s work is affected by global warming — including disaster recovery and poverty assistance — past efforts to confront climate change have been stymied by the organization’s tradition of leaving politics at the door, said current and former Rotarians.

Which is why the April edition of the club’s own magazine is so remarkable.

The publication devoted its cover and several articles to global warming — notably a Q&A with Rotary International President Barry Rassin. In it, Rassin declared the group had a moral obligation to talk more about climate change.

"With polio, people say, ‘OK, that’s just health care.’ But when you start talking about the environment, people ask if it’s political," Rassin told the magazine, called The Rotarian. "I’m not talking politics; I’m talking about our world and how to make it a better place."

The shift in tone hasn’t gone unheralded — both inside and outside the organization.

"It helps to break through the noise when a nontraditional actor decides to step up," said James Dozier, board president at Citizens for Responsible Energy Solutions, a group that pushes Republican lawmakers to embrace greener sources of power.

But amid the polite applause from climate activists, there still looms the question of whether Rotary’s new approach will lead to anything meaningful, especially in the time scientists say is left to help humanity avoid the worst effects of a warming planet.

David Forward knows more about Rotary than most.

Not only has he been a member of the group since 1978, but he chronicled its history in a book called "A Century of Service: The Story of Rotary International."

In a phone interview, he attributed the recent shift on climate change to the organization’s international complexion.

"So many of the other counties in this world realize it’s real, and it’s a threat, and it didn’t start this morning," Forward said. "And they have exerted a lot of influence over the years."

Rotary says it has members in more than 200 countries, and its board of directors hails from across the globe.

That includes Rassin, the current president, who calls the Bahamas his home.

"I look at my own country — climate change is almost personal," Rassin said in the Q&A. Because of rising sea levels, "my country is going to be gone if we do nothing."

Even so, Rotary still has deep roots in the United States, including its headquarters in Evanston, Ill. That influence has made it more difficult to talk about climate change — especially with so many members hailing from the business community.

"Rotary International is, in general, a fairly cautious and conservative group, and it tends to try and avoid things that are political — lest they divide their diverse membership," said Alan Anderson of Northfield, Minn.

A retired executive of Boy Scouts of America, Anderson now is part of a local effort to promote climate activism within Rotary International.

It’s why he said winning over groups such as Rotary is so important.

"If we’re going to get anywhere on the big and needed solutions on climate, we need business leaders to support things like a carbon fee and dividend," said Anderson, who has been a Rotary member for nearly 20 years.

Plus, he said Rotary International has a "really large war chest for funding grant proposals," and if climate change is elevated to a top concern, then it "would make a lot of funding available."

That’s far from a foregone conclusion, however.

In his chat with The Rotarian magazine, Rassin referenced the internal ideological struggle.

"I’ve had one very negative letter telling me that I was doing a great job until I mentioned climate change," he said.

Later he added: "I think this is Rotary’s moment to start the conversation. I don’t think we’re going to get much further than that at this point in time."

E&E News tried for three weeks to arrange an interview with Rassin but was told he didn’t have time available.

One factor in Rotary’s transformation is the behind-the-scenes work of Citizens’ Climate Lobby, a bipartisan advocacy group.

The two organizations have a lot in common.

That doesn’t mean there hasn’t been controversy or criticism.

A chief complaint about the Climate Solutions Caucus is that — at best — it’s ineffective. And at worst it gives cover to lawmakers who don’t care much about climate but want a green check mark to tout on the campaign trail.

The caucus has been in limbo since its top Republican — former Florida Rep. Carlos Curbelo (R-Fla.) — lost his reelection bid last year. But the top Democrat, Florida Rep. Ted Deutch, is pushing ahead with legislation that has the full backing of Citizens’ Climate Lobby.

The measure would put a tax on carbon emissions that would start at $15 per metric ton and increase by $10 annually. In doing so — the thinking goes — companies would have a financial incentive to reduce their carbon footprint and, in turn, slow the rate of global warming.

Money collected from the carbon tax would be returned to taxpayers.

The general idea of carbon taxes has gained some traction in conservative circles, though many liberal activists — especially those who support the Green New Deal — have been noncommittal about it.

One thing that’s certain, however, is that the concept has gotten less media attention these last few months than the Green New Deal, a broad plan to fight climate change with a government-led jobs program.

But activists with Citizens’ Climate Lobby see Rotary as a place to win converts — and shift the debate.

Steve Valk, a spokesman for Citizens’ Climate Lobby, said Rotary’s greater visibility on the issue of climate change — through actions such as its magazine cover story — are especially important in convincing Republicans that climate action is necessary.

"If Rotary says, ‘Hey, we need to do something about climate change,’ that sends the signal to Republicans that it’s OK for them to step up," Valk said. "It really furthers the whole bipartisan effort."

Maybe the most important link, however, is through Marshall Saunders — a onetime Rotary member who founded Citizens’ Climate Lobby and serves as its president.

"As a humanitarian organization, Rotary has an obligation to talk about climate change," Saunders said.

But he said it’s often been a tough hill to climb. For example, Saunders said he would be invited to talk to a Rotary Club by "two or three members who might be 34 [or] 35 years old," but when he would get there the overall reception would be less than enthusiastic.

"There might be a table in the back where the guys were old white guys — might have founded the club [and] done a lot of good in their years — but would just as soon not be there," he said. "And that happened more than once or twice."

Which is why Saunders said Rotary’s work can’t just stop with a newsletter cover.

"What has to happen is that the Rotarians who care about it — and I wish there were a lot more — they are going to have to get on the telephone and ask for speaking engagements" with activists such as those at Citizens’ Climate Lobby, Saunders said.

Without it, he said, "the conversation … is going to die on its own."