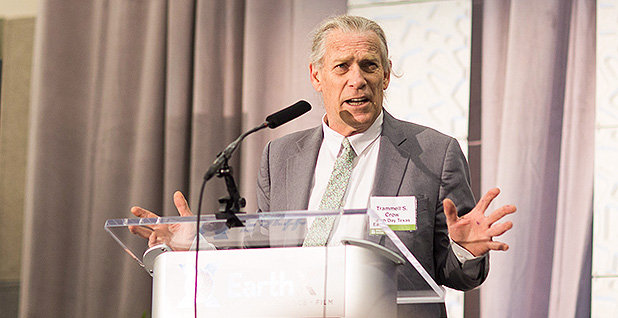 Environmentalist and philanthropist Trammell S. Crow speaks at the EarthX event in Dallas, the word's largest environmental expo that occurs over a three-day period in April. Shay and Olive Photography/Special to E&E News

Trammell S. Crow may be one of the most influential environmental and energy players you’ve never heard about.

The 66-year-old Republican philanthropist and son of a Texas billionaire real estate mogul has been quietly feeding information and contacts to key members of President Trump’s environment and energy team.

"I have seen some of the people we’re talking about here, willing to listen and talk in a different way than they can in D.C.," Crow said in a husky Southern drawl during a recent phone interview from his home in Dallas. His property also serves as a bird sanctuary.

"I think we created a green cover," he said.

Crow credits EarthX — which he launched seven years ago — with marrying the green movement and business.

The Dallas native and his five siblings grew up watching their father, Fred, create a real estate empire.

After graduating from Yale University, Crow worked his way up from a warehouse leasing agent in Denver to president of the Crow Family Foundation Inc., which operates and manages the Trammell and Margaret Crow Collection of Asian Art. He’s now backing or sitting on the board of several environmental organizations and is co-founder of the Texas Business for Clean Air and Texans for Clean Water.

While Crow donated to Trump’s presidential campaign, he’s unhappy with the administration’s environmental record and believes Pruitt is "going in the wrong direction." And while he continues to support the Republican Party, he maintains that many Republicans are "armchair environmentalists."

Crow recently talked with E&E News about an uptick in "green Republicans," how the GOP is handling climate science, and growing up in the Lone Star State.

What’s it like to be a Republican environmentalist these days?

Trump’s election has woken up a lot of people. There’s an amorphous group I call "green Republicans." Now, here in Dallas, that’s another thing. It’s pretty lonely here. But EarthX was bigger than last year, despite the rain.

What do you think of Republicans’ handling of climate change?

At the event we just had, Ohio Republican Gov. John Kasich was on stage and said he believed in climate change. I can’t say very well what Republicans are doing except denial.

It’s cognitive dissonance, and that’s based on fear. We cannot accept this overwhelming global threat. It’s hard enough for Democrats. We talk a good talk, but most of us are armchair environmentalists; we don’t incorporate it into our lives very well, and Republicans are lagging far behind.

I don’t think a carbon tax is very politically viable, but I think the fee and dividends, and these other systems, those are really viable alternatives.

Do you see the GOP’s embrace of climate science shifting?

I think it has to change. I think it will. I don’t know if it’ll change fast enough, but it is changing. And with young people. We have a wonderful conference called the Bridge Conference — it was a two-day event — and we had near 70 universities in and out of the room; there are many Republican college students there — to them, a Republican Party without climate action is a non-starter.

Have your views gotten you in trouble in Texas?

(Laughs) I have a few friends. I don’t respond to their taunting texts anymore. But let me say, state reps, state senators, congressmen, [Republican Texas Rep.] Pete Sessions came unexpectedly to the event this time … it does rub off on them. It’s just how much you can’t say.

When Pruitt came, he spoke, but he listened and he sat with a small group of environmental leaders. It was a pretty … interesting conversation. But after that, he had his office call me and ask if I could help him contact public utility commissioners from around the country because he wanted to meet two or three of them a month.

Pruitt has been monthly group calls with, I think, between five to 10 commissioners who probably are mainly Republicans. I haven’t been on a call in the past two or three months, but this calendar year, it’s still ongoing. That’s great.

Both Perry and Pruitt came last year, and both of them had their offices call me back. Perry had asked for meetings with environmental group leaders, and Pruitt had asked for PUC commissioners.

Did you support Trump for president?

I know I wrote a check to his campaign, and I know to get in to meet Hillary [at] a party, I wrote her a check, too (laughs). Am I happy with what Trump’s doing? The answer is no. Am I happy with supporting him and Hillary? As a matter of fact, I’m not pleased with either party, but making political contributions is a pragmatic thing for me.

What’s been the reaction to Pruitt scandals?

I would guess most fossil fuel Republicans here in town have not spoken out unfavorably about Pruitt. Me, it’s not my role as the P.T. Barnum and show promoter to take the political stance, but I certainly think Pruitt is going in the wrong direction in general with respect to the environment.

Have you ever thought about running for office?

I grew up in Dallas; it was a big city. I’m a suburban kid. Life was good. You didn’t have to be a genius; all you had to do was work hard after World War II in the middle of the United States of America. I had an easy life — my father was born on a dirt road. My father wasn’t a billionaire when I was born. The company grew as the children grew, and so we didn’t have silver spoons in our mouths.

When did you go green?

I don’t have some interesting story of being with nature. My father as a developer told us kids we were stewards of the land and we didn’t really own the land. We are only tenants on this planet.