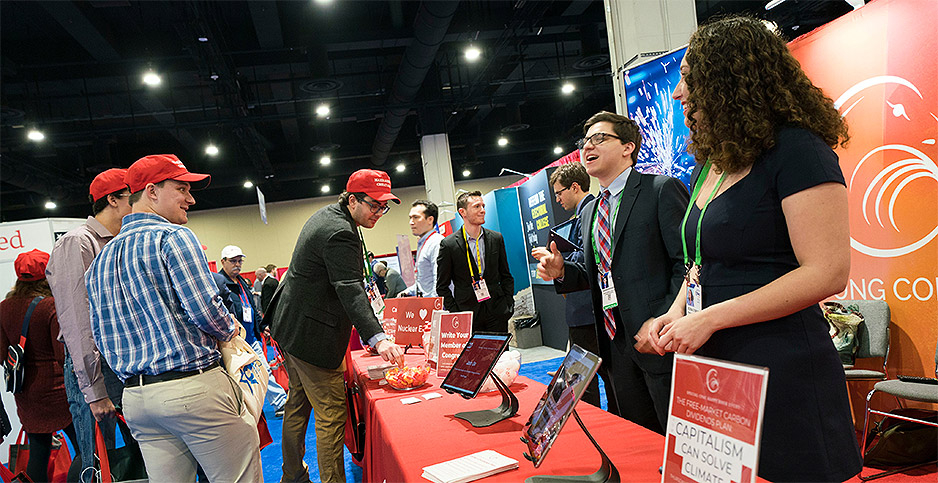 The battle for the future of the Republican Party’s climate change policy was bubbling under the surface yesterday at the country’s largest annual conservative confab.

The Conservative Political Action Conference, held in suburban Washington, has long featured events and engagement from groups that challenge the scientific consensus that climate change is far and away being caused by human activity via greenhouse gases, such as the Heartland Institute and the CO2 Coalition.

But groups that seek support policies to fight climate change from the right, like republicEn and Young Conservatives for Carbon Dividends, are at CPAC, too, growing in power and visibility after years of attendance with little fanfare.

The growth comes, not coincidentally, as the GOP searches for how to respond to increasing public calls for climate policies and its own responses to the Democrats’ Green New Deal, which conservatives see as overly costly and intrusive.

House Republican leadership in recent weeks has heeded that call by pushing policies such as encouraging tree planting and carbon capture, while many groups are advocating vocally for the carbon taxes.

The two sides rarely met directly at CPAC. One exception was a debate hosted by the CO2 Coalition, which pitted William Happer, a former adviser to President Trump who argues that increasing carbon emissions is good for the world, against Alex Bozmoski, managing director of republicEn, founded by former GOP Rep. Bob Inglis to advocate for climate policy.

"It’s very hard to see how CO2’s going to make much difference if you double or triple it. It’s because the effects of absorbing radiation, emitting radiation and cooling of the Earth have long since been saturated," Happer said.

"If you double CO2, it makes less than a percent difference in the amount of radiation going in space," he continued.

Bozmoski was having none of it.

"This isn’t science. The papers discussed have not been peer-reviewed. They haven’t been presented to the American Geophysical Union or the Association for the Sciences of Limnology and Oceanography. They’re published on the CO2 Coalition’s website, and the presentations are given at CPAC and PragerU," Bozmoski said.

"The CO2 Coalition’s … mission statement says, ‘To educate the public about the net benefits of CO2.’ The science is predetermined. The mission is to explain the conclusion already reached," Bozmoski added, referring to the group skeptical of mainstream climate science as "our gracious host."

For the most part, the eco-right and skeptic sides of the GOP kept to themselves. Unlike in previous years, CPAC did not organize its exhibit hall to put their booths next to each other.

"The future of the conservative movement is acting on climate change with conservative solutions," Benji Backer, president of ACC, told E&E News.

"You’re seeing a shift, with even the top Republicans in the country wanting to do something on climate change now. Two years ago, they would never have even considered it."

After ACC participated in the confab last year, conservative columnist Kevin Mooney labeled the group "liberal environmentalists" and accused it of having "infiltrated" the event.

Kiera O’Brien, president of Young Conservatives for Carbon Dividends, said she recognizes that advocating for carbon taxes goes against the grain at CPAC.

"Our policy is certainly new to some people, but we’ve had a surprising number of people who have heard of our policy or who are at least thinking about climate in a critical manner," she said.

O’Brien said she’s "been having a lot of conversations with young people" who want the GOP to have its own climate agenda. "It’s all about changing hearts and minds," she said. "And that is our victory."

Conservative climate activists are feeling more welcome at CPAC than they have been in the past.

"I really felt like the odd one out a couple years ago, much more so than today," said Bozmoski. "We’re having a discussion about what to do, not about whether or not to do something."

‘What are they doing here?’

But climate skeptics think they’re winning, too. They point to Trump’s repeated skepticism on climate, his policy rollbacks and the unpopularity of Democratic proposals like the Green New Deal.

Marc Morano, director of communications at the Committee for a Constructive Tomorrow, said carbon taxes — a main policy preference for many conservative climate activists — will never win in the GOP. It’s "dead on arrival," he said.

"I don’t think young people will be drawn in by ‘let’s give a massive new power to tax, but we’ll control it and we’ll rebate it,’" said Morano, whose group exhibited at CPAC. "There’s no way young people looking at it from a free-market perspective are going to believe it."

Steve Milloy, the author of the JunkScience.com blog, when told that a number of conservative climate groups were at the confab, asked, "What are they doing here?"

"My view of those guys is that they’re trying really hard to manufacture a reality that anybody cares about them. Trump has 95% Republican approval, so I kind of view Inglis and those guys as 2% or 3%," said Milloy, who worked on the Trump EPA transition team.

He acknowledged that young people are more likely to heed the "disinformation" activists push. But he was confident his side is winning and will continue to do so.

"As people grow older and learn things, not everyone is going to become a skeptic, but enough will."