Climate and Russia could combine to create a food crisis 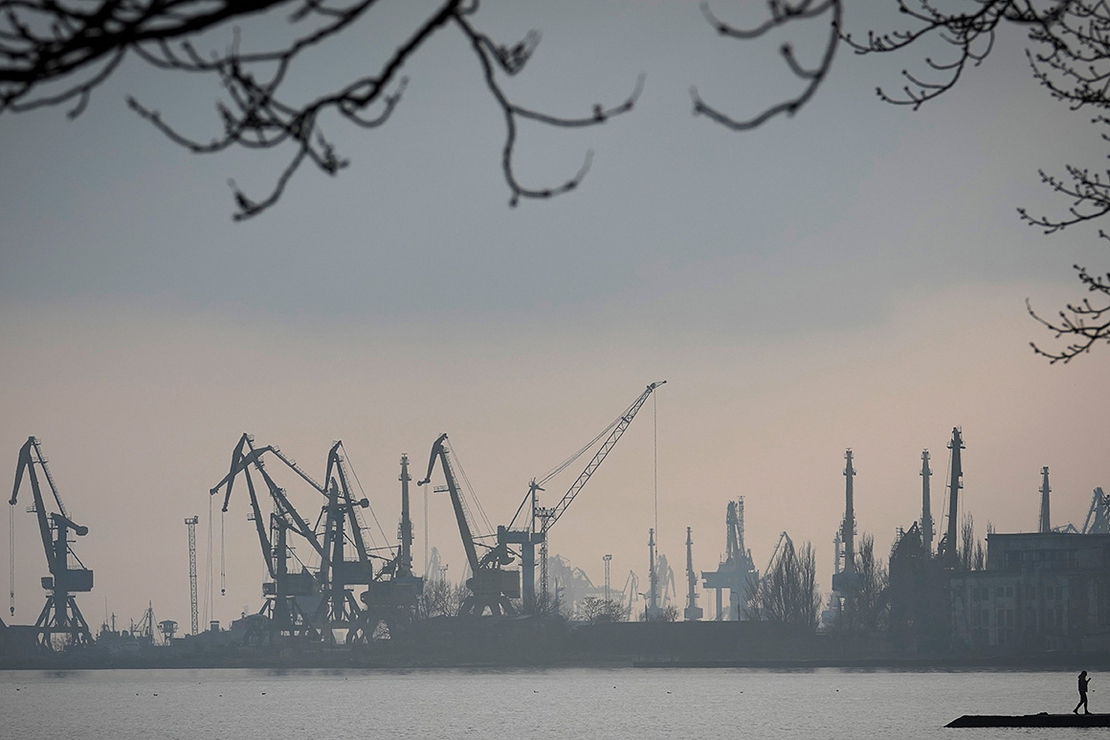 Harbor cranes are seen at the port in Mariupol, Ukraine, on Feb. 23, before Russian forces bombarded the city. Ukranian and Russian ports in the Black Sea are major hubs for wheat and corn, but traffic in and out has ground to a halt, effectively shutting down the world’s second-largest grain exporting region. AP Photo/Sergei Grits

Russia’s war in Ukraine is squeezing food supplies in countries that depend on those two nations for critical grains and cooking oils.

The halt in agricultural shipments out of the Black Sea has sent the price of wheat and fertilizer soaring and prompted growing concerns of a global food crisis.

In Turkey, people are scrambling to buy cooking oil in anticipation of further price hikes. Thailand faces surging costs for fertilizer and feed stock. Egypt, the top importer of Russian wheat, has banned exports of homegrown grain, and Indonesia has restricted exports of palm oil, a potential substitute for other vegetable oils. Aid groups worry that rising prices will exacerbate hunger in already vulnerable countries.

The Russian war is affecting two of the world’s agricultural powerhouses and comes as the global food system is already dealing with supply chain constraints due to the Covid-19 pandemic and climate-charged weather events.

Climate change could make the situation worse if agricultural production in the world’s other breadbaskets is disrupted this year by extreme weather events, said Jonas Jägermeyr, a climate scientist and crop modeler at the NASA Goddard Institute for Space Sciences.

“Climate change is increasing weather and yield variability and if severe weather events such as droughts, heatwaves, or floods will hit this season there will be compound effects, destabilizing the food system further,” Jägermeyr wrote in an email. “China already indicated that their wheat outlooks are very poor and other world regions don’t look great either.”

Russia, the world’s leading wheat supplier, recently banned grain shipments abroad and sanctions are likely to affect future exports. Ukraine is a top supplier of sunflower oil and a major wheat producer in its own right. It has suspended port activity. Together, the two countries produce about 12 percent of the food calories consumed globally.

Egypt, Turkey, Indonesia and Bangladesh are the top importers of wheat from Russia and Ukraine. Almost 50 nations, including some of the world’s poorest countries, depend on those two sources for more than 30 percent of their wheat needs, according to the U.N. Food and Agriculture Organization.

To respond to the immediate crisis, many of those countries are looking for supplies from other countries. The main concern will be next year’s harvest. If the war disrupts planting in April and May, “then we will be facing a serious situation,” Maximo Torero, chief economist for the Food and Agriculture Organization told the BBC News on Monday.

Torero estimates that the war could drive up wheat prices by another 8.5 percent, forcing people to eat less food at a time when hunger and malnutrition are rising due to impacts from the pandemic.

A ‘need where there wasn’t any’

The war is playing out as climate change alters the contours of global agriculture. Rising temperatures are already affecting crop yields and quality, and acting as a drag on agricultural productivity, an intergovernmental panel of climate scientists wrote in an assessment released last month. While most of the world has observed negative effects, ranging from lost livelihoods to increased food insecurity, the impacts have been felt unequally.

Parts of North America and Europe, for example, have witnessed productivity gains as global temperatures rise. But rising temperatures have led to extreme heat and downpours in West Africa, causing yields to drop for crops like sorghum and millet, and pronounced drought in Australia, where it has cut into wheat production.

“Climate change and weather extremes that are intensified by more extreme weather are disrupting food supply in a lot of vulnerable countries,” said Kyle Wilkinson, a communications officer at the U.N. World Food Program (WFP). “It creates need where there wasn’t any.”

The war is likely to make the situation worse. A report from the WFP estimates that 13.5 million tons of wheat and 16 million tons of maize are currently frozen in Russia and Ukraine. Afghanistan, Ethiopia and Syria are particularly vulnerable to delayed deliveries.

“The supply chain disruptions should be a wake-up call for people,” said Christopher Barrett, a professor of agriculture and development economics at Cornell University.

Russia is also the world’s top oil and fertilizer exporter. Both are instrumental to the global food system. A study published in Nature and co-authored by Barrett found that around three-fourths of the food costs to people worldwide are in the transport, processing, manufacturing and distribution of food, with fuel playing a significant role. Oil prices skyrocketed in the wake of the invasion but have declined in recent days.

“So the oil price shock matters because it gets picked up in the costs that manufacturers face, in the trucking to move food around,” Barrett said.

Rising fuel costs are also problematic for fertilizer. Natural gas is a raw input in synthetic fertilizers used in many parts of the world. The war has created uncertainty in global fertilizer markets, with some companies pulling back purchases of Russian-based fertilizers. Forecasts by the Food and Agriculture Organization show that parts of Africa could see a 30 percent decline in food supplies because of shrinking access to fertilizers, said Torero, the FAO economist.

‘It could be very negative’

Experts are just beginning to grapple with the long-term consequences of the war. Wheat is unique among other crops because it could potentially benefit from a warming planet. A series of studies have concluded that higher temperatures at northern latitudes could result in an increase in wheat production, unlike other major staples like rice or corn.

One of the bigger questions coming out of the war is whether other countries will boost production of wheat to compensate for shortages from Russia and Ukraine.

If that occurs on existing croplands in countries like the United States, with corn or soy growers switching to wheat, the climate impacts are likely limited, said Kim Kroll, who recently retired as the associate director of Sustainable Agriculture Research and Education, a program funded by the U.S. Department of Agriculture. But the climate costs rise as new land is converted to cropland.

“In some cases, it could be very negative,” Kroll said. “If Ukraine can’t go in and plant wheat, basically where is that market for wheat going to come on? Is that going to shift agricultural production or is that going to increase the footprint of agriculture?”

Craig Hanson, vice president of food, forest, water and oceans at the World Resources Institute, said one risk is that higher prices could lead to more clear-cutting for food production — and that could lead to increased emissions by unlocking carbon stored in the soil.

Higher energy prices could also lead to increased production of biofuels, which also have an impact on land use, he added.

“Land is finite, so you can only grow so much on it,” Hanson said.

Egypt underscores the potential risks. Officials there have said they’re planning to increase local wheat production to ensure food security. But the climate in Egypt today is not particularly well suited to wheat cultivation, said Barrett, the Cornell professor.

Wheat originated in the Middle East and remains a drylands crop, he said. But as the world has warmed, it’s gotten harder to produce wheat in the region of its provenance. That has meant a shift to higher latitudes, such as Canada, North Dakota — and Ukraine and Russia.

Continuing to produce wheat in places like Egypt will likely require irrigation — which could increase the use of fossil fuels for powering water pumps and raise demand for fertilizer. That means the price of wheat could be higher than it once was, Barrett added.

“We are facing some scenarios that are pitting short-term against long-term,” said Olivia Lazard, a visiting researcher at Carnegie Europe who studies eco-transitions and climate security.

That could lead to some destructive outcomes if competing countries start collecting and hording arable land, Lazard said.

Or the world could benefit if the current crisis helps boost support for efforts to decouple food systems from their fossil fuel dependence, said Barrett.

That could lead to more localized production, vertical farming fed by solar power and more plant-based substitutes to reduce the need for feed crops.

“We need to be developing more diversified systems much more decoupled from the traditional land and water resources we’ve relied on so heavily and at such a high climate and environmental cost,” said Barrett.

Correction: An earlier version of this story incorrectly described Indonesia’s restrictions on palm oil exports. The country has limited palm oil exports but not halted them completely.