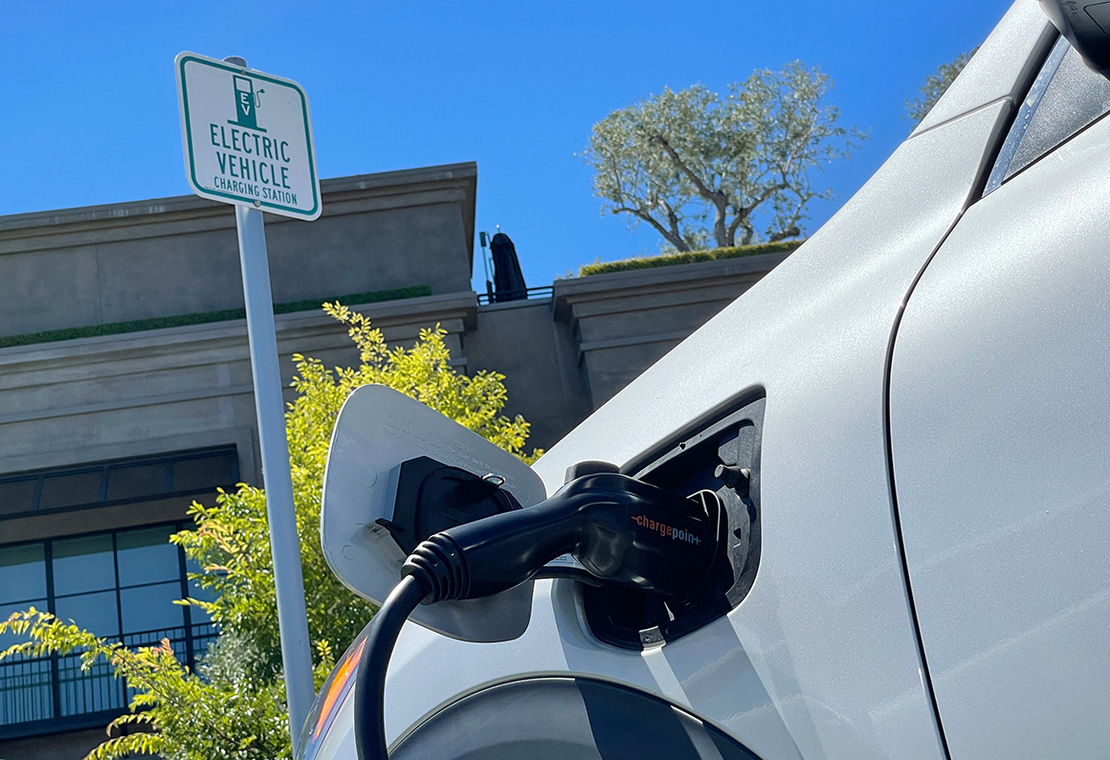 An electric car charges at a mall parking lot in June in Corte Madera, Calif. The new reconciliation bill limits its electric vehicle tax credit to cars made with critical minerals mined or processed in North America or in U.S. trade agreement nations. Justin Sullivan/Getty Images

The climate deal struck yesterday by Senate Majority Leader Chuck Schumer and Sen. Joe Manchin would significantly expand consumer tax credits for electric vehicles by offering a $7,500 tax credit to people buying an EV made with a certain percentage of minerals mined or processed in nations with U.S. free trade agreements, or recycled in North America.

But there’s a catch: The EV supply chain required for the tax credit doesn’t exist.

Minerals required to make market-ready EV batteries — lithium, cobalt, graphite and nickel — are primarily mined, refined and processed in China and Russia or in less adversarial nations like the Democratic Republic of Congo and Indonesia that aren’t parties to U.S. free trade agreements (Greenwire, Feb. 24).

That tax-credit provision is sparking concerns from climate activists and EV promoters that the much-lauded Senate bill could actually limit the effectiveness of its electric vehicle tax credit by putting an impossibly high hurdle in front of automakers.

“These things aren’t in place, and might not be for more than a decade,” said Morgan Bazilian, director of the Payne Institute at the Colorado School of Mines.

The requirement, he added, “may limit the amount of tax credits that get the full amount.”

There is currently a $7,500 tax credit for consumers buying electric vehicles, but it is limited to 200,000 vehicles sold per manufacturer, resulting in some automakers hitting that cap and no longer benefiting from the credit.

The reconciliation bill would expand this benefit by lifting the limit on how many vehicles can qualify for the credit. President Joe Biden and many congressional Democrats wanted to remove this cap because it could hypothetically supercharge consumer EV purchases and included language doing so in the House version of the “Build Back Better Act” that passed last year (Climatewire, July 21).

If signed into law, the bill would require EVs by 2024 to have batteries made with at least 40 percent minerals extracted or processed by a nation that is party to a U.S. free trade agreement, with the percentage measured by the value of the total minerals in the battery. Minerals recycled in North America could also be included in the percentage requirement.

The critical minerals content requirement for batteries would increase to 80 percent by 2027.

Half of the tax credit would be tied to the mineral requirement. The other half would be tethered to the battery component mandate.

Such requirements are in line with Manchin’s stated policy priorities. The West Virginia Democrat has slammed incentives to switch the U.S. away from fossil fuel-powered cars by citing the EV industry’s heavily reliance on minerals mined abroad, most notably in China (E&E Daily, April 8).

Supporters of the bill’s language say this requirement is precisely what the United States and its allies need — a mega-market signal to auto companies and mine developers that they should heavily invest in developing a made-in-America battery sector.

“For far too long ‘made in America’ has ignored the front end of the supply chain: domestically sourced mined minerals,” said Conor Bernstein, a spokesperson for the National Mining Association. “Requirements that minerals for batteries be sourced close to home rather than from geopolitical rivals directly supports high-paying, stable U.S. jobs that strengthen our economy, secure our supply chains and enhance our global competitiveness.”

National security hawks have long sounded alarm bells that a transition away from fossil fuels and toward electrified transportation and energy networks could increase the U.S. reliance on adversaries for mineral and metal supplies.

“Ultimately, we hope this will help to make automakers realize how serious it is that they can’t just rely on unreliable supply chains and that they’re going to have to focus much more on diversifying them,” Wulf said.

But Bazilian, an academic who advocates for climate action in tandem with a more robust American EV supply chain, said the percentages set by the bill could ultimately hinder the effectiveness of the tax credit into the foreseeable future.

“Even though this may get [Manchin’s] sign-off, and it might be very important to Manchin to get these percentages, they will likely not be reached,” he said.

“All it does is negate the tax credit,” said Brett Hartl, government affairs director for the Center for Biological Diversity. “It’s not like the car companies are deliberately overlooking a U.S. supply chain. It just doesn’t exist right now.”

Lauren Pagel, policy director at environmental nongovernmental organization Earthworks, said her group believes the language would essentially provide a subsidy for new mines in the U.S. and its allied nations “because now they need those mines to get their critical minerals percentages up, so their cars can be deemed clean under this bill.”

Joe Britton, executive director of the Zero Emission Transportation Association, which represents EV-related corporations big and small across the United States, from lithium mining companies to EV startups, said his group had pushed for “a more universally accessible credit” because “if you limit the credit, you limit the public benefits of the credit.”

He said he’s optimistic that if the bill is enacted, it would be an “enormous accelerant” for American EV manufacturing when combined with billions of dollars in the measure for building battery manufacturing and mineral processing facilities, as well as funds to reconfigure auto plants so they can make EVs.

But Britton is clear-eyed about the reality of the existing supply chain, conceding that “people are looking at their supply chains now” to “think through” how they “meet these targets.”

“I’m not saying there’s no concern,” he said. “These will make people reach.”