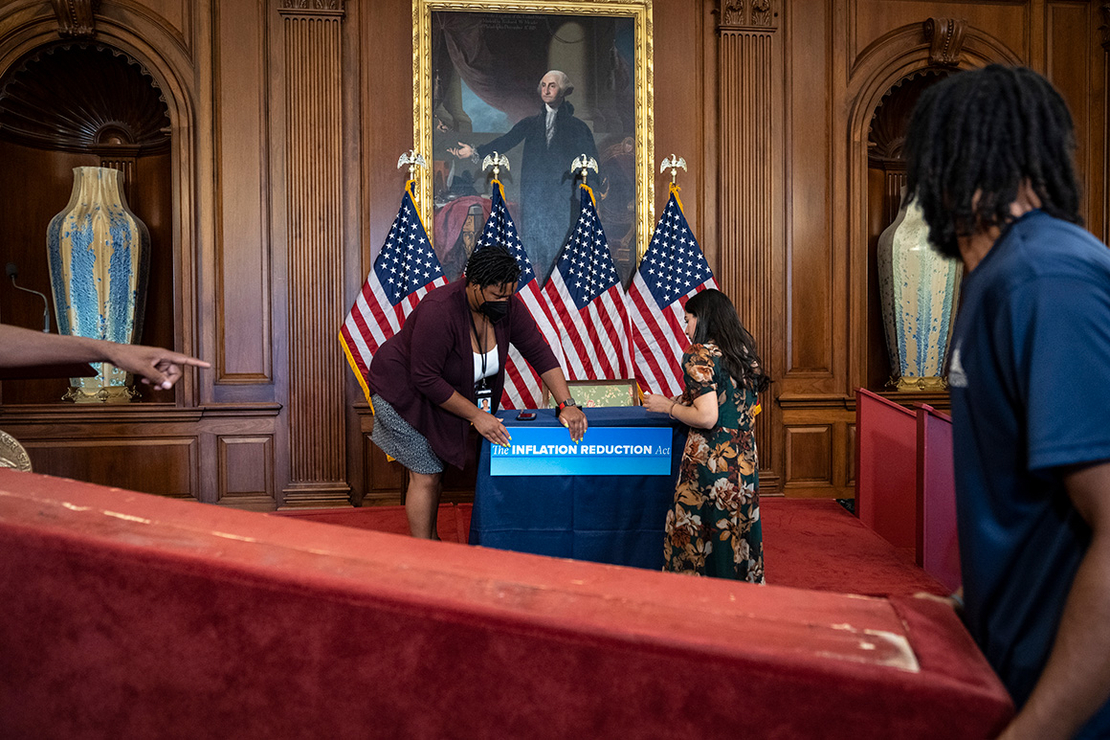 Passage of the Inflation Reduction Act could mean a wave of Democratic climate change and energy staffers moving from Capitol Hill to advocacy groups and lobbying firms.

The law, which includes $369 billion for climate and related matters, is by some standards the biggest piece of climate legislation to pass Congress.

The Inflation Reduction Act — along with other significant recent legislation, like the CHIPS and Science Act — are likely to spur demand for people with intimate expertise on how to make the most of the new laws.

There was a similar high demand following passage of the Patient Protection and Affordable Care Act and the Dodd-Frank Wall Street Reform law.

“A lot of the real action now happens on implementation. It goes to the agencies, they promulgate rules and regulations on how grant programs work, what the congressional intent was and the like,” said Blake Androff, a managing director at Signal Group and former Democratic Capitol Hill and Interior Department staffer.

“I think you’ll see a lot of the smarter firms making strategic investments in staff who are intimately familiar with the ins and outs of those historic pieces of legislation,” he said.

Signal, whose lobbying clients include Solv Energy and EnerSys, has been on a hiring spree of late, including from Capitol Hill.

“We are growing like gangbusters,” Androff said. “There is definitely a demand for our services now. We just need to make sure that we’re hiring as quickly as we can.”

Ivan Adler, a top recruiter for lobbying firms, associations and others, who calls himself “The Lobbyist Hunter,” said the race to get money from the energy-related programs in the Inflation Reduction Act will be a major driver of hiring activity.

Adler compared the likely hiring to the Affordable Care Act, which resulted in “unprecedented demand” for health lobbyists but predicted it won’t rise quite to that level.

“Although I don’t think the Inflation Reduction Act will be as impactful for hiring as Obamacare was, there’s still going to be a demand for people that know how the money is going to be spent,” he said.

The midterm elections could also push some Democratic staffers to seek private sector jobs. Democrats are likely to lose the House majority, though their fortunes have recently improved.

The minority party gets less funding for committee staff, and aides would have more trouble advancing the party’s legislative priorities.

Some Democratic aides are also likely to leave Capitol Hill for Biden administration jobs, both as a result of the new law and the election results.

A rush of Democratic staffers to the private sector isn’t necessarily a foregone conclusion.

“Without question, the last few years for congressional staff have been challenging. It’s been a marathon, from the bottom of the economy falling out during Covid, to developing a Covid response and crafting a number of Covid packages,” Bauserman said.

“Adding to that, Congress developed and passed a once-in-a-generation infrastructure law while concurrently moving on a once-in-a-generation climate and health law,” he continued. “In my 20 years in D.C., these have been some of the most difficult and challenging times for staff, from a sheer workload perspective.”

Furthermore, the Jan. 6, 2021, attack on the Capitol by supporters of former President Donald Trump weighed heavily on staffers and “really forced a reevaluation of public service” for some, he said.

Bauserman said many aides are still working on major priorities following the Inflation Reduction Act, and the possibility of Democratic gains in the midterms could buoy chances of more legislative wins next year.

Josh Lahey, a partner at the energy-focused lobbying firm Lot Sixteen, said some firms may feel the need to staff up following passage of the Inflation Reduction Act, but the law won’t push Lot Sixteen to add to its ranks.

“The people we’re talking to about coming to join the firm were already thinking about their next moves beyond the Hill,” he said. “They are leaving for other reasons, and if they can help on implementation, that’s great, but it’s not the sole reason they are leaving the Hill.”