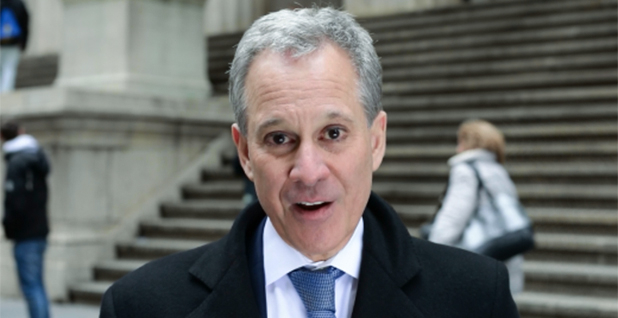 Schneiderman’s resignation announcement came just a few hours after The New Yorker magazine published an article in which four women who had been romantically involved with the state’s top law enforcement officer said that he had become violent and physically abusive during the course of their relationships. Two of the women were quoted by name.

Although he denied the gist of the allegations in a statement to The New Yorker, saying any sexual acts referenced by the women were consensual, he announced his intention to resign in a subsequent statement shortly before 10 p.m. He said his resignation would be effective at the close of business today.

"It’s been my great honor and privilege to serve as Attorney General for the people of the State of New York," Schneiderman’s resignation message read. "In the last several hours, serious allegations, which I strongly contest, have been made against me. While these allegations are unrelated to my professional conduct or the operations of the office, they will effectively prevent me from leading the office’s work at this critical time."

Schneiderman, who was elected in 2010 and was considered a likely candidate for governor in 2022, has emerged as a leading critic of President Trump and has fought the administration on a variety of legal and political fronts. Schneiderman’s office has taken the lead on dozens of lawsuits and other legal actions against Trump’s climate and other environmental policies — and a variety of other issues, including health care, immigration and abortion rights.

Just yesterday, Schneiderman and eight other Democratic attorneys general sent a letter to EPA Administrator Scott Pruitt arguing that the agency should halt planned changes to its standards for scientific research that is later used to write new regulations (E&E News PM, May 7).

Schneiderman has also sued — or threatened to sue — the administration on its methane policies, its auto emissions standards and its decision to gut the Obama administration’s Clean Power Plan.

With Republicans fully in control of all the levers of power in Washington, D.C., Democrats have increasingly looked to state attorneys general to use the legal system to attempt to put the brakes on Trump administration initiatives.

Schneiderman has also publicly discussed using state law to prosecute Trump administration and campaign officials in case the president decides to pardon current and former aides who have been accused of federal crimes.

Schneiderman’s political fall came quickly. He was a vocal supporter of the #MeToo movement who had talked openly of prosecuting disgraced Hollywood mogul Harvey Weinstein for sexually harassing or abusing dozens of women.

The New Yorker article suggested that Schneiderman’s ex-girlfriends decided to go public with their experiences after learning that other women had made similar allegations against him.

"It was just the most unexpected thing," Jane Mayer, one of the reporters who wrote the article, said last night on MSNBC. "He has been such a star in the Democratic Party."

Republicans were exulting in Schneiderman’s woes. White House counselor Kellyanne Conway last night retweeted an October 2017 tweet from the New York attorney general in which he wrote, "No one is above the law, and I’ll continue to remind President Trump and his administration of that fact everyday."

The New York state Legislature will choose a replacement to fill out Schneiderman’s term, which runs to the end of this year. Whether lawmakers will opt for a caretaker or someone who will be favored in an election this fall for a full term is hard to say; Democrats have a huge advantage in the state Assembly, while control of the state Senate is effectively deadlocked.

Just yesterday, Schneiderman, who was heavily favored to win a third term, had gotten his first Republican challenger: corporate lawyer Manny Alicandro. No Democrats had entered the race, but any number of candidates could jump in before the July 12 filing deadline. The primary will be held on Sept. 13.