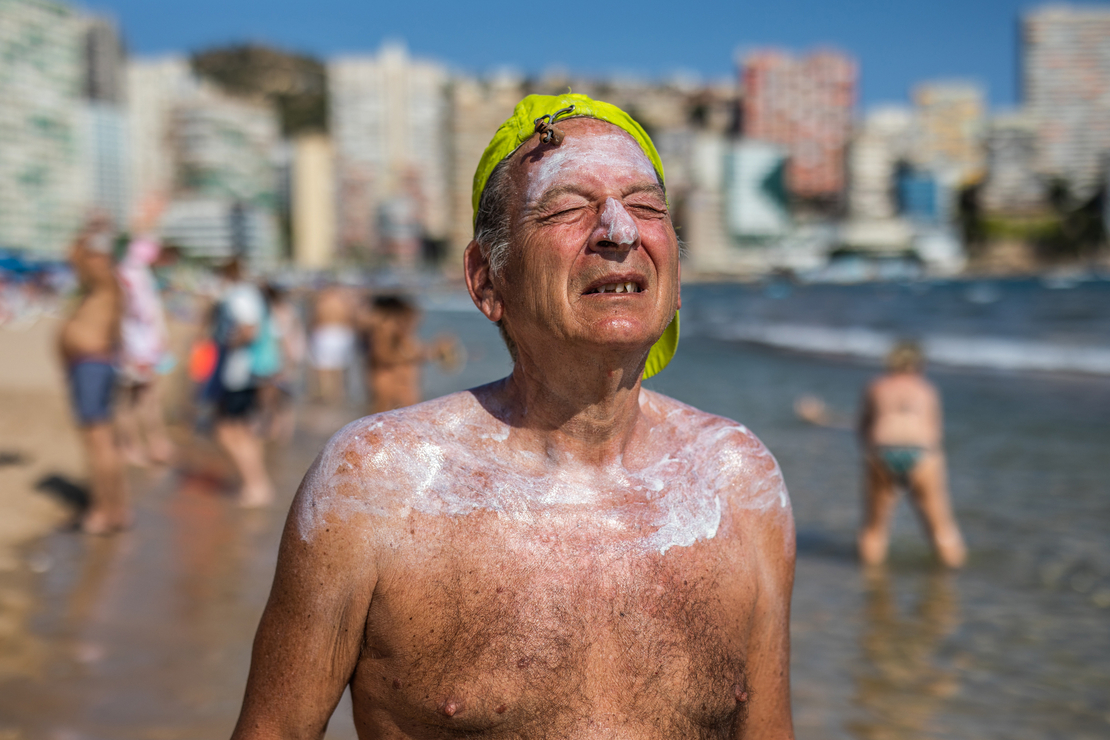 Jose Luis, a tourist from Madrid who is spending a few months in Benidorm, Spain, strolled along the Levante beach while covered with sunscreen during a heat wave last week. Zowy Voeten/Getty Images

Europe’s energy supplies were already under strain because of war and skyrocketing prices. Now, climate change is pushing them past their limits.

The historic heat wave baking Europe comes as the continent races to find enough natural gas to power its industries and fill storage tanks for winter. Gas flows have dwindled as Russia moves to withhold supplies from its neighbors.

Then blistering temperatures sent energy demand soaring as residents tried to stay cool amid extreme heat that has ignited wildfires across large swaths of Europe and killed more than 1,900 people in Spain and Portugal.

“Europe finds itself in the midst of a perfect storm when it comes to energy,” said Simone Tagliapietra, a senior fellow at Bruegel, a Brussels-based think tank.

Yesterday, the European Commission proposed that its 27 member states ration natural gas supplies to avoid shortfalls that could leave homes unheated this winter. The plan, if approved, would call on every E.U. country to lower its gas use by 15 percent through to spring.

In addition to driving up demand, and prices, the deadly heat wave is putting pressure on transmission lines, cables and generating units, according to a note from Rystad Energy. It’s also forcing major trade-offs between using water for agriculture or energy production.

Those pressures are only set to increase as global warming makes heat waves more frequent and intense. It’s a challenge countries are facing globally, but one that is worsening more quickly in Europe.

According to a recent study, heat waves in Western Europe are increasing in frequency about three times faster than elsewhere in the midlatitudes. And they’re intensifying about four times as quickly.

The current disaster in Europe was caused in large part by a phenomenon known as a “cutoff low” — when a swirling low-pressure system gets separated from the rest of the jet stream and spins off on its own. These events can cause weather systems, like heat waves, to linger in place.

A 2003 heat wave linked to tens of thousands of deaths across Europe remains one of the most shocking events in recent history. Yet it’s been rivaled by record-breaking heat waves in four of the past five years. Last summer was Europe’s hottest season on record, according to the European Union’s Copernicus Climate Change Service.

Studies suggest that extreme heat will only continue to worsen as human-caused emissions rise.

In Britain, where temperatures shattered the nation’s all-time heat record and topped an unprecedented 104 degrees this week, such eye-popping events may grow increasingly likely in the coming decades.

Similar increases in extreme heat are likely across the rest of Europe. One 2015 study found that even under a mild to moderate climate change scenario, summers as hot as 2003 will become common by the 2040s.

As temperatures rise across Europe, energy demand is likely to shift, too.

Today, most of Europe sees its highest electricity demand in the winter. But a 2017 study, looking at 35 countries across the region, found that peak demand will shift to the summer months in more than half of them under a severe, if relatively unlikely, climate change scenario.

Under a more moderate scenario, it suggests that total yearly consumption across all of Europe wouldn’t change much, but it would increase in southern parts of Europe while decreasing in the north.

That means places like Spain and Portugal may see rising energy demand, while places like Norway and Sweden see a decline.

Other studies have come to similar conclusions about the north-south divide in Europe.

That means summer, in particular, may start to become a season of stress for Europe’s energy infrastructure, especially during increasingly frequent extreme heat events.

A commitment to cuts?

Reducing fossil fuel use and its emissions is one way to stave off dangerous warming. Europe enshrined that commitment in law last year when it set a target of reducing emissions 55 percent by 2030.

But as energy supplies have grown tighter, European leaders have gone on the hunt for more fossil fuels that are exacerbating the heat waves and other disasters pummeling the continent this week. Those emissions also affect other nations, with the greatest burden often falling on the poorest people.

It’s a paradox highlighted earlier this year in India, where an unusually early and prolonged heat wave forced the country to burn more coal to keep people cool (Climatewire, June 2).

E.U. leaders say short-term increases in coal and liquefied natural gas use will help break their dependence on fossil fuels from Russia and accelerate Europe’s transition to clean energy.

In May, they outlined a plan to end Russian oil and gas imports by seeking supplies elsewhere. They also proposed boosting energy efficiency and dramatically ramping up renewable energy capacity. The plan called for filling gas storage facilities to 80 percent of capacity by November.

But Russia has restricted gas flows to roughly a third of what they were this time last year.

Russia’s state-owned energy giant resumed gas flows through a main pipeline to Germany yesterday following maintenance. That eased some fears of a complete shut off, but Europe is still bracing for further constraints on imports if Russian President Vladimir Putin continues to weaponize natural gas, as E.U. officials have accused him of doing. Further reductions would limit member state’s abilities to fill E.U. storage facilities beyond the 65 percent level they’re at currently, officials say.

The gas rationing proposal outlined yesterday by the European Commission would reduce gas use by 15 percent starting in August to allow member states to store fuel for winter and meet mandatory storage quotas.

The plan urges member states to promote energy efficiency measures, such as reduced heating and cooling in public buildings, and has an emergency measure that would impose mandatory gas cuts on member states if supplies reach critical lows or demand spikes. It also gives a nod to efforts to increase gas purchases from outside Russia.

“Where possible, priority should be given to switching to renewables or cleaner, less carbon-intensive or polluting options,” a press release on the proposal states. “However, switching to coal, oil or nuclear may be necessary as a temporary measure, as long as it avoids long-term carbon lock-in.”

Those exceptions have raised questions about how committed leaders are to addressing the drivers of climate change.

Officials in Germany have responded to declining gas flows by dusting off around 16 retired coal plants to provide reserve power.

It’s also sparked frustration and anger among leaders of developing countries who say wealthy nations are not living up to the promises they made at climate negotiations in Glasgow, Scotland.

“Last year in Glasgow some developing countries were vilified for stressing their national circumstances in relation to some of the desired outcomes in the Glasgow Climate Pact,” Barbara Creecy, South Africa’s environment minister, said during a climate summit in Berlin on Monday.

“Yet just over six months after Glasgow we’re witnessing many developed countries reverting back to coal in response to their negative national circumstances,” she added.

Still, energy experts say Europe has been moving in the right direction overall and that a temporary setback shouldn’t derail that trajectory as long as it continues pushing forward with plans to green the economy.

“Right now it’s obvious to everybody we need to double down on energy efficiency, on renewables, on clean hydrogen,” said Anne-Sophie Corbeau, a global research scholar at Columbia University’s Center on Global Energy Policy. “These are always the kind of things politicians talk about but need to really put in place.”