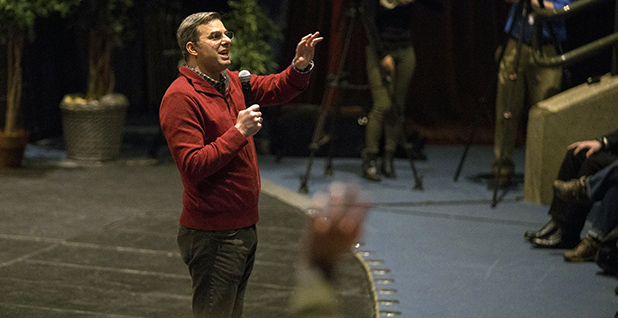 A new issue is pushing its way into Republican town hall meetings already boiling over with anger over health care, the refugee ban and Trump’s ties to Russia: climate change.

Over the Easter recess, constituents blasted a number of GOP lawmakers for their views on basic climate science. And while few voters ever list climate change as an issue that brings them to the polls, it has become a new point of tension in districts across the country.

It was most recently visible in the town hall of Rep. Justin Amash (R-Mich.), who told his constituents last week that a strong economy is the best way to protect the environment. Attendees booed as he exaggerated uncertainty around the basics of climate science, the notion that humans are the primary driver of climate change because of fossil fuel burning.

Without elaborating, Amash claimed that the "data set" underpinning climate science was inconclusive, something the vast majority of researchers in the field say is flatly false.

"I believe the climate changes," Amash said. "The question is, what do you do about it? The data set we’re dealing with is very small."

As the crowd booed him off and on for several minutes, he persisted.

"[The data set] is factually very small, unless you think the Earth is only a couple thousand years old," Amash said. "We have to take that into consideration."

About three-quarters of the American public now accept that the climate is changing, and about two-thirds recognize that it is primarily because of human activity, according to a recent Quinnipiac University poll. A separate CNBC poll found that more than 50 percent of the public oppose President Trump’s rollback of climate policies, while about 30 percent support his recent actions to eliminate President Obama’s effort to cut greenhouse gas emissions.

Climate change has not registered as an issue with Republican voters, but it has with Democrats, who have ranked it among their top issues, said Anthony Leiserowitz, director of the Yale Program on Climate Change Communication. And while the Trump administration and Congress have been unable to accomplish anything on health care or tax reforms, they have made tremendous changes to environmental policy.

That has angered some voters and pleased others. It’s too early to tell if the efforts of Trump and the GOP Congress to roll back environmental regulations are affecting Republican voters at all. But the town hall anger echoes the successful Democratic attack line used in the 2014 midterm elections to portray opponents as impervious to simple scientific facts, Leiserowitz said.

"It becomes part of a larger storyline, which I think we’re all being exposed to on a daily basis, that this president and some of these members of Congress are not telling the truth, are willing to disregard the conclusions of anyone who disagrees with them," he said. "That narrative that emerged in 2014 is now on steroids because we are asking if we are now living in a post-fact world."

Rather than simply ignoring the overwhelming body of climate research that shows humans are the primary drivers of climate change, some congressional Republicans have instead focused on the relatively small number of researchers who break from their colleagues to claim there is still doubt about global warming. A recent House Committee on Science, Space and Technology hearing tried to frame climate science as a debate.

Constituents who showed up to last week’s town hall for Rep. Andy Biggs (R-Ariz.), a member of the Science Committee, blasted him for his take on climate research. Last year, Biggs called climate change a "discredited theory." At his town hall, where he was interrupted repeatedly as constituents shouted him down, he claimed that government scientists were fabricating data. No evidence has been provided for that claim.

"The same attitude you take is the exact same attitude that Einstein faced over physics," Biggs told his angered constituents. "That’s exactly what happened to him. They shouted him down until he was able to demonstrate."

"You’re not Einstein," someone in the crowd shouted.

But do they vote … in the district?

Some Republicans are not convinced the outrage actually represents the true feeling in the districts.

Lawmakers won’t be swayed by angry constituents at town halls because they don’t accurately represent the district as a whole, said Frank Maisano of Bracewell LLP, a firm representing energy companies. Activists have been unsuccessfully trying to push climate science into the public realm, but it has amounted to nothing more than "background noise in the political forum," he said.

"It’s an activist group of environmentalists who are trying to throw this into the mix, and they do this all the time," Maisano said. "The people who are going to these meetings are an energized activist wing who are trying to undercut members of Congress who they just disagree with."

Still, vulnerable Republicans have to be wary of any issue in which their opponents could land an attack. Rep. Greg Walden is the only Republican House member in Oregon. He returned for a series of town halls that one radio reporter described as walking into "a buzz saw."

Most of the anger was reserved for the Mexican border wall and Walden’s backing of some Trump policies, but voters also took him to task for his stance on climate change. One woman called Walden, who is chairman of the House Energy and Commerce Committee, a climate denier, according to The Washington Post.

"We don’t like climate change deniers; we need your word you will not desert us on this," she said.

Even in oil-rich Texas, some lawmakers faced heat for denying that humans are driving global warming. In a tense town hall for GOP Rep. Joe Barton, audience members started shouting at him for saying that climate change is not caused by man-made emissions. He incorrectly claimed that cloud cover is a primary factor in the heating of the planet and accused U.S. EPA scientists of fraud for manipulating data.

"There is no unequivocal evidence that man-made CO2 is either positively or negatively impacting the atmosphere," he said. "It’s true that CO2 concentrations are going up, but the cause of that is very debatable."

"What if you’re wrong?" someone shouted.