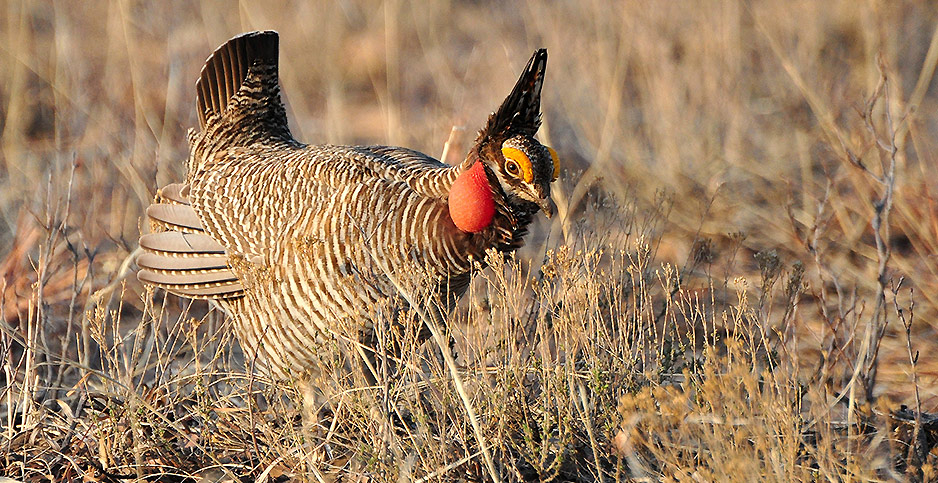 The lesser prairie chicken, a moniker that belies the flamboyant species it describes, now has a lawsuit to its name.

Once abundant on the vast plains of the central United States, these birds — punctuated with flashes of red and yellow — attract mates with a famous song-and-dance routine every spring. But their numbers have been in fast decline, partly due to increased prairie temperatures spurred by global warming.

That decline has led to increased Endangered Species Act litigation from parties seeking stronger protections for the bird. They’re using climate change impacts to bolster their claim that the lesser prairie chicken’s habitat is at risk.

Emily Jeffers, an attorney for the Center for Biological Diversity who’s worked on ESA cases, said the law gives species some much-needed "breathing room" in an era of climate change.

"We have a really strong tool to give species some protection that they need while the world deals with carbon emissions," Jeffers said.

Since the early 2000s, climate change has cropped up in more than 100 ESA lawsuits, according to an analysis by the Sabin Center for Climate Change Law at Columbia University.

While advocates sue for protection in the face of imperiled habitats, industry groups most often push back on the regulation of land for species that they say don’t need to be listed.

In 2014, for example, the Fish and Wildlife Service withdrew a proposed listing for the wolverine, a weasel species reliant on spring snow seasons truncated due to global warming. And just last month, environmental groups sued Interior Secretary David Bernhardt to list Yellowstone bison as threatened, in part, by climate change.

But many experts say these types of suits can’t be relied on as the next frontier of climate action. It’s going to take more than a series of court battles to hit the root of the issue, Defenders of Wildlife attorney Jason Rylander said.

"We really need serious political action and global political action to redesign our fossil fuel-based economy, and, you know, piece-by-piece litigation under the ESA is not going to do that," Rylander said. "We’re not at the point where I’m going to be able to sue Detroit over sea ice loss in the Arctic."

Climate issues have a complicated past under the ESA.

In 2005, CBD petitioned for the polar bear to be listed as a threatened species, a case that would become the most high-profile ESA climate issue ever.

Under threatened status, a species is "likely to become an endangered species within the foreseeable future," and advocates argued that global temperatures put the bears’ habitats at risk.

Once a listing is complete, federally sanctioned projects that could potentially jeopardize species habitat must first go through a consultation process with expert agencies.

According to Lewis & Clark Law School professor Dan Rohlf, outcomes from the case "shut the door" on targeting greenhouse gas emissions through the ESA.

Prior to the decision, the ESA prohibited any activity that killed or harmed a protected species. But in the aftermath of the polar bear listing, government officials crafted a new stipulation that eliminated those prohibitions for greenhouse gas emitters.

The new rule eliminated ESA liability for emissions outside the range of the polar bear habitat. If the government couldn’t trace specific emissions activity to specific harm done to the bear, then it wasn’t considered prohibited by the ESA. The same justification applied to consultation for projects affecting the polar bear.

"Any contribution to climate change would be indirect effects that would not be reasonably certain to have any specific impacts on any specific species," Rohlf said. "So that essentially took [ESA consultation] off the table for climate change impacts."

Since then, no one has seriously challenged those decisions, he said, but he noted that litigants have instead looked to climate from "the other end" of ESA litigation.

There, the 9th U.S. Circuit Court of Appeals upheld protections for steelhead salmon in Oregon, agreeing with lower courts that the National Marine Fisheries Service, also known as NOAA Fisheries, "failed to analyze properly" the effects of climate change in its required ESA analysis for a proposed dam project.

But success in those cases has been mixed. Rohlf explained that judges will often defer to the government if plaintiffs haven’t brought compelling climate research previously unconsidered by agencies.

"Climate change certainly adds a potential issue to fight," Rohlf said. "But it doesn’t really change the analysis that a court goes through."

As more species emerge as threatened because of climate risks, Rylander says the question of how to project risk gets a "bit tricky" in court battles.

"The easy question, and the increase in litigation, is going to be over … greater and greater numbers of species that are threatened by climate change," he said. "The harder question is going to be what to do about it."

The ESA grants protections based on "foreseeable" risk on a species’ direct habitat, but the consequences from climate change could stretch far beyond such a limited scope required for remedy.

"The large models of climate change deal with really macro-level changes," he said. "But the smaller the area that you’re looking at — like the smaller the range of the species — the harder it is to predict with precision."

The case for the wolverine, for example, didn’t prevail against those hurdles.

Former Fish and Wildlife Service Director Dan Ashe wrote of the decision to withdraw the listing proposal: "We simply do not know enough about the ecology of the wolverine and when or how it will be affected by a changing climate to conclude at this time that it is likely to be in danger of extinction within the foreseeable future."

Additionally, there is always a chance a species will adapt better than projections say it will, Weiland added.

"I think for a lot of [species], we aren’t really sure how well they’ll be able to adapt to, for example, a future where the mean temperature is, you know, 2 degrees warmer during the summer."

Jeffers doesn’t buy that argument, though, calling it a "really bizarre framing of the question" that comes up often in industry briefs.

She is part of a lawsuit advocating for ESA protections for the Pacific walrus, which government lawyers say isn’t warranted due to "the potential for walruses to adapt to the loss of sea ice."

"There’s no evidence that walrus breed on land, like, that’s never, ever been observed," she said. "And industry is saying, ‘Well, maybe they could, we just don’t know.’ I find that sort of disingenuous."

In 2016, oil and gas interests challenged the listing of ringed and bearded seals, arguing that the populations were too healthy to be considered threatened because of "speculative" risk of diminished sea ice.

They prevailed in the U.S. District Court for the District of Alaska, but the 9th Circuit upheld the listing, finding that sea ice projections that stretched to the end of the century used the "best available science" to ascertain foreseeable harm.

New rules proposed by Bernhardt would streamline federal habitat protections and consultation for listed species, an attempt by the Trump administration to stanch the constant flow of ESA litigation (Greenwire, July 24, 2018).

The proposal could allow the administration to acknowledge climate change is happening but claim uncertainty on how it will affect species beyond the immediate future, Rohlf said.

A press release about the policy shift said FWS and NOAA Fisheries "are proposing an interpretation of ‘foreseeable future’ to make it clear that it extends only as far as they can reasonably determine that both the future threats and the species’ responses to those threats are probable."

Rohlf said the emphasis on "probability" is going to raise the bar on what kind of proof animal advocates can prevail on.

"I think what that does is just increase the services’ ability to cite uncertainty," he added. "That’s a substantial regulatory change that could really affect listings."