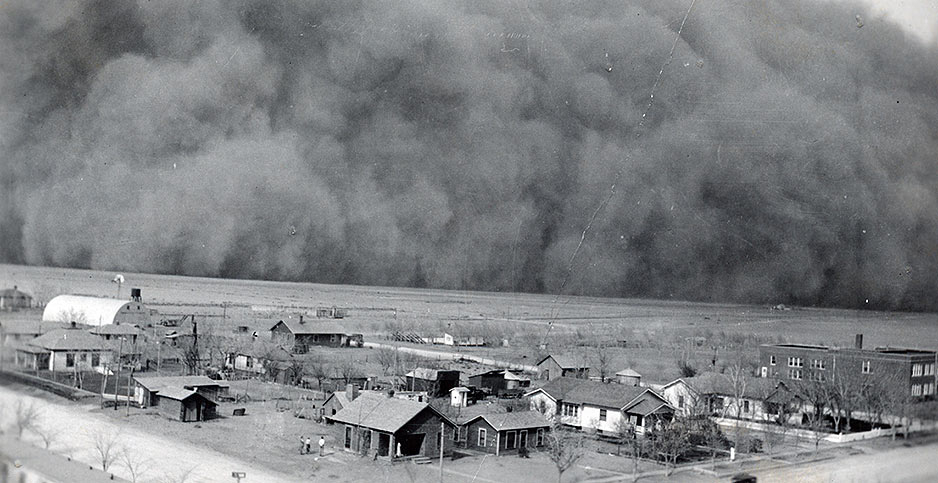 A dust storm closes in on Rolla, Kan., in 1935. Conservationists say measures like reduced tillage and preservation of grassland have lessened — but not eliminated — the likelihood of such events. Library of Congress

OAKLEY, Kan. — The need to take better care of America’s rural lands came to the nation’s capital — literally — on March 21, 1935.

That was the day federal Soil Erosion Service director Hugh Hammond Bennett testified to a congressional subcommittee in favor of boosting farmland conservation, just as a dust storm that had originated in the Great Plains a few days earlier arrived to darken the skies of Washington.

Bennett’s testimony helped make a case for creating the Soil Conservation Service, and with it decades of federal help to avoid another Dust Bowl.

Decades later, Matt Bain, western Kansas conservation manager for the Nature Conservancy, can step on the evidence of those days on a field in Oakley, along an old fence row. That’s a common sight in parts of the state, he said. "You’re standing on humps, and you can see fenceposts coming up a few inches."

The legacy of the "Dirty Thirties" lurks in the background when people worry about losing long-established grassland to row crops. Some people say they don’t rule out the possibility that a similar crisis could return — depending how the nation’s land policies unfold in the coming decades.

"With some mega-drought, we’re going to see things blow out again," said Kelly Kindscher, an environmental studies professor at the University of Kansas who specializes in native prairie vegetation.

To Kindscher, the lessons of the Dust Bowl translate to today’s challenge of responding to climate change. That means maintaining grassland, both native sod that has never been broken and land that has been set aside through the Conservation Reserve Program, through which the Department of Agriculture pays farmers not to plant crops for periods of 10 or 15 years.

While the storms of the "Dirty Thirties" are well in the past, smaller-scale dust storms hit Kansas as recently as 2013 and 2014.

"It’s within recent history that we’ve had dust storms," said Dan Meyerhoff, a 38-year employee of the Natural Resources Conservation Service who’s now executive director of the Kansas Association of Conservation Districts. "You can’t see your car in front of your eyes."

The Depression-era dust storms resulted from years of drought and poor farming practices that had turned prairies into cropland subject to wind erosion.

By 1913, an area 15 miles wide by 20 miles long between Colby and Rexford in western Kansas had been "scoured to the bone," with no vegetation, according to historical displays at the Prairie Museum of Art and History in Colby.

Western Kansas is already semiarid, receiving less than 20 inches of rain a year, or less than half of what the eastern end of the state receives. Federal policies encouraging the planting of wheat during World War I set the stage for converted land to blow away when severe drought hit repeatedly in the 1930s. The government didn’t yet have a conservation service — a mission that would come along after the problem grew too severe to ignore.

Economics played a role. Prices for wheat tumbled after World War I, and rail companies raised their rates, so that farmers were being paid less than their cost of production. Wheat and cattle markets collapsed in 1922.

Farmers didn’t use the dry-land techniques that the government now promotes, and were plowing deeply into fresh cropland. Little tillable land was left alone.

"If it was flat enough to get a plow onto it, it was cropped," said Bain, from the Nature Conservancy, which supports efforts to preserve native prairie, including by limiting crop insurance for farmers who plant on it.

In retrospect, Bain and other conservationists told E&E News, some land that was plowed probably never should have been pressed into service for crops. Now that it has been, farming methods such as reduced tillage that leaves more plant residue in the ground, and terraced fields, are keys to protecting the ground, as are conservation programs such as CRP that cycle some tracts out of crops and into grass, they said.

"Farmers’ practices are so much different than they were in the ’30s," Meyerhoff said. "Most are trying leave residue. No-till has made a difference, absolutely."

A report by the Environmental Working Group bears out Meyerhoff’s observation. Crop residue management and terraces have been the second- and third-most-used practices for the USDA’s Environmental Quality Incentives Program in Kansas, ranking behind brush management, the EWG said.

On the other hand, residue management has been on the decline in Kansas, the EWG report shows. After peaking at 1,420 contracts in 2007, just 114 producers reported residue management as a practice on their EQIP contracts, the EWG found. Total payments on those contracts plummeted from more than $5 million in 2008 to $437,129 in 2015.

Farmers may be tilling again because weeds have developed resistance to chemical weedkillers such as glyphosate, sold by Monsanto Co. under the brand name Roundup.

"Normal chemicals are not working anymore," said Kevin Holle, a farmer near Atwood, in northwest Kansas, who added that he’s considering tilling once or twice a year for weed control, after practicing no-till in recent years.

One especially troublesome weed is kochia, a damaging summer annual common in the Great Plains. Holle said kochia resists not only Roundup but 2,4-D, developed by Dow Chemical Co. "It’s resistant to all of it," he said.

"Some have gone back to tilling. That’s a huge concern," Meyerhoff said. But conservation district officials are against government mandates and would rather see Congress boost funding to help farmers, he said.

"We don’t want to see them regulated into doing it," Meyerhoff said. "I think they’ve proven over the years that voluntary conservation works."

Bain said he doesn’t think another Dust Bowl is coming. But, looking across the countryside from a low bluff, he sees fields of corn where prairie grasses once stood — and he admits he’d rather see cattle grazing there.