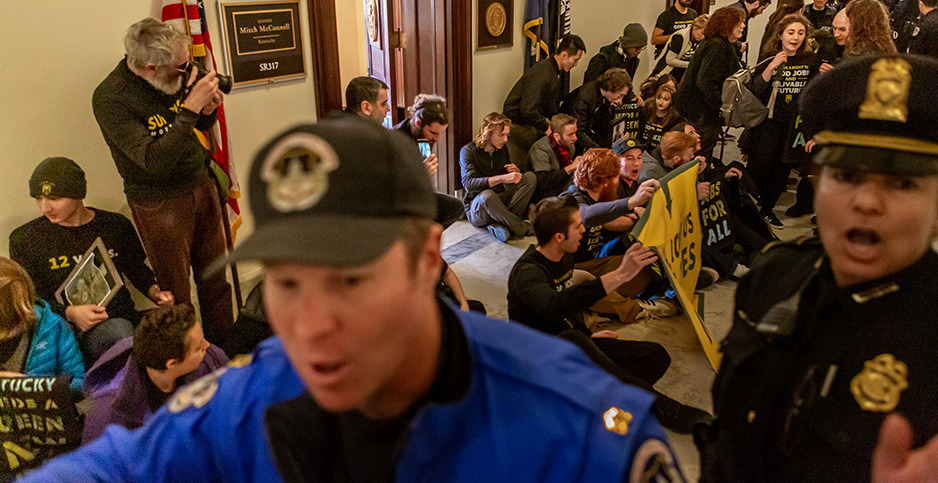 All of a sudden, it’s gotten really hard to escape climate change.

Not the problem itself — that threat has been looming for a while now. But discussions about global warming have hit a fever pitch in recent months, often overwhelming other issues in Congress, on television and on the campaign trail.

How long it will last is anyone’s guess, but several lawmakers and activists said the buzz has reached a level unmatched since congressional Democrats tried to pass cap-and-trade legislation 10 years ago.

"For the first time in a long time, the Senate is finally debating the issue of climate change, and it’s about time, if you ask me," said Senate Minority Leader Chuck Schumer (D-N.Y.) in a floor speech yesterday.

One driving factor, of course, was the introduction last month of a symbolic resolution meant to support the Green New Deal, a well-branded and ambitious plan to tackle climate change with a government-led jobs program (E&E Daily, Feb. 7).

It hasn’t hurt either that the proposal is being championed by Rep. Alexandria Ocasio-Cortez (D-N.Y.), a charismatic freshman lawmaker with a huge media following.

"Since @RepAOC and I introduced the #GreenNewDeal a few weeks ago, Americans have been talking about climate change on a scale that I haven’t seen in more than a decade," wrote Sen. Ed Markey (D-Mass.) in a Twitter post this week. "We’ve ignited a national debate on climate change, and we must keep pushing!"

The discussion isn’t just about the Green New Deal, though.

In his floor speech, Schumer called for the creation of a Senate committee on climate change that would mirror a panel on the House side.

"Over the next few decades, climate change will affect every part of American life," said Schumer. "If there was ever an issue that demanded particular focus from this chamber, it’s climate change."

His request — which Senate Republicans are unlikely to support — is one part of a full-court press by congressional Democrats.

They’ve demanded a full day of debate on global warming, sought to pass a messaging resolution declaring that climate change is real and dangerous, and held more than a dozen hearings on the topic since January (Greenwire, Feb. 28).

"A decade ago we came close to passing legislation, but I think this moment is unprecedented in terms of the political energy behind climate action," said Elizabeth Gore, senior vice president for political affairs at the Environmental Defense Fund. "There have been 17 climate-related hearings in the House — and the creation of a new committee focused on this issue — just since the start of this year."

That hasn’t been lost on Democrats running for the White House in 2020.

Several have signed on as co-sponsors of the Green New Deal, from Sen. Kamala Harris of California to Sen. Kirsten Gillibrand of New York. Washington Gov. Jay Inslee launched his bid by saying he’d make "defeating climate change our nation’s No. 1 priority."

Even former New York City Mayor Michael Bloomberg — who this week backed out of the presidential sweepstakes — declared his intent to spend big on a new effort to wean the United States off fossil fuels (E&E Daily, March 6).

"At the heart of Beyond Carbon [campaign] is the conviction that, as the science has made clear, every year matters," he wrote.

Republicans have gotten into the discussion, too — though often for different reasons.

For many, the Green New Deal has offered a convenient foil for them to paint liberals as socialist or out of touch.

But the attention from the right hasn’t been all about the Green New Deal.

On Tuesday, Sen. Lisa Murkowski (R-Alaska) used her perch as chairwoman of the Energy and Natural Resources Committee to hold a hearing on climate change and the electricity sector.

"We do have a considerable role to play in developing reasonable policies that can draw bipartisan support that I think will be a pragmatic contribution to the overall discussion," she said (Climatewire, March 6).

Sen. Pat Roberts (R-Kan.), who leads the Agriculture Committee, said this week that his panel would soon examine the effects of climate change and severe weather on farming.

"Nobody that I know of in farm country does not realize we have climate change," Roberts told the Bloomberg news service.

Some House Republicans, too, have called on their colleagues to confront climate change after years of mostly ignoring the problem.

"We must address climate change in ways that focus on American prosperity and technological capabilities while maintaining America’s leadership in clean and renewable energy innovation," wrote Republican Reps. Greg Walden of Oregon, Fred Upton of Michigan and John Shimkus of Illinois wrote in a recent op-ed.

It’s enough of a change that one former Republican lawmaker called it "historic and unprecedented."

"You have senior Republicans acknowledging this threat [and] recognizing that the government has a role in addressing it — directly challenging the president and the administration on some of their views," said former Rep. Carlos Curbelo (R-Fla.), who stood almost alone last year in championing a carbon tax bill. "This is an important political moment in our country, and whenever we get a bipartisan climate solution … we will look back at this time and say this was the beginning."

Media attention, too, has followed the discussion.

Sen. Sheldon Whitehouse (D-R.I.) has been keeping an eye on how often climate change is mentioned during the Sunday news talk shows, and he noted recently that there was a big uptick even between January and February.

"This month, #climatechange was mentioned 10 times on Sunday shows’ programming & 7 of these were part of a substantial discussion on #climate," he wrote on Twitter. "A big increase from last month. That’s progress."

Overhanging all the discussion, however, are two central questions — how long the momentum will last and whether the discussion will lead to a significant change in U.S. policy.

For now, both Democrats and Republicans are debating global warming with the belief they can gain politically by highlighting climate change and the Green New Deal.

To that end, several Senate Democrats and Republicans took to the floor yesterday to debate the issues, often heatedly.

But given President Trump’s dismissiveness of climate change, it’s highly unlikely he and Congress will agree to an aggressive answer to global warming.

That means much of the issue’s fate will rest with the outcome of the 2020 elections, both for Congress and the White House.

And for some activists, that’s a fine enough reason to keep talking.

"In 2016, climate change was barely discussed in the presidential debates," wrote activists with the Sunrise Movement, who have championed the Green New Deal, in a Twitter post last week. "In 2020, it’s going to be a top issue."