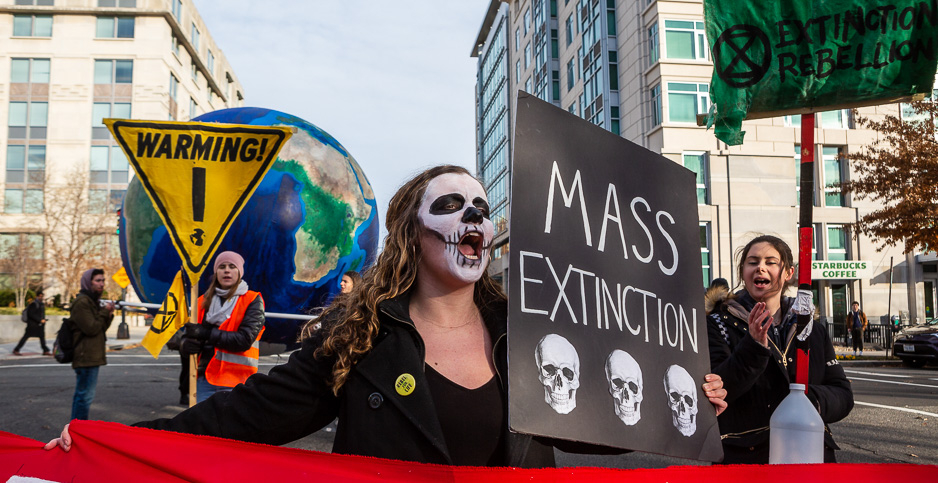 Demonstrator Natalie Boland, 25, wore skeleton makeup to today's rush-hour protest along with two other women. "We are sort of the unfortunate souls that weren't able to make it through the climate crisis," she said. Francis Chung/E&E News

Extinction Rebellion and the group Shut Down DC impeded traffic flow this morning to protest the World Bank’s and International Monetary Fund’s financing of the fossil fuel industry. The demonstration coincided with protests in Europe over the U.N. climate conference in Madrid. In the afternoon, protesters joined actress Jane Fonda’s Fire Drill Fridays event.

"We’re going to shut down streets and inconvenience people so they have to think about what is going on right now," said 18-year-old Tess Goddard, a first-year student at George Washington University.

Goddard clutched a light blue banner that said "Climate Justice" while stopping traffic along 20th Street as cars beeped their horns. She joined a climate action group at the university called Sunrise GW about a month ago; this was her first time participating in a D.C. shutdown.

An out-of-state student from Los Angeles, Goddard is worried about the impacts to oceanside communities from sea-level rise. She said banks are "enabling the climate crisis right now" through their investments in fossil fuels.

University of Maryland sophomore Michael Hayes, 19, held a sign that said "Ecocide is Suicide" while standing at various intersections in Washington.

Hayes is part of the university’s Extinction Rebellion chapter, which was founded this year. He attended the previous D.C. shutdown Sept. 23 (Greenwire, Sept. 23).

"We just want to show that they need to step up their game and make a real commitment to fighting for our future and not holding on to relics from the past, which will ultimately result in our extinction if we’re not careful," Hayes said.

About 100 protesters marched from University Yard on the George Washington University campus to an intersection near the International Monetary Fund and World Bank. They later split off to block streets all over the city.

While marching to the intersection, Natalie Boland, 25, told E&E News she participated today because she has "an immense amount of climate anxiety."

Boland was one of three women who wore skeleton face makeup and protested alongside a man dressed as Santa Claus with a gas mask.

"We kind of wanted to pair this with our sort of dystopian take on Santa Claus, who’s carrying a bag of coal here," Boland said. "So, we are sort of the unfortunate souls that weren’t able to make it through the climate crisis."

‘Fighting for our future’

While blocking the intersection of E and 20th streets, protesters chanted the question, "Whose future?" They responded: "Our future."

At one point, protesters stopped to take a water break along their route.

Russell Gray, 25, gave a toast to "all the people who are in the streets fighting for our future."

The D.C. chapter spent a week in the office of House Speaker Nancy Pelosi (D-Calif.) leading up to the Thanksgiving holiday recess (E&E News PM, Nov. 18). Nine members of the group were later arrested for storming the parts of her office considered off-limits (E&E News PM, Nov. 21).

Boland, who wore the skeleton face makeup, started working for Extinction Rebellion a few months ago in D.C. Holding a sign with skulls stating "Mass Extinction," she said the threat of climate change has made her question whether she will have children.

"It’s an important thing to think about because I don’t want to bring children into a world that is uninhabitable," Boland said.

For Hayes, the climate change fight has been intimidating but also exhilarating.

"It’s a bit invigorating and exciting to be a part of a movement that’s so powerful and forceful," Hayes said.