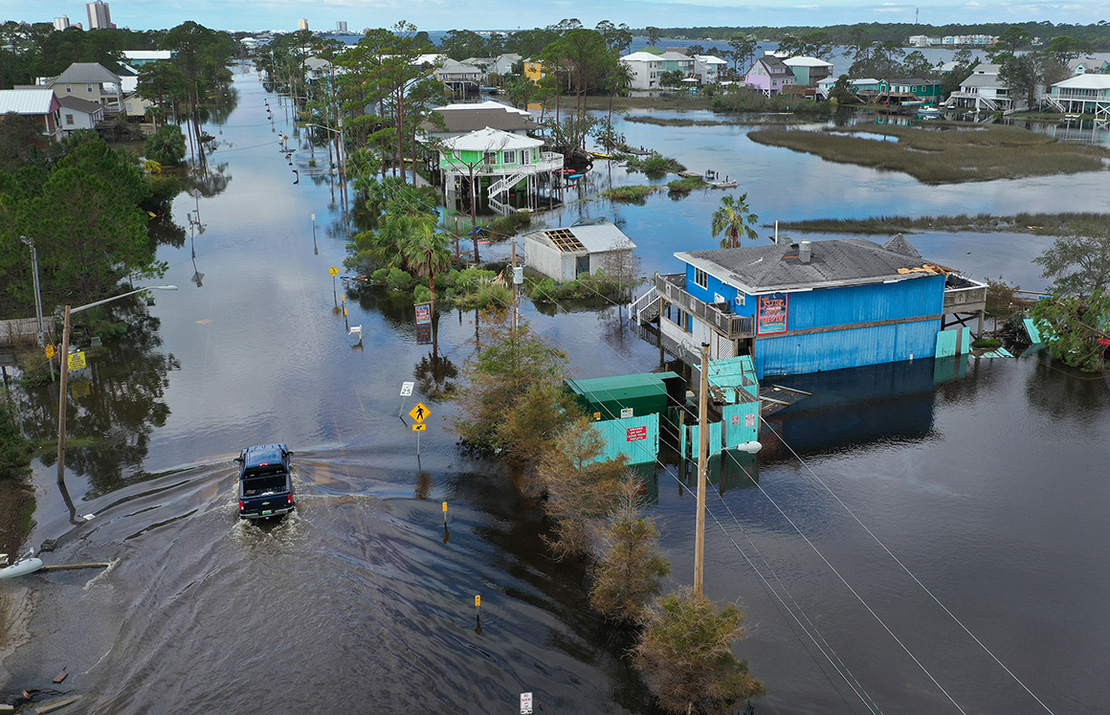 An aerial view from a drone shows a vehicle driving through a flooded street in Gulf Shores, Ala., after Hurricane Sally passed through the area in September 2020. Joe Raedle/Getty Images

Climate change helped fuel stronger, wetter storms during an unusually active Atlantic hurricane season in 2020, a new study finds. The cyclones produced significantly more rainfall than they would have in a world without global warming.

That’s looking at all the cyclones that formed across the Atlantic basin, including both tropical storms and hurricanes. When the scientists focused only on hurricane-strength storms, they found that the influence of climate change was even stronger. Climate change increased three-hour rainfall rates by about 11 percent and three-day rainfall by about 8 percent.

It’s a snapshot of what’s likely a long-term trend.

“As the global surface temperature continues to rise, we would expect to see continued increases in rainfall in tropical cyclones due to climate change,” said Kevin Reed, an expert on extreme weather events at Stony Brook University and lead author of the study.

That means a greater risk of damaging floods when storms make landfall. It’s a warning sign to coastal communities that they should plan accordingly, Reed noted.

“We’ve built a society and built infrastructure that has focused on the weather that we experienced in the 20th century — and our weather has changed,” he said. “So it’s important to think about ways we can adapt our society to handle those changes in weather.”

The 2020 Atlantic hurricane season broke records left and right. It produced 30 named storms, the highest number in recorded history. Twelve of them made landfall in the continental United States, also a record-breaker.

Of the 14 storms that reached hurricane strength in 2020, 10 underwent a process known as “rapid intensification,” according to NOAA — that’s when a storm’s wind speed increases by at least 35 miles per hour in a 24-hour period. That ties 2020 with 1995 for the record number of rapidly intensifying storms in a single season.

Last year also was an above-average hurricane season, although not as busy as 2020 — it produced 21 named storms, seven of which became hurricanes.

Another active season may be in store for this year. Researchers at Colorado State University just updated their annual forecast for the 2022 season, predicting 19 named storms and nine hurricanes.

While the sheer number of storms has raised eyebrows in recent years, scientists have pointed out that climate change has a stronger influence on the severity of hurricanes, rather than their frequency. Models suggest that the total number of hurricanes may not change much in the future — but individual storms will grow stronger and the odds of major hurricanes will increase as the planet warms.

Research has found that tropical cyclones around the world already are growing more intense as the planet warms, a trend that’s projected to continue.

The Atlantic Ocean is an unusual case, though.

During the first half of the 20th century, strong air pollution over the Atlantic basin masked some of the effects of global warming. Certain types of aerosols have a cooling effect on the Earth’s atmosphere. Research suggests that the influence of this pollution had a dampening effect on hurricane activity for several decades.

During the latter half of the century, however, pollution sharply declined as Europe and North America implemented stronger air quality regulations. The Atlantic began to warm at a faster rate, and hurricane activity began to pick up.

That means some of the increase in Atlantic hurricane activity in recent decades can be attributed to declining air pollution alongside the influence of global warming.

Today, though, the significance of these two factors is shifting. Climate change, driven by greenhouse gas emissions, is becoming a more important influence than pollution regulations.

Studies have identified a number of ways climate change is affecting tropical cyclones. They’re not only growing more intense — they’re also migrating farther toward the poles, moving slower in some areas, including the United States, and rapidly intensifying more frequently.

Recent studies also have examined the influence of climate change specifically on some of the biggest and most damaging hurricanes in recent years. It’s a field of study known as “attribution science,” investigating the extent to which warming has worsened individual extreme weather events.

Research has found, for instance, that climate change increased both the likelihood and the intensity of Hurricane Harvey’s record-breaking rainfall in 2017, which caused catastrophic flooding along the Texas coastline. Scientists have found that climate change worsened the rainfall produced by Hurricane Maria, which devastated Puerto Rico and other parts of the Caribbean in 2017.

Reed himself led a 2020 study concluding that Hurricane Florence in 2018 also produced more rainfall than it would have in a world without climate change.

The new study, published yesterday in the journal Nature Communications, is among the first to examine the influence of climate change on a single, complete hurricane season. The unusually active season presented a prime opportunity for this kind of work, according to Reed — a slower season would have provided “a lot less storms to analyze.”

The researchers ran two types of simulations, one modeling the world as it exists today and another modeling a hypothetical world in which human-caused climate change doesn’t exist. It’s a standard procedure in attribution studies.

They found that climate change significantly increased the amount of rainfall produced by Atlantic storms in 2020.

Climate change has increased average sea surface temperatures in the Atlantic by about 0.4 to 0.9 degree Celsius, the study notes.

It’s yet another example of how climate change is reshaping the planet, Reed said. Changes in extreme weather events are some of the most obvious and immediately damaging symptoms of global warming. Hurricanes aren’t the only ones — wildfires, floods, droughts, heat waves and other severe weather events are all worsening around the world.

“Climate change is often thought of as a long-distance problem,” Reed said. “Sometimes the way it’s discussed is this challenge that’s gonna come to us in 50 to 70 years if we don’t start mitigating our emissions of greenhouse gases now. But in reality, climate change is here.”