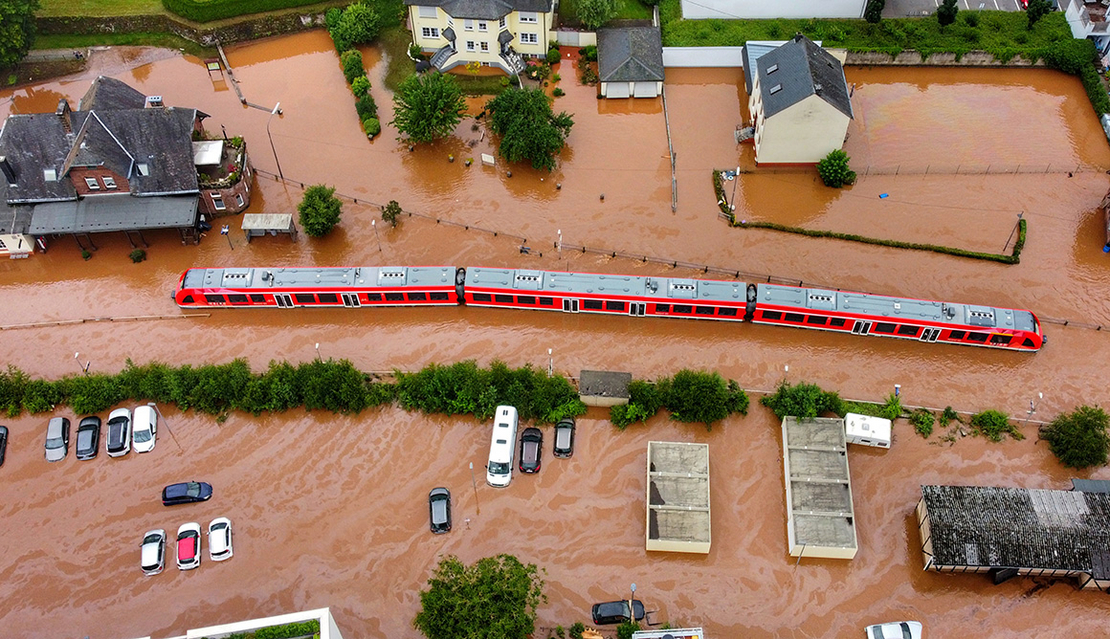 Climate change likely worsened the extreme rainfall and catastrophic flooding that swept across Europe last month by increasing downpour intensity between 3% and 19%, according to a study released today.

The odds of such an event happening were 1.2 to nine times more likely today than they would have been without human-caused warming.

The floods began with a slow-moving storm system that dropped heavy rainfall on Germany, Belgium, Luxembourg, the Netherlands and surrounding countries between July 12 and 15. Floodwaters ripped through the North Rhine-Westphalia and Rhineland-Palatinate regions in Germany and tore down the Meuse River, killing more than 200 people in Germany and Belgium.

German officials declared it one of the worst natural disasters in the country’s history.

“The extreme precipitation overtopped almost everything we knew in that region before,” said Enno Nilson, a scientist at the German Federal Institute of Hydrology, speaking at a press briefing yesterday.

As the event unfolded, scientists were already pointing out likely links to rising temperatures. Climate models indicate in many parts of the world, including much of Europe, that the warming atmosphere makes extreme rainfall events more intense. These downpours can increase the odds of flash floods.

Today’s study is the first time that this summer’s rains have been formally connected to climate change.

“This event demonstrates once again in 2021 that extremes breaking observed records by far, exacerbated by climate change, can strike anywhere, induce huge damages and cause fatalities,” said Frank Kreienkamp, head of the German weather service’s regional climate office in Potsdam, in a statement. “Western Europe’s local and national authorities need to be aware of the increasing risks from extreme precipitation to be better prepared for potential future events.”

The study presents the latest findings from World Weather Attribution, a research consortium focusing on the links between climate change and extreme weather events. Earlier this summer, WWA found that a record-shattering heat wave in the Pacific Northwest would have been “virtually impossible” without the influence of climate change (Climatewire, July 8).

WWA has also analyzed events ranging from droughts to hurricanes.

These attribution studies typically use models to compare simulations of both the real world, which includes the influence of climate change, and a hypothetical world in which human-caused warming doesn’t exist. These comparisons can tell scientists how climate change has affected the likelihood or the severity of a given weather event.

In this case, scientists focused on rainfall rather than flood levels. That’s mainly because of data issues, according to Nilson. Monitoring systems on the rivers were damaged by the rushing waters in some places, meaning measurements of the floods themselves are fragmented.

There also aren’t long-term records for all the river catchments in the region. Some records go back only 40 or 50 years, making it difficult to evaluate the odds of the recent flooding in a historical context.

So the scientists decided to focus on the root cause of the floods instead, examining one- and two-day rainfall rates across the region. Rainfall is comparatively simpler to evaluate, with more reliable records.

They also expanded their study site beyond the worst flood zones by looking at a large region extending from north of the Alps to the Netherlands.

Within this region, they found that the likelihood of such an event in the current climate probably occurs around once every 400 years. Climate change has increased both the likelihood and the severity of this kind of rainfall.

Such events may be made worse with a little more warming, the study finds. If global temperatures rise 2 degrees Celsius above their preindustrial levels — that’s nearly a degree Celsius warmer than they are today — the intensity of the rains would increase by another 0.8% to 6%, and the likelihood of the event happening would rise by a factor of 1.2 to 1.4.

The findings support the conclusions of a major new U.N. climate report, published earlier this month by the Intergovernmental Panel on Climate Change. The much-awaited report, which presents the latest science on climate impacts around the world, suggests that much of Western and central Europe will be exposed to increased extreme rainfall and flooding events.