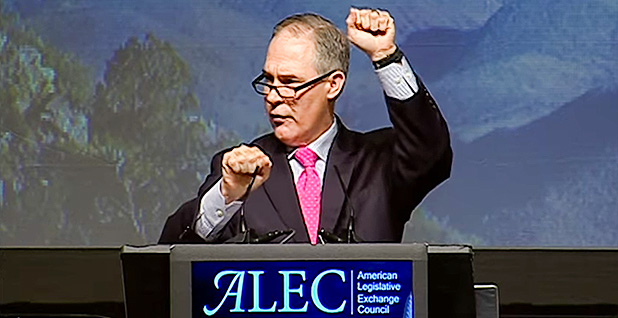 Members of the American Legislative Exchange Council, a heavyweight conservative policy organization, are feuding about their approach to climate change.

ALEC’s conservative wing says the organization — which convenes corporations, think tanks and legislators — is capitulating to left-of-center interests to regain funders after an exodus of corporate titans like Google LLC and Royal Dutch Shell PLC over the organization’s climate change positions. Others, however, contend that the conversation on climate has shifted away from hard-liners, with a growing number of Republicans and conservatives embracing clean technology and climate science, according to several of the group’s members.

"I think the attention they got on energy and environmental issues was so intense that that’s where they focused on their outreach with the center-left," said Paul Blair, director of strategic initiatives with Americans for Tax Reform and a member of ALEC. "You can’t pass the laugh test with going center-left on tax issues. To me, you can’t pass the laugh test with me by going center-left on energy and environment issues. But they apparently think they can."

It’s a fight that reflects the broader conservative debate over climate change and the direction of the Republican Party during the Trump administration.

And it will soon come to a head, as ALEC members prepare to vote on a measure that takes aim at U.S. EPA’s endangerment finding on greenhouse gases. The Obama-era finding is a compilation of scientific evidence that forms the legal basis for EPA greenhouse gas regulations. It’s despised by many conservatives.

ALEC’s Energy, Environment and Agriculture Task Force is slated to vote on a draft resolution at a meeting in Nashville, Tenn., next month that calls "upon the Environmental Protection Agency to withdraw the 2009 endangerment finding for carbon dioxide and other greenhouse gases and conduct a new rulemaking on this issue."

If ALEC ultimately adopts the resolution, it will serve as a model resolution for state and federal lawmakers to express their disdain for the EPA finding. The vote will put big businesses and trade groups that sit on the ALEC task force on the spot regarding whether the endangerment finding is worth investigating.

"Robust debate comes from stakeholders engaging from a variety of perspectives. And that is precisely what’s happening here," said ALEC spokesman Bill Meierling. He noted that the draft resolution could be amended or changed when the task force meets in Nashville.

The tug of war at ALEC mirrors the fight between voices skeptical of mainstream climate science — like the nonprofit Heartland Institute — and groups that are more moderate on climate change, like the U.S. Chamber of Commerce.

Heartland is rumored to be behind the endangerment resolution, with former North Dakota state Rep. Bette Grande (R) — who now freelances for Heartland and participates in ALEC matters — thought to have drafted it and handed off the language to a state lawmaker and ALEC member.

Heartland did not respond to a request for comment.

Heartland and its allies have pushed EPA Administrator Scott Pruitt to take on the endangerment finding, which the EPA chief has been reluctant to pursue. Corporate America, meanwhile, largely supported staying in the Paris climate agreement and retaining the Clean Power Plan — an Obama administration rule to curb power plant emissions — but ultimately lost those battles to far-right groups, though some hope Trump will ultimately remain in the global climate pact.

The endangerment finding vote may serve as a bellwether for where ALEC stands on climate change.

Is ALEC part and parcel of a conservative movement that has questioned climate change and the policy responses to it? Or does it operate among the wider atmosphere of reputation-conscious corporations and even some moderates who have opposed the Trump administration on climate change?

But that calculation also belies a more fundamental point about ALEC — while it has a reputation as a far-right group advancing industry interests, it’s also a member-driven organization. If ALEC is shifting on climate and energy, it’s largely because its members have, too.

"If there were some grand conspiracy, I’d know about it, and there isn’t," said Eli Lehrer, president of the free-market think tank R Street Institute, which supports a carbon tax. "To the extent things have changed, it’s because opinions have changed."

At its core, ALEC is an organization about free markets and limited government. Thus, its members also have railed against and helped craft bills to roll back President Obama’s climate and environmental measures, many of which were federal regulations, and local incentives for clean energy. At the same time, though, the group has come under fire for taking cash from fossil fuel companies threatened by the advance of clean energy while often neglecting to mention subsidies and incentives that legacy energy sources enjoy.

Longtime ALEC watchdogs view the endangerment finding draft resolution as an attempt by its conservative members to reorient the organization to its roots after several rudderless years on energy and environment matters. Part of that is a response to the Trump administration, said Nick Surgey, director of Documented, an organization that tracks the influence of corporations on public policy.

"This is a reflection of an organization that has shifted itself more into the mainstream of climate change in terms of rhetoric in the last three to four years," Surgey said. "Now they’ve got almost everything they want from Scott Pruitt and the EPA, and they have to justify their existence to their funders. And it seems like they’re allying themselves with the more radical of the funders."

The cohesion between ALEC and the Trump administration is evident to ALEC CEO Lisa Nelson. She sent a congratulatory email to its members on Jan. 30 to celebrate the new administration, saying, "This administration does have the potential to be an ALEC administration. It is full of the people and ideas we’ve advanced since 1973."

But conservatives familiar with ALEC said they’re concerned that the organization has gravitated to satisfying interests that aren’t committed to the free-market principles upon which the group was created. They said that dynamic is most apparent in the energy and environment space.

"When it comes to the policies of the organization, ALEC does have strong positions on issues that are consistent with the free market," Blair said. "The issue is if they are planning to upend those principles to fundraise in the future."

They worry that ALEC is trying to plug a funding gap following the high-profile exits of Google, BP PLC, Enterprise Rent-A-Car, Royal Dutch Shell PLC and others, all of which blamed the organization’s stance on climate change for their departure. Those companies left largely over pressure from shareholders who were spurred into action after activist groups harped on ALEC funding streams. The conservative billionaire industrialist Koch brothers are big donors; Exxon Mobil Corp., a member of the Energy, Environment and Agriculture Task Force, is also a major funder.

ALEC’s conservative members saw warning signs recently when feathers were ruffled over what they said in the past would have been a fairly easy decision.

The energy task force couldn’t agree to move on a resolution that opposed property assessed clean energy, or PACE — a financing mechanism to fund clean energy or energy efficiency upgrades. Conservatives were worried about exposing taxpayers to losses, since municipal bonds underwrote many of the projects.

But many of ALEC’s members also have PACE interests. One conservative source said those groups backing PACE angled to kill the resolution and criticized ALEC for trying to appease such funders. Rockwood Group CEO Scott Zajac, whose investment firm operates in the PACE world, was particularly vocal in opposing the resolution within ALEC, the source said.

Others, though, noted that’s just how the energy space is these days — corporations are on board with clean energy. Rejecting mainstream climate science or trying to stymie growth of energy sources that compete with ALEC’s old guard of coal, natural gas and oil companies doesn’t fly anymore.

The PACE resolution foundered over much acrimony in ALEC’s July meeting and was forbidden to ever return as a discussion point. That result has generated revolt from some of the more dogmatic conservatives.

"I’m concerned that there has been an effort more recently to try and table what in the past would have been considered straightforward proposals based on free-market principles," said Tom Pyle, president of the conservative energy think tank Institute for Energy Research. "That’s what ALEC is supposed to be advancing."

That effort, though, is minor compared with the endangerment finding, which is a lightning rod in climate policy circles.

Publicly traded companies on the Energy, Environment and Agriculture Task Force are getting calls about the upcoming vote on the draft endangerment finding resolution, according to a source familiar with the situation. Companies on that task force include Exxon Mobil, Pfizer Inc. and United Parcel Service Inc.

"We have not received calls on it to my knowledge, but either way it is not an issue we would support," UPS spokeswoman Kara Ross said in an email. "As one of the leaders in sustainable and transparent logistics, our position on climate change is clear."

E&E News contacted all those members. EEI, AGA, AFPM, Pfizer and Exxon Mobil did not respond to requests for comment. NRECA said it didn’t want to challenge the endangerment finding because it supports "inside the fence" carbon emissions regulations on power plants to replace the Clean Power Plan, which Pruitt formally moved to repeal last month.

"Challenging the endangerment finding would lead to a different result, which we think would be unwise," spokesman Dan Riedinger said in an email.