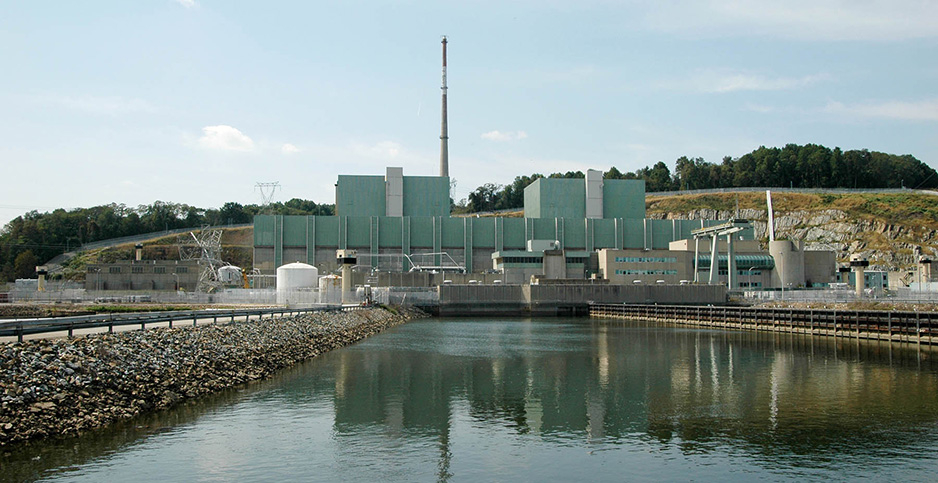 PEACH BOTTOM, Pa. — As younger nuclear reactors across the Mid-Atlantic and Midwest are struggling to keep their own lights on amid a surge of cheap gas, one Pennsylvania plant is fighting a much more traditional source of extinction: old age.

Located in southeastern Pennsylvania near the Maryland border, the Peach Bottom Nuclear Generating Station wants to continue churning out electricity, much as it has done for the past 45 years.

To do so, its owner, Exelon Corp., needs to secure a federal license extension for its two reactors to enable the plant to operate out to 80 years. Without the extension, the plant will run up against a 60-year approval in 2033 and 2034, much like the nearly 100 other reactors across the country.

The Nuclear Regulatory Commission’s approval would represent an unprecedented length of time for a commercial plant to operate — a fact that has some critics warning about the public safety implications of an aging facility originally licensed to run for half that time.

Also looming large over the fate of the nearly 2,800-megawatt plant are growing climate implications.

Any meaningful national effort to curb the electric sector’s carbon emissions will likely need a lot of the carbon-free power produced by the existing nuclear fleet, already under economic attack from cheap natural gas, waning demand and cratering costs for renewables.

With limited new nuclear on the immediate horizon, some believe pushing the age of current reactors may be the needed bridge to a zero-carbon energy future.

"The carbon-free power produced from nuclear energy has already given us a head start on meeting these goals, and it’ll take active decisions to make sure these plants continue to run," said Ryan Fitzpatrick, deputy director of the center-left think tank Third Way’s Clean Energy Program.

"Whether these plants keep running is a decision based on economics and safety at individual reactors, but the 80-year relicensing is an important inflection point in that future," he added.

Of the United States’ 98 operating reactors, 84 have been licensed to operate up to 60 years, and more than a dozen more plants will likely seek similar federally approved life spans from the NRC.

Should these reactors not seek to operate longer, the nation is poised to see a wave of shutdowns over the next three decades that would offset any carbon emission gains.

Last year, Third Way released an analysis that found the United States would need nearly 13 years of renewable growth to get back to baseline emissions if two-thirds of the nation’s at-risk nuclear plants were to close prematurely, or before 60 years.

And according to a report from the Center for Climate and Energy Solutions last year, the 80-year push could be the needed juice to meet the carbon reduction needs.

"Critically, this would buy additional time to deploy new advanced reactors, other zero-emission electricity sources, and the necessary infrastructure (i.e., transmission and management systems) to meet the deep decarbonization challenge," the May 2018 report said.

Nuclear watchdogs counter that those carbon benefits should not outweigh the immediate safety evaluations, especially for plants facing old age and possible degradation.

"You can’t trade away the potential immediate impacts of safety deficits for climate change benefit," said Edwin Lyman, acting director of the Nuclear Safety Project with the Union of Concerned Scientists. "You have to maintain safety at the same time you mitigate climate change, so we don’t think standards should be lessened for these approvals just because we might need these plants."

Peach Bottom is at the forefront of a small group of aging reactors hoping to expand their life spans.

In addition to the Pennsylvania reactors, two other plants — Turkey Point in Florida and Surry in Virginia — are seeking the additional 20-year license renewal. Owners of the North Anna nuclear station in Virginia will likely submit a similar request in the future.

The NRC’s decision on Turkey Point will likely occur by the end of this year, and would represent the first 80-year operation license.

"We don’t know if we can go to 100 because we haven’t been in business that long," said Nuclear Energy Institute spokesman Matt Wald to a roundtable of reporters this month.

"But these plants still have a lot of life in them," he added, "and 80 years is clearly in sight."

Located upstream from the Conowingo Dam on the Susquehanna River, the Peach Bottom reactors may represent one of the best cases for the industry to advocate for the so-called subsequent license renewal to enable 80 years of operations.

Before a minor NRC citation last year stemming from a fit pin becoming dislodged and damaging a compressor in one of the four generators, the plant — outside of personnel issues — had operated without incident for nearly 15 years, Wald said.

The site has also made significant safety and efficiency investments.

The U.S. nuclear industry moved to boost safety protections after a magnitude 9 earthquake and tsunami slammed into the northeast coast of Japan in 2011, crippling reactors and triggering explosions along the coastline.

As part of that effort, the industry spent some $4 billion in building Diverse and Flexible Coping Strategies (FLEX) buildings. At Peach Bottom, those structures house three backup diesel generators, extra pumping equipment and construction-vehicle-sized plows, all meant to keep necessary operations running in case of an electricity failure.

"It says a lot of the things about nuclear power that is special and unique," said Patrick Navin, Peach Bottom site vice president. "Everyone wants to talk about those jobs [from the natural gas industry], but we are going to be losing a lot more than we are gaining."

Plant operations also provided some $1.5 million in local property taxes on top of a $84.6 million payroll. And the replacement of nuclear power in Pennsylvania with natural gas generation could undercut one of the leading state emitters’ efforts to cut carbon.

State lawmakers have grappled with ways to maintain the state’s nuclear fleet, with potential tax benefits listed as a policy solution to achieve that.

In order to drum up support for such a policy, the Bicameral Nuclear Energy Caucus in Harrisburg, Pa., put out a report highlighting the impacts of the loss of the state’s nuclear fleet, one of which focused on the carbon impact.

"If it were not for its nuclear power plants, Pennsylvania’s CO2 emissions would be an estimated 37 mmt [million metric tons] higher each year," the caucus’s report said. "The premature closure of any of the nuclear plants further perpetuates the loss of the reductions the state has achieved already."

A draft proposal leaked this week from the state’s Legislature would enable nuclear to qualify for state’s Alternative Energy Portfolio Standard, which could provide a needed economic lifeline should it move forward.

While Exelon’s push to relicense the plant was born out of economics and profitability, the NRC’s decision will be based on safety.

"Each power reactor is licensed based on a specific set of requirements, depending primarily on its design," the NRC said on its website related to the 80-year license renewal applications.

"The license renewal review process provides continued assurance that the current licensing basis will maintain an acceptable level of safety for the period of extended operation."

That process, NRC explained, is likely to include some so-called "aging management programs," to monitor certain "systems, structures, and components" that "may have been engineered on the basis of an expected 40-year service life."

But some groups have argued that the NRC should go further in its license requirements to ensure safety, especially as the industry faces a tough economic environment for nuclear, which could have trickle-down effects on plant age management.

The need to cut costs could clash with safety, some nuclear watchdog groups worry.

"It’s hard to say with a blanket statement, but I am concerned of these two tensions — the need to slash operating costs for aging plants where you expect maintenance and inspection costs could go up — that that is a potential issue that I’m not sure the NRC is grappling with appropriately," UCS’s Lyman said.

While the extra 20 years would give some certainty about the plant maintaining operations, it does not guarantee the plant will stay open, NEI’s Wald said.

Increased age will mean additional inspections. One costly repair at such an advanced age could mean a sudden shutdown.

To help research and development on some of those uncertainties with age management, the federal government in conjunction with the private sector has launched an R&D program within the Department of Energy’s Office of Nuclear Energy to study how to best manage aging nuclear plants to continue operations.

"This marks an important planned milestone in the history of commercial nuclear power operations in the U.S. — one that underscores the long-term dependability of these plant designs and the commitment to their long-term performance by the organizations that operate them," DOE said on the LWRS website, noting the 80-year license submittals.

In its conference report attached to the spending bill, appropriators noted the increase, saying "funding above the budget request is provided for this activity as a priority."

While DOE may help with research and development, the department’s inability to make progress on how to dispose of the nation’s commercial nuclear waste may undercut aging plants.

Peach Bottom has almost 100 canisters of spent nuclear fuel stored on-site on a slab of concrete carved into an adjacent hillside. Those bulking concrete containers represent some 40 years of electricity, and the pad has reached near capacity.

The plant’s operators need to construct a second pad to continue storing accumulating waste at the site. Once completed, the storage area should hold waste to cover 60 years of use — and most likely require a second build-out — should the plant go to 80 years.

But DOE has showed little signs of movement to break through the waste impasse plaguing Congress and executive branch.

And even if the agency were to find some solution with all parties on board, waste from sites across the country that have already been decommissioned is likely to take precedence.