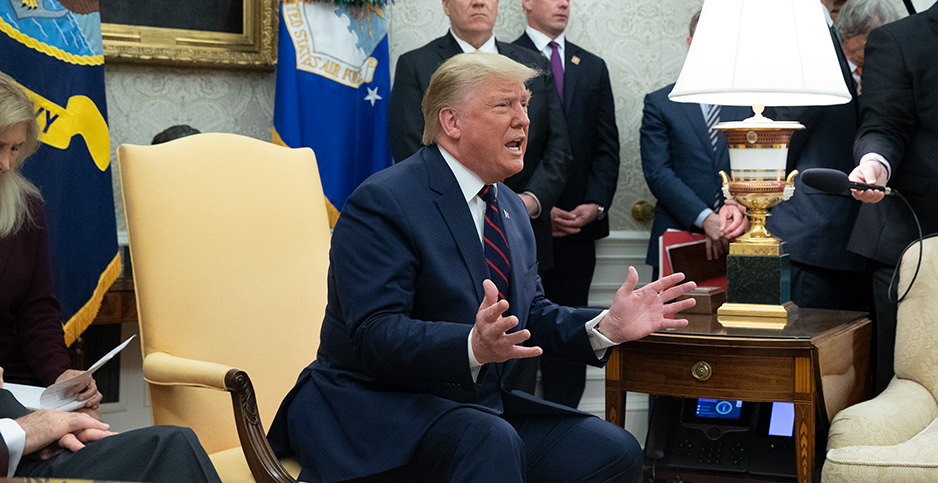 "Joe Biden has a tangled history of swampy dealings and Quid Pro Quo including pressuring for the removal of a Ukrainian prosecutor and letting his son Hunter piggyback off his diplomatic meetings," the RNC said.

The memo was part of a broader effort by President Trump, his personal lawyer Rudy Giuliani and their allies to frame the former vice president as corrupt. On a daily basis for weeks, Trump has repeated baseless claims that Biden pushed for the firing of a Ukrainian prosecutor to protect his son Hunter Biden, who served on the board of a Ukrainian gas company.

Projecting criticisms of one side onto the other is also a technique used frequently, and effectively, in climate denial, experts say.

Just as Trump tries to paint Joe Biden as corruptly engaging in quid pro quo, which is now a central thread of his own impeachment inquiry, to minimize his own actions, so do climate deniers try to paint climate scientists conducting peer-reviewed work as politically biased.

Trump is crafting a narrative around Biden related to corruption that will make it harder for his opponents to highlight the president’s potential misdeeds around his private business and using the levers of government to encourage a foreign country to investigate a political opponent, said John Cook, a professor at George Mason University’s Center for Climate Change Communication who researches climate denial techniques.

It’s also a technique, called projection, used by climate denial groups such as the Heartland Institute that attempt to inoculate a segment of the population to scientific facts of climate change by claiming the other side is politically biased, he said.

"A key characteristic of denial is projection, climate deniers do this all the time and will say climate scientists are politically biased, when in fact the opposite is the case when it’s the attackers of climate science that are politically biased," Cook said. "Projection is a way of neutralizing facts or institutions, they’re kind of getting ahead of what the criticisms of them would be, and Trump seems to be the greatest ever implementer of projection."

Trump’s and Giuliani’s claims, which selectively weave unrelated facts to create a false impression of corruption, stem from the work of the president of the Government Accountability Institute, which is largely funded by the Mercer Family Foundation, a primary backer of climate denial groups, public tax records show.

Much of the institute’s funding in recent years has come from the Mercer foundation, which provided about two-thirds of the group’s revenue between 2013 and 2017, public tax records show.

Rebekah Mercer, who uses her father’s fortune to fund climate denial groups such as the Heartland Institute, chairs the Government Accountability Institute’s board. Steve Bannon, the former top Trump aide, was a co-founder. The Mercers were also top funders to Trump’s election campaign in 2016, backing him with more than $15 million, according to the Center for Responsive Politics.

To craft the Biden corruption narrative, Trump allies have seized upon claims in a book published last year by Peter Schweizer, president of the Government Accountability Institute, called "Secret Empires: How the American Political Class Hides Corruption and Enriches Family and Friends."

Now, Biden is fending off frequent inquiries on the campaign trail into his son’s actions. At Tuesday night’s Democratic debate, he was asked why his son’s appointment to a Ukrainian natural gas company at a time when Biden was seeking to reform the country’s rampant corruption was appropriate.

The Ukraine conspiracy shows how groups backed by the Mercers that have effectively "monkey-wrenched" climate policy discussions have successfully reached into presidential campaigns, said Kert Davies, executive director of the Climate Investigations Center.

"To discover that the same funders propagating funding and misinformation around Biden or around [Hillary] Clinton are also funding misinformation around climate change is no surprise, but it certainly begs the question, what are they trying to get done here?" Davies said. "They’re doing pretty effective work, but it’s damaging work to the news and to science and everything that is real."

The Mercer Family Foundation didn’t respond to a request for comment on this story.

The RNC sent its September memo attacking Biden based on a narrative crafted by Schweizer, who is also an editor at the pro-Trump and Mercer-funded Breitbart News Network. Schweizer’s book highlights the work of Hunter Biden in Ukraine and China and connects it to unrelated actions by Joe Biden that misleadingly portray the former vice president as being engaged in corruption.

The book has provided much of the fodder that Giuliani and other Trump allies have been pushing for months. Giuliani started looking in Ukraine to dig for dirt on Biden just months after Schweizer published the book.

Giuliani cites findings from the book during his almost daily cable news appearances and has now moved beyond Ukraine to accuse the Bidens of corruption in China, where Hunter Biden served on the board of a Chinese investment fund. Giuliani’s tweets and public comments often read like a greatest hits of nuggets from Schweizer’s work, layering one conspiracy theory on top of another.

"Biden’s family has been selling his offices for 5 decades. From doing business with sleazy little crooks, Ukrainian organized crime, Whitey Bulger’s nephew, the Chinese government, to a Madoff type, and lots more. All covered up by Corrupt Media!" Giuliani tweeted last week.

There is no public evidence that Joe Biden or his son engaged in any criminal activity in the deal, and Trump’s own children have profited from favorable decisions by foreign nations as well as domestic companies during his presidency. However, the Trump campaign has leaned into the Biden-corruption narrative, spending more than $10 million on misleading ads to push the narrative that Schweizer lays out in his book.

Trump has referenced the allegations that have sprung from the book almost every day as he fights against the impeachment inquiry now taking place in the House.

"So pathetic to see Sleepy Joe Biden, who with his son, Hunter, and to the detriment of the American Taxpayer, has ripped off at least two countries for millions of dollars, calling for my impeachment — and I did nothing wrong," Trump tweeted recently.

The Mercer family and Koch-linked groups are responsible for promoting much of today’s climate denialism. They are the primary funders of the Heartland Institute, which exists to muddy climate science and have given money to groups like the CO2 Coalition, which has been briefing members of Congress with talking points that attack established climate science.

The Joe Biden campaign recently sent a memo to media outlets demanding that they not repeat the "debunked conspiracy theory" that "Trump and Giuliani have tried to manipulate the media into repeating."

In terms of political plays, the reliance on a Schweizer book that has been widely criticized for being misleading looks familiar.

In 2015, Schweizer authored "Clinton Cash: The Untold Story of How and Why Foreign Governments and Businesses Helped Make Bill and Hillary Rich," which introduced many to the "Uranium One" conspiracy theory that falsely portrayed Hillary Clinton as profiting from a uranium deal in Russia. It was turned into a documentary by Bannon, and Trump repeated the book’s misleading narrative while campaigning, calling that the "real" Russian scandal, not the country’s election meddling to his benefit. Public polls showed that the technique worked, as Democratic presidential candidate Clinton’s trustworthiness sank.

Research has shown that introducing an audience to legitimate climate information and climate denial disinformation means that they will cancel each other out, said Cook, the George Mason researcher.

"It’s eroding trust in the science, or the facts if it’s not a scientific issue, and eroding trust in institutions," he said. "When people are exposed to misinformation, not only does it cause them to believe wrong things, it can make them stop engaging with facts and also distrust the institutions."