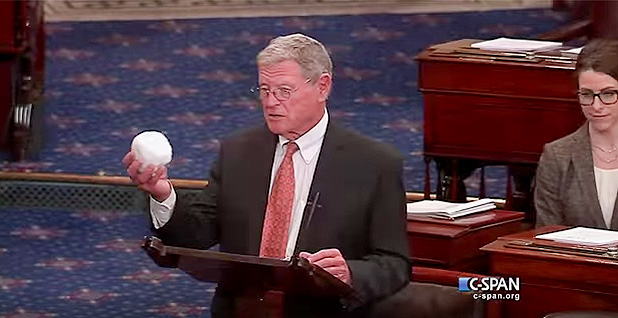 Sen. James Inhofe (R-Okla.), who brought a snowball to the Senate floor last year to disprove the existence of climate change, was the keynote speaker at a major climate conference in Washington yesterday. Photo courtesy of C-SPAN.

It’s a new dawn for climate skepticism, denial and doubt.

And yesterday, at an event at the conservative Heritage Foundation headquarters in Washington, the side of the climate fight that has viewed the last eight years of increasingly aggressive environmental regulations as a setback laid out its plan of attack.

Finally, it said, the time has come to significantly shift climate science away from the place it has held during the Obama years. Speaker after speaker repeated the notion that they would now win over the American public and that a new war had begun against those who have essentially forced them underground and out of favor for almost a decade.

The crowd included advisers to President-elect Donald Trump, conservative pundits and energy industry lobbyists eager to shape the next four to eight years. The time has come, they said, to end the "alarmism" fueling climate research, where the prevailing scientific wisdom holds that human activity is warming the planet and irrevocably altering life on Earth.

Among the ideas raised by speakers: a fight to end "political" science at federal agencies; to go into college campuses with their climate denial research; to produce newspaper-like pamphlets that dispel much of modern climate science; to launch a social media campaign that will separate "truth from bullshit"; and, perhaps most sinister for environmentalists, to use U.S. EPA to generate educational materials for schoolchildren.

Sen. Jim Inhofe (R-Okla.), known for bringing a snowball onto the floor of the Senate as evidence that global warming was a hoax, recounted the time when his granddaughter came home from sixth grade and asked why he didn’t believe in climate change. She had been given materials from EPA at school, he said. Such curriculum will be one of his first targets, he said.

"A lot of you guys that are liberals like the idea of the EPA brainwashing our kids, but I don’t, and so that’s going to be one of my targets to stop that from taking place," Inhofe told reporters, adding that climate science "is still something that is unsettled and is up for debate, but nonetheless it’s something that a small group of people with one philosophy shouldn’t be brainwashing my grandkids with."

As the crowd mingled between speakers, in a room with a clear view of the Washington Monument, they could be overheard laughing about the failures of environmental groups, about the energy boom ahead and about the dark days faced by their industry under President Obama.

Rep. Pete Olson (R-Texas), a member of the House Energy and Commerce Committee, wished the group a "Merry Christmas" when he talked about the rollback of regulations that have hamstrung the energy industry that he expects to begin shortly after Trump takes office next month.

At a break, attendees dined on a boxed lunch from Chick-fil-A, the fast-food chain known for supporting conservative causes. Marc Morano, who runs the Climate Depot website that is a clearing house for those who reject mainstream climate science, posed for a selfie with Inhofe. Myron Ebell, the climate skeptic with the Competitive Enterprise Institute who is helping the Trump administration shape EPA, chatted with the crowd as industry representatives pulled him aside every few steps to whisper advice in his ear. Kathleen Hartnett White of the Texas Public Policy Foundation, who lost out on the Trump EPA job to Oklahoma Attorney General Scott Pruitt, signed copies of her new book promoting the use of fossil fuel.

On Wednesday, there was hardly any environmental group that did not issue a statement slamming Trump’s appointment of Pruitt. Yesterday, at the Heritage event, the crowd repeatedly cheered Pruitt’s appointment, seeing it as the beginning of an expansion into fossil fuel use and a shift away from Obama’s environmental regulations.

Rep. Lamar Smith (R-Texas), chairman of the House Science, Space and Technology Committee, said he agreed with the Trump administration’s proposal to strip NASA of some of its climate research and shift it to other agencies.

Smith said he did not want "politically correct science or science fiction" from federal agencies. He said he would seek guidance from the Trump administration on whether to cut some federal science funding but allowed that he thought there was overlap between federal agencies. He said he wanted more funding for research and development for technology involving all forms of energy, presumably a shift from the Obama administration’s focus on renewable energy.

"I think there is a lot of duplication, and I think a lot of it is misspent, and so I’d like to see it better spent," he said. "I’d like to see more money put into research and development of energy sources to reduce the costs across the board."

Willie Soon: They put a ‘yellow star’ on me

Smith also promised to finally get the climate data he said the Obama administration has used to craft policy, which he has been seeking for years. He vowed to push his "Secret Science Reform Act" bill that would prevent EPA from proposing or finalizing regulation unless it was based on transparent data.

The coming climate science battle will also involve PowerPoints. Those who have doubts about whether humans are causing the planet to warm must develop bullet points of information easily digestible for public consumption to counteract the current climate science, the type that the average person can understand, said Corbin Robertson, a principal of Quintana Minerals Corp. and a board member of the American Petroleum Institute. He said it was time for a broader outreach to counteract the notion that carbon dioxide from emissions was harming the planet.

Willie Soon, who has produced climate research that blames solar activity for global warming and whose work has been seized upon by skeptics as definitive evidence of its cause, was seen privately chatting with David Schnare, a member of the incoming administration’s EPA transition team. The crowd gave Soon a sympathetic ear, more than a year after a front-page story in The New York Times connected his work to fossil fuel interests.

Soon was among the speakers, and he litigated more than a decade’s worth of attacks on his work by climate scientists. Among his targets were the National Academy of Sciences, the American Geophysical Union and Pennsylvania State University climate professor Michael Mann.

Soon railed against those who he said put a "yellow star on his jacket" for his research.

"You have this dark cloud of censorship and intimidation; it has really inundated climate science for a long time now," he said. "And climate science as we know it has been dangerously corrupted by scientists, all these bullies of censorship, including the scientists, the scientific institutions, even the funding agencies continue to hide the science for their own gain. They must be stopped; hopefully, we can stop them."