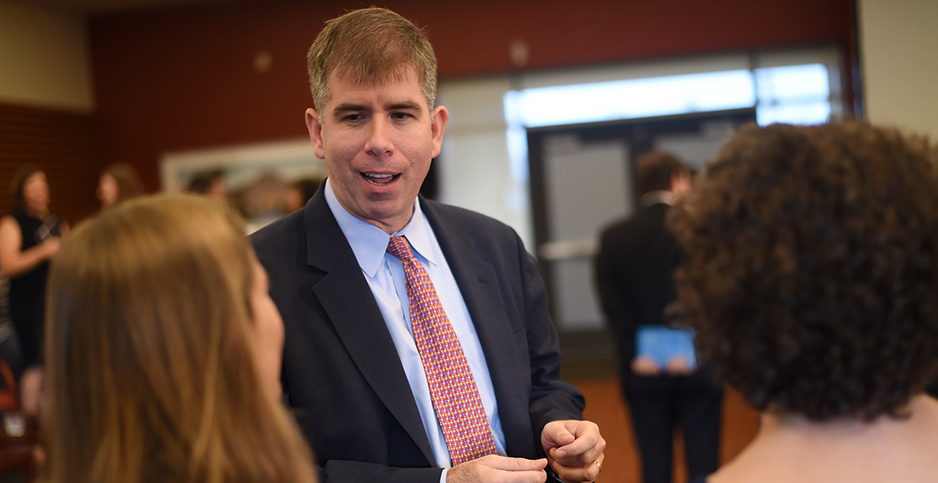 Jay Shambaugh is on President-elect Joe Biden's transition team for the White House Council of Economic Advisers. The Hamilton Project/Facebook

An economist who has studied the financial consequences of ignoring climate change was tapped this week by President-elect Joe Biden to help him pick who should serve on the next White House Council of Economic Advisers.

Jay Shambaugh, an economics professor at George Washington University, was named Monday to the team in charge of vetting applicants to the influential group. Shambaugh has warned that climate change would have a disproportionate effect on low-income communities.

As the name suggests, the White House Council of Economic Advisers helps the president develop financial policy. Shambaugh served as a member during the Obama administration.

Climate activists took it as a positive sign that Shambaugh was one of three people picked to work on the Biden transition team in charge of the White House Council of Economic Advisers.

The other two transition team members are Martha Gimbel of Schmidt Futures, the foundation established by former Google CEO Eric Schmidt; and Damon Jones, an economist at the University of Chicago’s Harris School of Public Policy and an expert in personal and public finance.

Shambaugh is a proponent of carbon pricing and infrastructure investment to address climate policy. He has cautioned that the more future temperatures rise, the worse the economic disasters will be. Along with a team of co-authors, he also has questioned whether the Paris climate agreement would be adequate to save the planet from some of the worst effects of climate change.

Shambaugh and a group of co-authors outlined in a paper the ways that climate change would have severe economic consequences for some regions of the country while disproportionately affecting low-income communities.

"The effects of climate change will not be shared evenly across the United States; places that are already struggling will tend to be hit the hardest," Shambaugh and his co-authors wrote in a joint report for the Hamilton Project at the Brookings Institution and the Stanford Institute for Economic Policy Research.

Developing an economic council that will focus on climate change is essential for decarbonization policies because it would allow the market to drive changes, said Adele Morris, policy director for climate and energy economics at the Brookings Institution.

It’s also significant that Biden views climate policy as a key to rebuilding the U.S. economy from the coronavirus pandemic, she added.

"Serious climate policy is economic policy, so you need to have your team engaged, because you’re trying to take a major sector of the U.S. economy, which is the energy sector, plus the other sectors that are highly emitting and you’re trying to reshape them," Morris said. "And anytime you do that, you’re making important choices about long-life capital investment, incentives and market forces and that kind of stuff."

Shambaugh is concerned with the economic cost of climate policy but not exclusively so because he recognizes that it hurts some people more than others, said Lawrence Goulder, a senior fellow at the Stanford Institute for Economic Policy Research and a co-author on research with Shambaugh.

He said Shambaugh has an approach to economics that weighs both social science and climate science.

"Some approaches to emissions reduction are much [more] costly than others; I think that Jay would want the Biden administration to take count of what types of regulation are most cost effective and what are less while at the same time recognizing other issues such as fairness and feasibility," he said.

Biden’s $2 trillion climate plan is centered around environmental justice and mitigating the effects of pollution and climate change in minority communities. That approach is mirrored in Shambaugh’s findings in the paper.

In particular, the southern United States would be hit hard economically by climate change, the authors found. More than 2 million homes in Florida, Louisiana, North Carolina, South Carolina and Texas could be underwater by 2100, they warned. Minority and low-income communities would face the most severe consequences.

Some climate solutions, such as fuel efficiency mandates, could be effective at mitigating climate effects, but they also come with steep economic costs. One of the most cost-effective economic tools could be carbon pricing, Shambaugh and his co-authors argued.

"Even at much higher levels, emissions pricing leads to environmental benefits reduced climate and other environmental damages that exceed the economic sacrifices involved (i.e., the expense of reducing emissions)," they wrote.

In other recent public statements, Shambaugh has argued that infrastructure spending is one of the surest ways to stabilize the economy while addressing climate change. That attitude, too, is echoed in Biden’s climate plan, which calls for significant investment into roads, bridges and other infrastructure, as well as a build-out of clean energy resources such as charging stations and transmission lines.

"The lifespan of infrastructure projects can extend across generations, and choices we make today will affect where people live, how they travel, and how resilient our economy is to a changing climate," Shambaugh and some co-authors wrote in an opinion piece for RealClearMarkets. "Accordingly, as policymakers consider the nation’s infrastructure needs and how best to meet them, the economic costs of climate change must be a chief concern."

Shambaugh’s work was cited this year by Sen. Elizabeth Warren (D-Mass.) as she has pushed the Securities and Exchange Commission to require companies to disclose their climate risks to investors. In a letter that cited Shambaugh’s climate research, Warren noted the SEC must "ensure that investors and the public have the tools and information they need to assess climate-related risks and make well informed investment decisions," or the economy could face undue harm.