Climate emergency and oil: What to watch 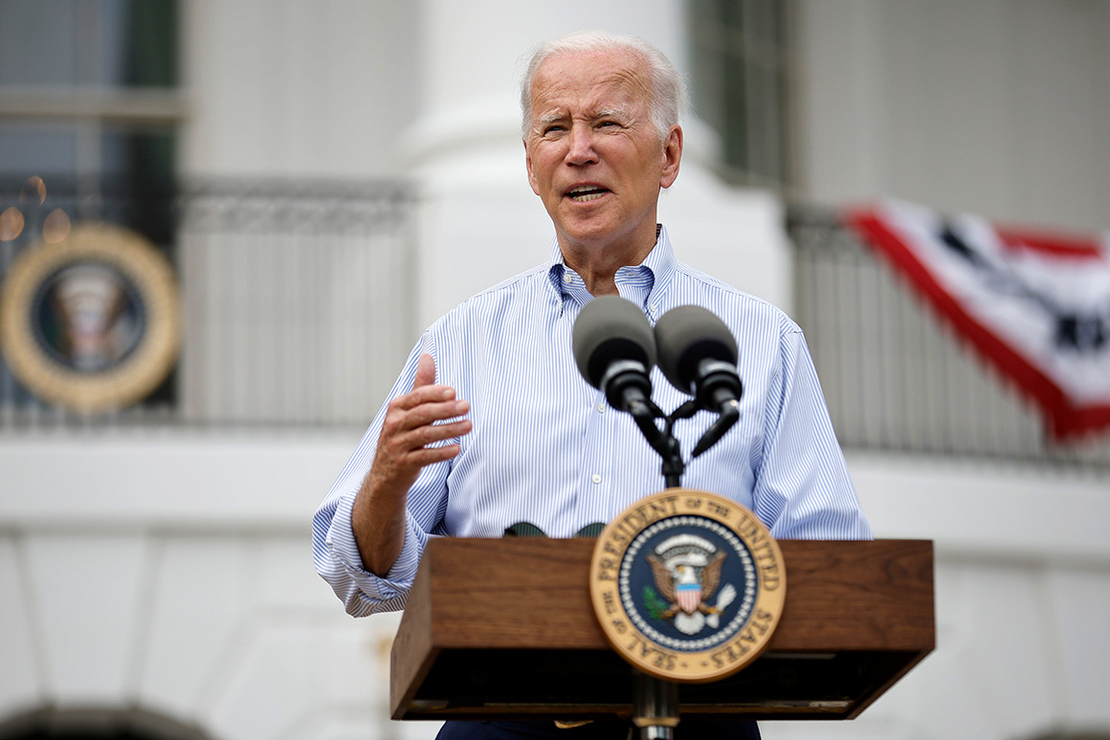 Gasoline prices continued to slide yesterday, but the decline did little to lessen the political pressure on the Biden administration, which has been urged to use emergency powers to act on climate change as legislative deals unravel.

President Joe Biden is expected to announce an executive action today on climate change, but one that stops short of a broad emergency declaration, White House press secretary Karine Jean-Pierre said yesterday. The idea of an emergency order is still “on the table” but unlikely to happen this week, she said.

“He’s not going to just stop with the actions of tomorrow,” said Jean-Pierre, referring to the president’s trip today to the Brayton Point Power Station, a closed coal plant, in Somerset, Mass.

In theory, a climate emergency would allow the president to take sweeping actions that would affect the energy sector, such as restricting drilling or new oil and gas leasing off the nation’s coasts — although such moves could be politically challenging at a time of high pump prices and could inspire lawsuits that ultimately gum up the administration’s long-term climate goals.

In the wake of stalled climate legislation on Capitol Hill due to opposition from Sen. Joe Manchin (D-W.Va.), environmental groups and congressional Democrats have been pressing the administration to use laws like the National Emergencies Act to speed up a shift away from fossil fuels.

But Biden is in a tight political spot, being pressured from the left to do more on climate while also pushing for more oil and gas supplies. The president has been blamed for high energy prices and inflation, even though the administration says price spikes were spurred by the war in Ukraine and the pandemic and are beyond its control.

Experts also warn that an emergency declaration may not offer Biden the suite of powers activists and progressives are hoping — as he could be hemmed in by courts or Congress should the GOP gain more seats as its predicted to do in upcoming elections.

Meanwhile, gasoline prices look to be turning down. The national average for unleaded gasoline fell to $4.495 a gallon yesterday, down roughly 10 percent from its all-time high of $5.016 a gallon on June 14, according to AAA.

The drop in gasoline prices, while welcome, still may not ease people’s worry about the economy, Patrick De Haan, head of petroleum analysis at GasBuddy, said in an email.

“It probably is somewhat helpful, but we may tip into recession either way, which could overtake the drop in prices as reason for concern,” he wrote.

Considering the political pressures, ClearView Energy Partners LLC said in a research note yesterday that “because many of the emissions-reducing interventions that might be enabled by Presidential emergency powers have potential to raise energy prices,” the move might not occur until after the November 8 midterm congressional elections, if it happens at all.

“If the President does pursue a pre-election climate emergency, it might have more to do with green buildout than fossil energy shutdowns [due to energy price concerns],” ClearView added.

The challenges facing Biden are apparent in his approval rating, which is negative in 44 states, according to polling released Monday by Morning Consult. Biden remains popular among self-described liberals, but fears of a recession were weighing on his approval among other voters, the polling shows.

Separate polling from the Pew Research Center this week said Americans are split almost evenly over Biden’s approach to climate, with 47 percent of U.S. adults saying the Biden administration’s climate change policies are moving the country in the wrong direction.

Climate policies proposed by the Biden administration have gone after demand for oil and gas — like the $300 billion in clean energy tax credits that were considered in recent talks on a miniature version of the failed “Build Back Better Act” — as well as supply, by restricting access to new leases on public lands. Additionally, the White House has put its muscle into building replacement power for when fossil fuels are retired from the nation’s electricity grid — rapidly permitting wind and solar on public lands and offshore.

But last week’s news that Manchin wouldn’t support climate spending measures in a reconciliation bill has increased calls for the Biden administration to use what powers he has even outside a climate emergency — over the federal oil and gas program, for example — to make more substantial gains on climate policy (Energywire, July 18).

Yesterday, leaders of the congressional progressive caucus inked a letter urging the president to cancel federal oil and gas leases already sold, then issue a five-year offshore oil plan with no new lease sales. Most bold of their requests: begin the process of retiring existing drilling of federal minerals.

“President Biden and Secretary Haaland still have the tools to uphold their commitments to monumental climate action, and that can start right now,” said Rep. Rashida Tlaib (D-Mich.) in a statement. “Nothing less than a livable planet is on the line, and now is the time to deliver on our promises.”

“This potential action from the administration appears to be more like a political emergency than smart policymaking for the American people.”

Energy historian Jay Hakes, who served as head of the Energy Information Administration during the Clinton administration, said groups urging the president to invoke emergency powers are misreading the political dynamics, in which a president has important limits on his power, and climate can hardly be considered a sudden emergency that needs a president to act unilaterally.

“Emergency powers would not be a very good bet for producing real results that would last,” he said.

Not only would a declaration spark additional political fighting, it could lead to litigation that the White House could very well lose: Both presidents Jimmy Carter and Gerald Ford tried to deal with the 1970s energy crises with executive actions — only to be thwarted by the courts and Congress, he said.

The Biden administration has already been checked by a federal judge for its temporary moratorium on oil and gas leasing last year, forcing it to resume sales on public lands, though it is fighting that injunction on appeal.

Kathleen Sgamma, president of the Western Energy Alliance in Denver, which has a lawsuit pending against the administration over its leasing ban, said a climate declaration used to hem in federal oil and gas would run into the same legal issues.

Lesley Jantarasami, managing director of the energy program at the Bipartisan Policy Center, said the administration got the ball moving on climate action when it took office. The infrastructure that passed last year included funding for climate mitigation and clean energy, and EPA is working on regulations to limit emissions of methane, which is a powerful climate-warming gas.

“The key going forward will be, ‘how do we make the long-term investments to decarbonize while ensuring energy security, affordability, and reliability,’ ” Jantarasami said in a statement. “Real progress on that front is going to require Congress.”

Granholm: ‘Our work is far from over’

Many analysts say that the administration has limited tools to cut high energy prices significantly, considering the global nature of the market.

Oil prices began rising last year as the economy recovered from the pandemic, and they pushed above $100 a barrel this year after Russia invaded Ukraine. Adding to the problem, oil and gas companies closed several refineries during the pandemic, which has also helped push up prices for gasoline and other fuels.

The Biden administration has responded with a series of steps aimed at getting more oil on the international market and lowering gasoline prices, including releasing oil from the Strategic Petroleum Reserve. Biden himself met last week with King Salman of Saudi Arabia and Crown Prince Mohammed bin Salman, though the visit didn’t result in a deal for immediate increases in the kingdom’s oil output.

The administration has tried to claim victory, pointing to the decline in prices even at the height of the summer driving season. Yesterday, Energy Secretary Jennifer Granholm said in a tweet that drivers are saving $25 a month because of the 50-cent drop in gasoline prices.

“Our work is far from over and because oil [and] gas are traded on a global market, there’s volatility that can’t be controlled by any one country,” Granholm said.