Climate emergency may be dead, but left keeps pushing 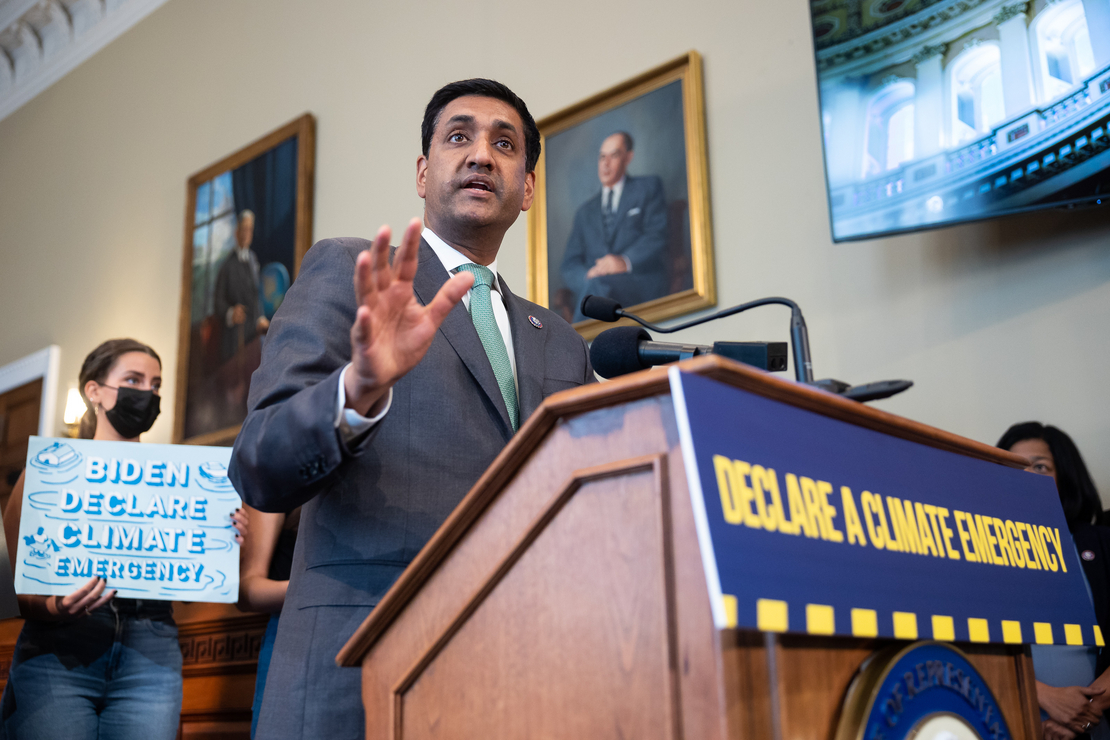 The Democrats’ revived climate spending bill may be the death knell for one long-sought goal of progressives: declaring a climate emergency.

Momentum had been building for President Joe Biden to declare such an emergency last month after it seemed Sen. Joe Manchin (D-W.Va.) had sunk, yet again, a budget reconciliation package that included major climate provisions.

In the moment, chances looked good. Climate envoy John Kerry had said that a formal emergency declaration was a matter of “when” not “if.” Biden told reporters he was personally mulling over the particulars.

As all this was happening, progressives gathered in the Capitol last week to push for Biden to make the declaration.

“It’s not just rhetorical,” Rep. Ro Khanna (D-Calif.) said last Wednesday. “It’s not just sending an emotional message that needs to be said. It is actually very practical. … Anyone who cares about American productivity should be for declaring a climate emergency.”

And then, later that day, Manchin announced he would support a slimmed-down package that included $369 billion in climate and energy provisions.

So for now, a declaration, which could unlock funds to invest in solar, wind, batteries and electric vehicles, has been put on the back burner.

But that doesn’t mean climate hawks in Congress are going to stop pushing.

Indeed, progressives and climate experts say a formal declaration will be necessary for the United States to meet its goal of cutting emissions in half by 2030.

Sen. Jeff Merkley (D-Ore.) said that “we need a full-court press” to save American homes and businesses from “an ever-worsening avalanche of climate disasters.”

He added, “The [‘Inflation Reduction Act’] is a hugely important step toward reducing our carbon pollution, and we should build on it to reach the goals President Biden laid out.”

As Khanna sees it, research shows market trends are expected to get the country to roughly a 30 percent emissions dip by the end of the decade. The reconciliation deal would get the country to a 40 percent drop — still shy of what is needed to stave off the cruelest heat, drought and weather throughout the world, according to experts.

“So where’s that other 10 percent going to come from?” Khanna asked E&E News in an interview yesterday. “The climate emergency [declaration] would give another tool so we can really get to that 50 percent, which is what the world needs to do — not just the United States — to prevent us from getting beyond 1.5 degrees [Celsius].”

Progressive groups like the Center for Biological Diversity are also still pressing the president to declare an emergency. Jean Su, senior attorney at the center, co-authored a guide that outlined the legal authorities the president could wield under a declaration. For instance, the National Emergencies Act would allow the president to suspend the operations of all offshore oil and gas leases.

The act would allow him to restrict U.S. fossil fuel exports that are primarily derived from the Permian Basin.

The Defense Production Act would allow him to marshal domestic industry to manufacture renewable energy and clean energy transportation technologies.

And the Stafford disaster relief act could allow him to direct FEMA to build renewable energy in partnership with environmental justice communities vulnerable to climate disasters.

‘Congress has heeded the call’

Declaring emergencies is nothing new. Every president for the past 46 years has declared at least one national emergency during their time in office, according to Su.

Trump did so for the Covid-19 pandemic. Biden also recently used the Defense Production Act to spur domestic production of solar panels and baby formula.

“President Biden can save lives and homes, create good-paying jobs and transform a punishing and racist energy system into a clean, regenerative one — all with the stroke of a pen,” Su wrote.

But when asked this week where the White House stands on the matter, an aide pointed to recent comments from press secretary Karine Jean-Pierre, who deflected on the question of a formal declaration.

She said Biden would act if Congress didn’t.

“But right now, we are glad to see that Congress has heeded the call” with the “most significant investment to climate change” in U.S. history. “He welcomes that.”

The reconciliation bill is still being hashed out in Congress, and the Senate hopes to pass the bill by week’s end, but its success is not assured.

Short of a climate emergency, experts said, there are actions on trade and oil leasing Biden could take.

“Even if you accept Manchin 100 percent at his word, it doesn’t get us to where we need to go,” said Bill Snape, senior counsel at the Center for Biological Diversity.