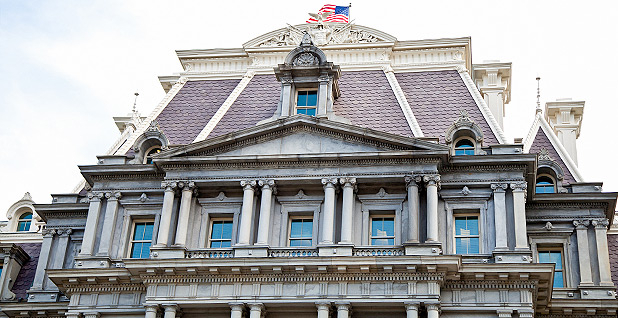 The Trump administration’s overhaul of the Office of Science and Technology Policy, documented in papers obtained through the Freedom of Information Act, also shows many high-level positions, such as a chief of staff, remain vacant. President Trump has yet to nominate a director.

Former OSTP Director John Holdren said in an interview the staffing "is a symptom" of the administration’s wider rollback of climate and energy initiatives.

All nine members of the former science division departed. Also up in the air is the President’s Council of Advisors on Science and Technology, which produced reports on advanced manufacturing, climate and other issues (Energywire, May 11). The current roster no longer shows an executive director of PCAST.

He said he was concerned that in case of a crisis — such as the recent Ebola epidemic — the administration wouldn’t be able to move fast enough in coordinating officials across agencies.

More broadly, he said, the lack of traditional OSTP leadership in guiding science and technology priorities in the federal budget was clear in the "crazy cuts" proposed by Trump’s Office of Management and Budget.

"OMB doesn’t have the science and technology expertise that OSTP does, so it’s a partnership. That partnership simply has not been functioning in this administration," he said.

Without top officials in place, OSTP also can’t be an important liaison to the scientific community and the critical "eyes and ears" of the president on science and technology issues, including in meetings with foreign nations, he said.

OSTP was created in 1976 to provide "scientific and technological analysis and judgment for the president." It’s not unprecedented for there to be a delay in nominating a director, although the Trump administration has delayed the process more than recent presidents.

Obama and Presidents Clinton and George H.W. Bush gave the director of OSTP a second title of "assistant to the president for science and technology," a dual appointment that advocates say is critical to keep science high on the president’s agenda.

Members of Congress and leaders of scientific organizations have sent a flurry of letters since Trump’s election saying a fully staffed office is needed to ensure science priorities are reflected in the federal budget and rulemaking (E&E Daily, April 24).

Critics of the office say Obama made it too political. The conservative Heritage Foundation said in a paper last year that OSTP’s mission could be served through appointed committees.

Holdren said OSTP could serve its basic functions with 50 or 60 people, if top positions are filled. But it wouldn’t be able to take on new initiatives, he said.

The Trump administration official said it’s likely OSTP will end up with "around 60" employees.

Although a nominee for director is coming "soon," two of the scientists considered for the position say they haven’t been in touch with the White House recently.

Yale University computer scientist David Gelernter said in an email this week that as far as he knew, "things haven’t moved since I last met with the relevant people in late spring." Gelernter met with the president in January,

"It’s a close call," depending on whether the nominee had expertise in other scientific areas that would be useful, he said.