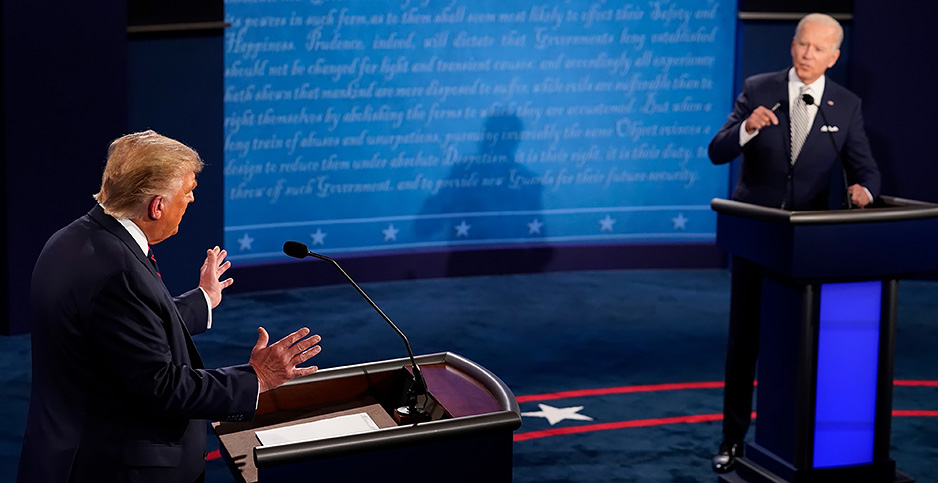 President Trump sought repeatedly last night to link Democrat Joe Biden to the Green New Deal and a $100 trillion price tag during an unexpected debate segment on climate change and the environment.

Moderator Chris Wallace of Fox News did not include any environmental subjects in the agenda released last week for the first debate of the 2020 general presidential election.

But the tense, rancorous event featured about 10 minutes of discussion about climate, energy and the environment after Wallace decided to ask a series of questions about those issues.

The climate segment featured less name-calling and interrupting than other portions, but it wasn’t entirely peaceful. Trump’s main goal appeared to be to link Biden to the Green New Deal.

"He’s talking about the Green New Deal," Trump said after Biden outlined portions of his climate plan, like decarbonizing the electricity sector by 2035 and incentivizing Brazil to stop deforestation.

"It’s $100 trillion," Trump said, a total that appears to be a rounding of the conservative American Action Forum’s 2019 estimate that the proposal would cost $93 trillion — a figure supporters disagree with.

"It’s the dumbest, most ridiculous — where airplanes are out of business. Where two-car systems are out," he continued, as Biden repeatedly said, "Not true."

"Where they want to take out the cows, too," Trump said.

Biden has spoken positively about the Green New Deal but stopped short of endorsing it. At the debate, he repeatedly said he doesn’t support the idea backed by progressives like Sen. Bernie Sanders (I-Vt.) and Rep. Alexandria Ocasio-Cortez (D-N.Y.).

The New York Democrat said, "Our differences are exactly why I joined Biden’s Climate Unity Task Force — so we could set aside our differences & figure out an aggressive climate plan to address the planetary crisis at our feet."

Senate Green New Deal sponsor Sen. Ed Markey (D-Mass.) said in a statement, "I support the Green New Deal and I’m voting for Vice President Joe Biden. Donald Trump is wrong. The progressive left is with Joe Biden, and we will pass a Green New Deal."

Wallace used the debate to dive into Trump’s environmental record, including questioning him on his positions on climate science and his rollbacks of climate policies.

Trump initially avoided saying directly whether he believed in climate change science, instead sticking to his long-standing clean air and clean water themes.

"I believe that we have to do everything we can to have immaculate air, immaculate water, and do whatever else we can that’s good," he said.

But pushed on whether human-caused greenhouse gas emissions are among factors that contribution to climate change, Trump seemed to give a little.

Trump defended his rollback of President Obama’s Clean Power Plan, which the administration replaced with the Affordable Clean Energy rule, by saying Obama’s action "was driving energy prices through the sky."

In fact, the Obama rule had not taken effect before Trump’s EPA started the process of undoing it in 2017, and the Obama administration forecast its benefits would far outweigh costs.

"What’s happening is the car is much less expensive, and it’s a much safer car, and you’re talking about a tiny difference. And then what would happen, because of the car, you would have at least double and triple the number of cars purchased. We have the old slugs out there that are 10, 12 years old. If you did that, the car would be safer, it would be much cheaper by $3,500," he said.

"A lot of people agree with me, many people," Trump continued. "The car has gotten so expensive, because they’ve got computers all over the place for an extra little bit of gasoline," he said, going onto say he supports electric vehicles, but California’s drive to decarbonize cars is "just crazy."

‘Dying in the suburbs’

Environmentalists had expected the debate to avoid climate and the environment completely, and had taken measures like advertising campaigns and petition drives to change Wallace’s mind (E&E News PM, Sept. 29).

Biden slipped a reference to climate change into an earlier answer, depicting climate impacts, along with COVID-19 as a bigger threat to suburbs than protests, as Trump had claimed.

Greens seemed pleased with how the event turned out.

"Vice President Biden proved what we’ve known since the start of this race: He will listen to scientists and experts, act to protect the country from the threats we face, make the largest-ever investment to combat climate change, address environmental injustice, and create 10 million good-paying jobs — that’s the leadership our country needs," Pete Maysmith, senior vice president of campaigns at the League of Conservation Voters Victory Fund, said in a statement.

"Trump tried to bully and lie his way out of his disastrous record on racial justice, climate change and democracy," he said.