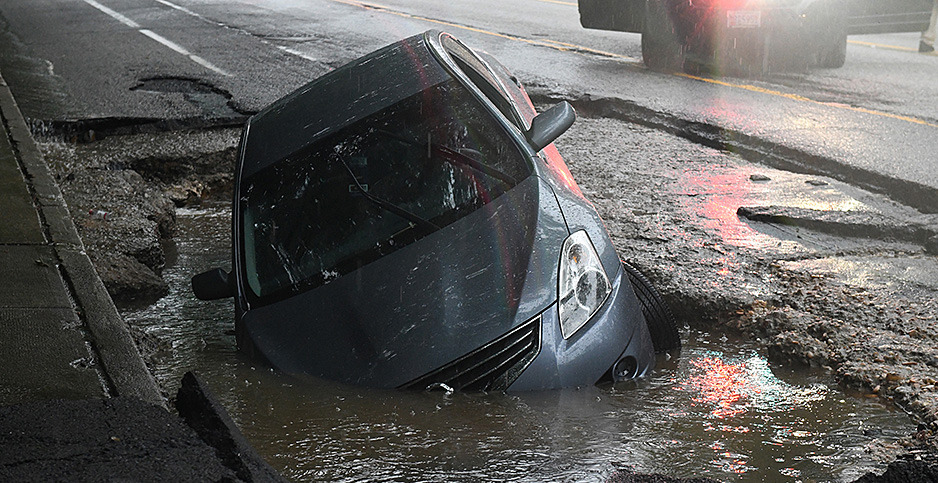 A car lies half-submerged in a Baltimore sinkhole caused by flash flooding in May 2018. Jerry Jackson/Baltimore Sun/TNS/Newscom

Attorneys for Big Oil and the city of Baltimore will square off next week in a Supreme Court battle that could change the trajectory of more than a dozen closely watched U.S. climate change lawsuits.

The nation’s highest bench will hear arguments Tuesday in BP PLC v. Mayor and City Council of Baltimore, a case that hinges on a hyper-technical question that has been raised in a number of challenges aiming to force oil companies to pay up for local climate impacts.

Experts say the outcome of the Supreme Court case could result in substantial delays to — or the derailment of — climate liability lawsuits filed by states, counties and cities across the country.

"They’re trying to get the court to get rid of all climate cases in this guise of deciding this very narrow technical issue concerning the reviewability of remand orders by appellate courts," said Robert Percival, director of the University of Maryland’s Environmental Law Program.

At issue in the Supreme Court fight is whether federal appeals court judges can review the entire scope of U.S. district court orders that toss climate cases back to the state benches where they were originally filed. Usually, once a case is thrown back to state court, the decision can’t be appealed unless the dispute deals with a limited set of issues such as civil rights claims or federal officer involvement.

The question in front of the Supreme Court is narrow, but oil and gas companies have also asked the justices to save time and rule that lawsuits like Baltimore’s seeking compensation for climate change should automatically land in federal court (Climatewire, Nov. 17, 2020).

Embattled oil supermajors like BP, Royal Dutch Shell PLC and Chevron Corp. have been fighting for years to keep climate liability cases in federal venues, where the challenges may face a greater chance of failure.

Since 2017, lawsuits filed by local and state officials in California, Rhode Island and other places have been locked in jurisdictional battles over whether the cases should remain in state court.

Industry attorneys argue that the challengers aim to reduce greenhouse gas emissions, which the companies say is a matter for federal courts and, ultimately, other branches of government to resolve.

"Judges, whether they [are] federal or state, are not really well positioned to be making energy policy decisions, and it’s something that Congress and the federal agencies should be dealing with," said Phil Goldberg, special counsel for the Manufacturers’ Accountability Project.

Challengers have countered that the cases aren’t at all about lowering emissions, but instead aim to crack down on industry misinformation about the effect fossil fuel production and consumption have had on global warming.

"It was also a concerted disinformation campaign to prevent us from doing something when we could have done it in a manner that would have been a lot less painful," said Karen Sokol, a law professor at Loyola University in New Orleans.

She added: "We’re dealing with a much more entrenched fossil fuel-based economy than we would have if we made a turn much earlier."

Although lawyers for BP and other companies have submitted a sweeping request to the justices, it remains to be seen whether the Supreme Court will take on the issue of whether all climate liability cases belong in federal court.

While it’s possible that the justices may side with Big Oil and allow federal appeals court judges to review entire remand orders, they are not as likely to be persuaded by industry’s broader argument, said Vermont Law School professor Pat Parenteau.

"Baltimore [does not] provide a vehicle for reviewing any of the other grounds for federal jurisdiction," Parenteau said in an email. The Supreme Court "has repeatedly said it is a court of review, not preview."

According to some legal scholars, oil companies are on shaky ground with their reliance on federal common law to snuff out climate liability cases simply because they are related to a phenomenon that is happening beyond states’ borders.

Sokol said that legal battles like Baltimore’s are grounded in state corporate misinformation and public nuisance law, which are within the purview of state judges.

"This argument is just so specious and would amount to something so much more momentous than this little technical question that they’re asking about federal removal," Sokol said. "[It] would be the potential for federal common law to preempt state common law claims, simply because they implicate activity that is national in scope."

The verdict is still out as to whether President Trump’s addition of Justice Amy Coney Barrett to the Supreme Court will hurt climate challengers.

Barrett, who was confirmed by the Senate in late October, stayed quiet about her climate views during her nomination hearing. What little she did say hinted at support for the idea that climate change is an issue for the legislative branch, not the judiciary, to address, said Sokol.

"Although she didn’t overtly say much, she said a lot when she said she had no firm views on climate change and she was not going to speak on a matter that was a policy question," Sokol said.

Climate advocates have called on Barrett to recuse herself from BP v. Baltimore, since her father worked for Shell Oil Co. Barrett recused herself from cases involving certain Shell entities while she was a judge on the 7th U.S. Circuit Court of Appeals.

"Given Justice Barrett’s deep family connections to Shell Oil, and prior recusals from Shell cases, she must do the right thing and recuse herself from this case," Richard Wiles, executive director of the Center for Climate Integrity, said in a statement this week.

The Supreme Court announced that it would hear the case just weeks before Barrett joined the bench (Greenwire, Oct. 2, 2020).

In its short order announcing the grant, the court noted that Justice Samuel Alito — who owns stock in ConocoPhillips and Phillips 66 Co., two companies involved in the case — had not taken part in considering the petition.

Although the Supreme Court is currently composed of mostly conservative justices, legal experts noted that jurists’ ideology does not always dictate how they will rule in cases.

Goldberg of the Manufacturers’ Accountability Project recalled that Barrett’s predecessor, the late Justice Ruth Bader Ginsburg, who was widely considered the leader of the Supreme Court’s liberal wing, authored the 2011 opinion in American Electric Power Co. v. Connecticut. The court ruled in that case that states and private entities cannot use federal public nuisance law to force reductions in carbon dioxide emissions from power plants.

Authority to slash emissions falls to EPA under the Clean Air Act, the court found.

"I don’t think the receptivity of the judiciary in the Supreme Court to this type of novel litigation is dependent on which judges were nominated by which parties," Goldberg said. "I would expect that they would view these cases the exact same way they did nine years ago, when Justice Ginsburg in the court unanimously dismissed" AEP.

The justices could also decide that federal courts have no business in matters of state law, said the University of Maryland’s Percival.

"If the court decided to go beyond the narrow technical removal issue and opine about climate litigation that’s brought in state court based on state tort theories," he said, "it would be kind of a breathtaking assertion of jurisdiction based on their ideological opposition to dealing with the climate issue."