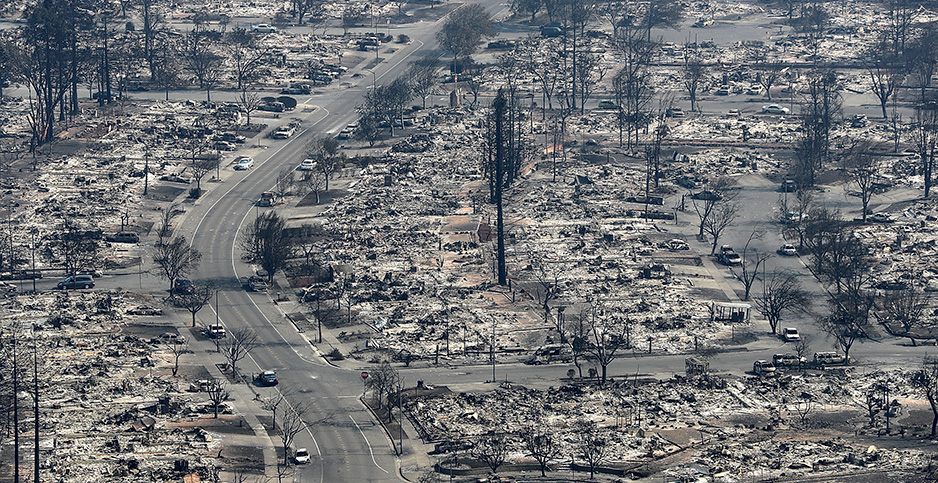 A large section of Santa Rosa, Calif., was destroyed by the Tubbs Fire in 2017. The federal government is helping Sonoma County build natural protections against wildfire. Justin Sullivan/Getty Images

A new federal climate mitigation program that targeted small, impoverished communities has fallen short of its equity goal and gave its largest single grant — $50 million — to a rich California city that is home to Facebook’s corporate headquarters.

Five of the nation’s richest states are getting 70% of the $500 million that FEMA is allocating for resilience projects against flooding, wildfires and other natural disasters.

Small, impoverished communities are getting $36 million in total, an E&E News analysis shows.

The grants are provided under FEMA’s new Building Resilient Infrastructure and Communities program, known as BRIC, which President Biden said in May would "help communities, including those too often overlooked."

"I am not surprised at all. I am exceptionally disappointed. But I don’t know why I’m disappointed, because I expected it to go this way," said Judson Freed, emergency management director in Ramsey County, Minn., who has lobbied for increased disaster funding for non-coastal areas.

"The center part of the United States is being ignored constantly, and we don’t seem to matter," Freed said.

FEMA officials defended the agency’s distribution of climate grants by saying the number of applications from small, impoverished communities grew from an average of 6% between 2005 and 2019 to 9.3% in 2020. Those grant applications went to the pre-disaster mitigation program, which preceded BRIC.

"FEMA is committed to delivering our programs with equity and we are encouraged to see the growth of sub applications from small and impoverished communities for FY20," David Maurstad, the agency’s deputy associate administrator for insurance and mitigation, said in a statement. "We look forward to continuing to see the numbers grow and supporting these communities with building capacity and capability. And while this is just the first year of the BRIC program, we will be persistent in our efforts to refine and improve the program through the lessons we learn and the feedback we receive from our stakeholders."

FEMA sought to help poorer areas by paying 90% of the cost of their BRIC-funded mitigation projects instead of the 75% reimbursement it’s giving to other grant recipients.

But FEMA offered the incentive only to communities meeting the federal definition of "small, impoverished" — those having up to 3,000 residents and an average per capita income that is up to 80% of the national average.

"The definition is very limited," Martín said, noting that other federal agencies use much broader criteria to get money to underserved communities.

Many advocates urged FEMA last year to broaden its effort to get BRIC funding to low-income and minority communities that have historically not sought or not received federal climate mitigation funding.

"It helps, but it’s not quite yet what we want to see in this country," Martín said of the BRIC money.

FEMA did not respond to a request for comment. In a statement announcing the grants, FEMA Administrator Deanne Criswell said, "We must continue to identify opportunities to combat the impacts of climate change and help our communities become more resilient against the threats of future disasters."

The largest single BRIC grant of $50 million is going to Menlo Park, Calif., for a flood protection project in an affluent stretch of Silicon Valley along the San Francisco Bay. Menlo Park’s median household income is $160,784.

The third-largest grant provides $36 million for a flood control project in northern New Jersey that will protect four residential communities whose average median household income is $73,373.

FEMA had to reject hundreds of funding requests because of the popularity of BRIC in its first year. The agency got nearly 1,000 applications seeking a total of $3.3 billion.

But states that have sustained some of the nation’s worst flood damage received relatively little.

The largest request that FEMA rejected was by Hidalgo County, Texas, which sought $115 million for flood control. Hidalgo County, on the Mexican border in southeastern Texas, is 93% Hispanic and has a 27% poverty rate.

The lopsided funding reflects a sort of winner-take-all approach.

While many federal grant programs take pains to allocate money evenly across the country, FEMA distributed most BRIC funding through a competition that allocated up to $50 million for a single project.

As a result, seven projects, including two in California and two in New Jersey, are receiving half of the $500 million that FEMA announced yesterday.

Martín of the Urban Institute said that some of the states receiving extensive BRIC funding "are focused on underserved populations" and have taken their own steps to mitigate disaster damage though smart development policies.

Freed, the emergency manager from Minnesota, said the BRIC program is "an outstandingly good concept" and that the winning projects "look to be the kind of projects BRIC should be paying for."

But Freed plans to raise his concern that funding too often goes to coastal states in a meeting with Criswell, the FEMA administrator, scheduled for July 12. Freed is president of the U.S. Council of the International Association of Emergency Managers but said he is commenting on the BRIC program as a local emergency manager.

"I will be bringing it up to the administrator," Freed said. "Going forward, this shouldn’t be the way it is."