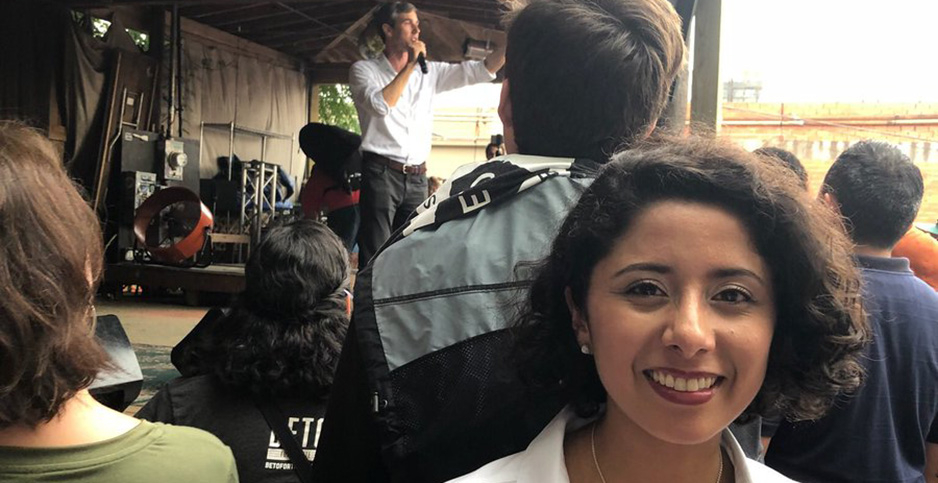 Lina Hidalgo and Rep. Beto O'Rourke (D) both spoke at an event in Texas in August. Hidalgo is now county judge-elect for Harris County, which is Texas' largest by population. @Lina4HC/Twitter

HOUSTON — An electoral tsunami swept through this flood-prone energy hub this month, carving a blue path for a climate-talking 27-year-old to become chief executive of Texas’ most populous county.

Lina Hidalgo will take over next year as county judge in Harris County, which is home to Houston. The Democrat, Colombia native and self-styled progressive beat Ed Emmett, a moderate Republican who sought to curb flooding but said climate change was out of his purview.

In public comments about her win, Hidalgo made a point of mentioning climate change, the pursuit of world-class public transportation and a desire to use the best data when preparing for another storm.

"As we rebuild from the last flood and we prepare for the next storm, we have to look out for every single person in our county," she said in remarks archived on YouTube.

The victory by Hidalgo is a remarkable moment for Harris County and a national effort to put more women in office. Critics have pointed to Hidalgo’s lack of experience, while backers see a person who brings a fresh perspective. Her campaign website gives a sense of priorities she may bring to a county where oil, natural gas, refining and pipeline companies loom large.

One entry says the county should provide incentives to curb the carbon footprint of the area. It also calls for a push to have renewable energy industries in the county. On flood control, Hidalgo’s listed goals include transparent development and planning standards and making a coastal protection project a priority. Hidalgo’s site includes a vision of natural areas acting as sponges and residents knowing whether they’re in an at-risk locations.

As a candidate, Hidalgo used an opinion piece to call Greater Houston "the poster child for the consequence of ignoring science." She described a lack of acknowledgement of a changing environment and "its man-made causes."

Emmett will exit county leadership not long after he helped persuade voters to approve a $2.5 billion bond referendum to help with flood mitigation (Greenwire, Aug. 27). The Houston region has seen a number of damaging rain events in recent years, including massive and deadly flooding in the wake of Hurricane Harvey in 2017. The region continues to seek funding for efforts to rebuild with more resilience.

Hidalgo wasn’t available for an interview with E&E News last week, but she said in a statement yesterday that addressing preparedness for hurricanes and floods is vital to protecting the economy.

"Residential communities and large petrochemical plants alike are vulnerable to the next big hurricane, and we must use the best science to protect them," Hidalgo said. "We’re also in a position to embrace new technologies and position our region as a leader in all forms of energy, including renewables."

A county judge here "could spend every waking minute" focused on flooding and never solve it, said Brandon Rottinghaus, a professor of political science at the University of Houston. Flood mitigation involves working around the inevitable growth of the city and county, he said.

Rottinghaus doesn’t think most people in the county look attentively to the county judge to discuss climate change. That doesn’t mean the topic will be off the radar for Hidalgo.

"I think for her political career that’s something that she will want to be connected to," Rottinghaus said, adding that climate change is a topic that would need to be tackled at a higher level of government.

Hidalgo’s campaign website says it took a hurricane, multiple floods and billions of dollars of damages "for the current leadership to prioritize flood control." She also has lamented that some residents weren’t informed in a timely way about water releases from reservoirs in the wake of Harvey.

The county judge-elect has a political science degree from Stanford University and spent time studying in a joint Harvard University-New York University program. She moved to the United States in 2005 and later became a U.S. citizen.

Hidalgo’s victory was stunning in that she has never held public office and will have a lead role in a county that’s the third-largest in the country by population. Harris County had over 4.65 million people as of July 1, 2017, according to a U.S. Census Bureau estimate.

But Emmett’s defeat wasn’t a total surprise given the success of Democrats in dozens of local races on Nov. 6. Unofficial election figures showed Hidalgo ahead of Emmett by fewer than 20,000 votes while a Libertarian candidate received over 24,000 votes. More than 1 million votes were cast in the race.

Support for Democratic Rep. Beto O’Rourke’s unsuccessful bid for the U.S. Senate and dislike for President Trump were major factors in Harris County, according to Mark Jones, a political science fellow at Rice University’s Baker Institute for Public Policy. And over three-quarters of county voters this election used a straight-ticket option, which was an advantage for Democrats.

Jones called Hidalgo an "afterthought" for many voters, but he said they did signal they wanted to see more Democratic officeholders. The straight-ticket option is set to end in Texas in 2020.

Emmett said Nov. 7 on Twitter that he was proud of his campaign while noting the role of straight-ticket voting. He declined E&E News’ request for an interview, according to his office.

People could select the Democratic ticket and still find Emmett on the ballot and vote for him, but that didn’t happen enough to allow him to win. He was appointed as county judge in 2007, and he remained by winning elections. Hidalgo’s win this year gives her a four-year term.

In a recent piece, Hidalgo said she was grateful to O’Rourke for inspiring young people. And she said divisiveness nationally turned off some voters in a county that has been "trending purple-to-blue."

But the judge-elect said her win "was made possible by the desire to make change and a team of wonderful people stepping up to make it happen." She noted efforts to get voters to support the entire Democratic ticket.

Houston Mayor Sylvester Turner, a former Democratic state lawmaker, met with Hidalgo after her election win. Houston’s government will continue to have a major role in shaping the future of the city, whose population the Census Bureau has pegged at more than 2.3 million.

The mayor will work with Hidalgo to advocate for flood mitigation projects as well as federal funding to help with storm recovery, according to Mary Benton, press secretary for Turner. Benton said Turner has a lot of respect for Emmett, who also is a former member of the Texas Legislature.

"I know Mayor Turner believes Judge Emmett’s background and expertise will be missed, but he also knows the work must and will continue," Benton said in an email.

Rice University’s Jones said it will be tougher to coordinate certain funding efforts given the loss of Emmett’s experience. The outgoing judge also has a relationship with other members of Commissioners Court, the county’s governing body.

At the same time, a Democrat is set to replace a Republican as county commissioner in Harris County’s Precinct 2. That will give Democrats a 3-2 majority at Commissioners Court in 2019, counting Hidalgo.

In Houston, Turner has sought ways to collaborate with the energy industry while saying climate change is real. The mayor also has discussed the city’s work on a climate action plan.

Adrian Shelley, director of the Texas office of Public Citizen, said Harris County should pursue a complementary inventory of greenhouse gas emissions and work toward goals for pollution reduction. That could include refineries and petrochemical plants as well as transportation.

Shelley also noted Hidalgo’s ability to help steer how Harris County proceeds with projects related to the $2.5 billion flood mitigation bond program and to discuss climate change by name while pointing to its effects.

"I think we have a real opportunity here," Shelley said. "It’s a pivotal time for the region."

But Jones said there’s little the county judge can do related to climate change, which he described as more of a federal and state issue. And if Hidalgo were to seek policies that draw opposition from the petrochemical industry, Jones said, the state may come in and try to cut local power.

In a statement, Todd Staples, president of the Texas Oil & Gas Association, said he looks forward to working with elected officials on "common-sense policies" that promote jobs and protect the environment.

"Our citizens’ quality of life, standard of living and pay-scale for our workforce are unmatched — all because of affordable and reliable energy supplies that are responsibly produced," Staples said.

Rottinghaus with the University of Houston said the region in large part depends on fossil fuels, but he said there are opportunities to take a broader view of energy use and sustainability.

Hidalgo will have to balance economic growth with a need to mitigate flooding, Rottinghaus said, and going too far in any one direction could meet serious resistance.

There may be a nod toward "limiting development and growth in certain kinds of areas, but it’s hard to do that," he said.

Jones said there’s no reason to automatically think Hidalgo "is going to be successful in a very difficult job," though he didn’t rule it out. Erica Grieder, a Houston Chronicle columnist, argued in a recent piece that Hidalgo already earned the confidence of some voters and that Emmett’s backers "should give her the chance to earn theirs after she’s sworn in."

Hidalgo had a message for her followers on Twitter on Tuesday.

"Next time around, don’t just vote," she said. "Be the person people are voting for!"