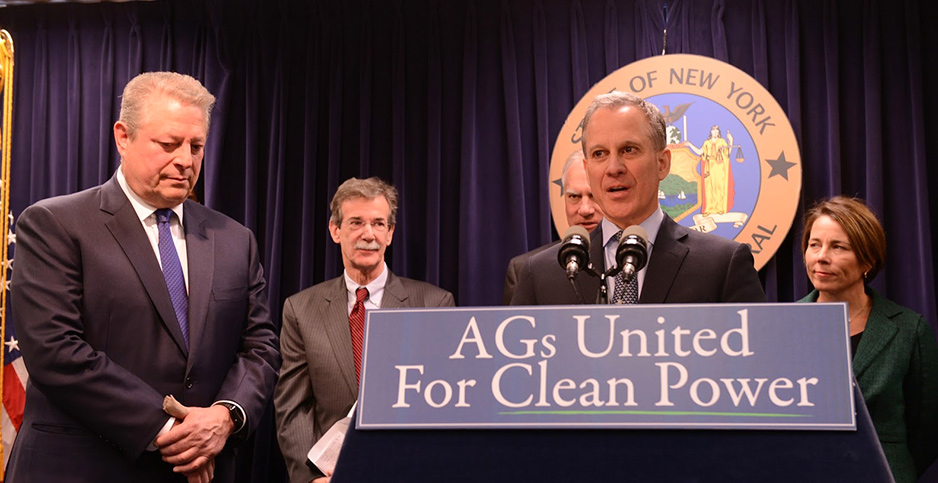 Schneiderman is also a pugnacious and media-savvy figure whose abrupt and stunning political fall this week after cringe-worthy sexual abuse allegations is an undeniable blow to climate hawks across the country. It may force them to reshuffle their tactics and, to a lesser extent, their priorities.

But as shocked, saddened and disgusted as climate activists are about Schneiderman, they are convinced that reinforcements are readily available and that the movement to defend environmental laws from legal and legislative attacks remains strong, even in the absence of a fallen leader.

"It should not have a significant impact," said Maryland Attorney General Brian Frosh (D), another top environmentalist. "He was a leader, he was very energetic, and the New York attorney general’s office was fully engaged and I expect that that will continue. … Other [Democratic] AGs are also working these issues. If there’s any slack at all, one of us will pick it up — or all of us will collectively."

Despite those fighting words, Schneiderman’s political foes are gleeful about — and feeling emboldened by — his demise.

In a statement yesterday, Arkansas Attorney General Leslie Rutledge, who is chairwoman of the Republican Attorneys General Association, called Schneiderman "a disturbed monster" and a "sick man," and suggested he ought to be prosecuted, or at least "held accountable," for his alleged acts of violence against former girlfriends.

"A lot of climate skeptics are smiling at his downfall because he was an out-of-control, really wacky guy who held a lot of power," said Marc Morano, who runs the blog Climate Depot.

Morano and his allies have been especially disdainful of the legal attempts Schneiderman led to hold Exxon Mobil Corp. and other oil companies accountable for global warming, calling him "the ultimate shakedown artist."

"Let’s take a moment to pause and take a look at the strategy of blaming energy companies for bad weather," Morano said. He added that Schneiderman’s resignation and quick disappearance from the public scene will force climate activists to reconsider their approach.

"He was the lightning rod," he said. "He was the instigator. It definitely limits the movement when you take out the lead guy."

After his election as attorney general in 2010, Schneiderman became a climate change policy advocate, and that reputation magnified as he began fighting with the Trump White House on dozens of environmental issues and in the high-profile case against Exxon.

In 2007, when now-New York Gov. Andrew Cuomo (D) was attorney general, he used a little-noticed law known as the Martin Act to subpoena five energy companies — a coal company and four utilities — over climate change. Accusing the companies of misleading investors by failing to provide details about how climate regulations could affect them, Cuomo secured settlements in four cases (Climatewire, Sept. 6, 2016).

When he took office, Schneiderman applied that rubric to Peabody Energy Corp., the coal giant, and to Exxon.

Not only does New York have deeper pockets than other states to pursue such litigation, but the law itself is a muscular tool unavailable elsewhere. The Martin Act is particularly powerful because, unlike federal securities law, it does not require prosecutors to prove a defendant knew its acts were deceptive — just that they happened.

After he launched an investigation into Exxon in late 2015, Schneiderman set out to further burnish his climate credentials.

"Every fossil fuel company has a responsibility to be honest with its investors and the public about the financial and market risks posed by climate change," he said in a speech in the spring of 2016, speaking alongside other Democratic attorneys general and former Vice President Al Gore.

"I am confident that the investigation will continue regardless of who is its public face, and I greatly appreciate everything Maura Healey has done," said RL Miller, founder of the group Climate Hawks Vote.

Similarly, while Schneiderman often took the lead in environmental litigation against the Trump administration, other Democratic attorneys general including Healey, Frosh, Xavier Becerra of California, Lisa Madigan of Illinois and Hector Balderas of New Mexico have been regular plaintiffs in lawsuits against Trump’s agenda.

Is one of those Democrats poised to increase his or her visibility on climate and the environment now that Schneiderman is out?

"I don’t think Becerra’s office is popping the champagne" because Schneiderman has resigned, said Andrew Acosta, a Democratic consultant based in Sacramento, Calif.

Yet inevitably, given California’s deep-blue political tint and long-standing commitment to combating climate change, Becerra will find himself at the forefront of many legal and policy battles, Acosta said — especially with the national agenda dominated by Trump and the GOP Congress.

"The real opportunity for California and Becerra was Donald Trump," he said. "The president is a good foil in California."

"As strong and aggressive as Eric Schneiderman has been, that office is so deep, the bench there is so deep, I have really no doubt that they’re not going to lose a step," Parenteau said by phone, adding that the office has a rich history in environmental law.

"The capacity is huge," he said. "I think it really does have to do with the number of people in that office, the amount of environmental expertise."

During Schneiderman’s term, and before and during the tenures of Cuomo and Eliot Spitzer, a Democrat who preceded Cuomo as attorney general, the office clashed with Washington over environmental safeguards.

"They challenged Reagan, they challenged George W. Bush," Parenteau said. "There’s 40 years of experience with this particular AG’s office being extremely aggressive on the Martin Act and on environmental issues."

Beyond a handful of states, including California and New York, which has "distinguished itself in being able to dive into the most technical, challenging kind of environmental rulemaking," the list of attorneys general who take on complicated environmental cases thins out quickly, according to Parenteau. "They just don’t have the horses, the horsepower."

Frosh said that the New York attorney general’s office will continue to be every bit as active on climate issues even with Schneiderman gone. He called New York’s acting attorney general, Barbara Underwood, who had been serving as the state’s solicitor general, "a brilliant lawyer" and predicted that whomever the state Legislature selects to replace Schneiderman will be equally committed to fighting global warming (see related story).

"Climate deniers can rejoice that one of their opponents has fallen," Frosh said, "but it doesn’t affect the war."