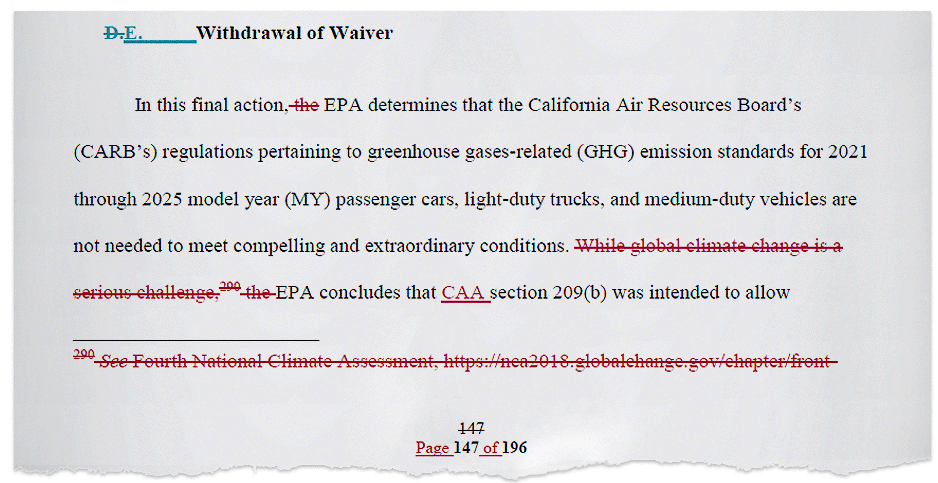 An earlier draft of the proposal from EPA and the National Highway Traffic Safety Administration contained the phrase "while global climate change is a serious challenge."

That language was nixed while the proposal was under review at the White House Office of Information and Regulatory Affairs.

Also axed was a footnote linking to the Fourth National Climate Assessment, which found that American life and prosperity will be increasingly at risk from global warming (Climatewire, Nov. 26, 2018).

The proposal is aimed at preventing California from setting tougher vehicle emissions standards than the federal government. The two agencies are each handling a different component of the rulemaking.

NHTSA is proposing to preempt California from issuing the tougher rules under the 1975 Energy Policy and Conservation Act.

Amit Narang, regulatory policy advocate at the left-leaning watchdog group Public Citizen, blasted the changes in an interview this morning.

"This definitely is just the latest example of a disturbing pattern of OIRA blocking EPA from making references to the seriousness of climate change," Narang said.

"I think the White House is concerned about allowing EPA to put in language that global climate change is a serious challenge because it undermines the case for revoking the waiver," he added.

"I mean, California is claiming that the threat of climate change is one of the big reasons they have to continue to increase fuel efficiency standards at the state level if the federal government is unwilling to do so."

Under President Trump, who rejects the scientific consensus on climate change, the White House regulatory affairs shop has scrubbed climate language from a number of other proposals.

In one instance, language about how climate change affects children’s health was deleted from an EPA proposal on heat-trapping chemicals known as hydrofluorocarbons (E&E News PM, Oct. 2, 2018).

In another case, language about how global warming fuels more extreme weather events was removed from draft EPA guidance on planning for natural disasters, although other references to climate change were left intact (E&E News PM, April 25).

Chase Jennings, press secretary at the White House Office of Management and Budget, didn’t immediately respond to a request for comment this morning.