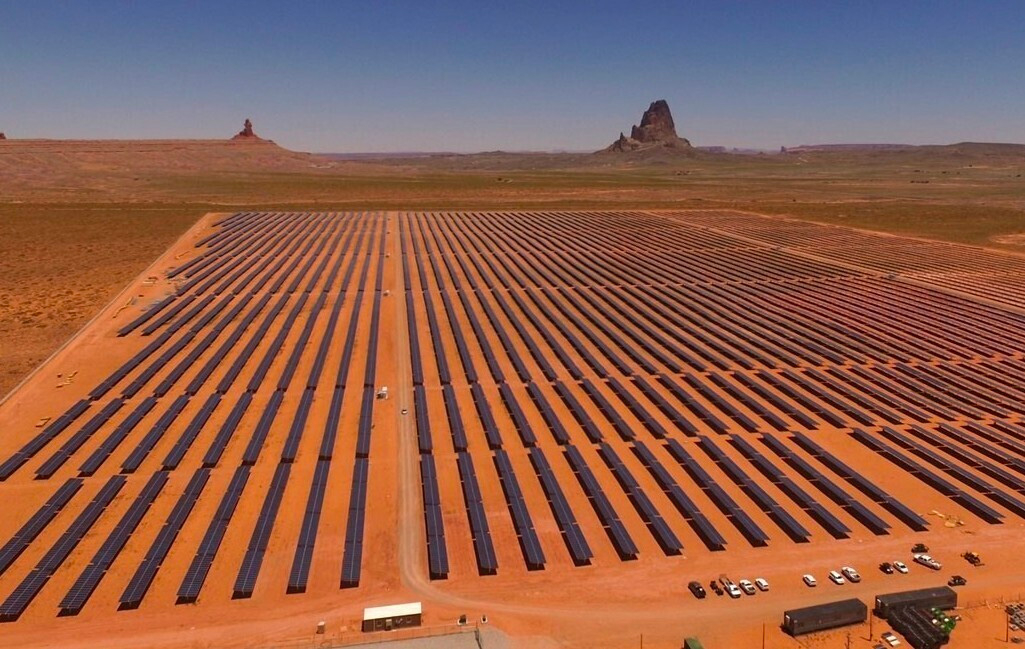 The climate law enacted this year lifted a long-standing financial barrier for Native American tribes seeking to build and own their own clean energy projects.

But the boost for energy development in Indian Country has an infrastructure problem: It could be many years before tribes can connect solar and wind projects to the power grid.

The Inflation Reduction Act allows tribes and other tax-exempt entities like electric cooperatives for the first time to receive direct payment tax credits for wind, solar and other clean energy technologies. That means they can essentially reap the same federal tax credits for large energy projects afforded to for-profit utilities and private developers for over a decade.

“Since the IRA was passed, we have finally tipped the scale in favor of tribes when it comes to energy,” said Chéri Smith, founder and CEO of Indigenous Energy Initiative, a nonprofit that works with tribes on renewable energy projects.

Tribes could play a significant role in helping slash greenhouse gas emissions nationally. Tribal lands cover about 5.8 percent of the country, but comprise 6.5 percent of the nation’s potential for large-scale clean energy, according to estimates from the National Renewable Energy Laboratory. All told, tribal lands in the contiguous United States have the potential to supply over 9 gigawatts of solar, wind, geothermal and other renewable energy resources, according to NREL, just less than one-third of the wind, solar and battery storage projects that came online nationwide in 2021.

Yet as more tribes explore investments in renewable energy, developers say that their projects are increasingly being held up by limited access to power lines and long wait times to link their projects to the grid. If left unaddressed, the delays could blunt the impacts of the Inflation Reduction Act for tribes at a time when the Biden administration has promised to include them and other disadvantaged groups in the clean energy transition, developers said.

“The financial picture for us to get to that next asset is right in front of us now — it’s no longer the limiting factor,” said Brian Lipscomb, CEO of Energy Keepers Inc., an independent energy developer owned by the Confederated Salish and Kootenai Tribes in Montana. “So what becomes the limiting factor is transmission and interconnection, and the interconnection queue.”

Historically, most energy projects located on tribal lands have been developed by nontribal entities that obtained rights of way from the Department of the Interior, said Suedeen Kelly, a partner at the law firm Jenner & Block LLP and a former Federal Energy Regulatory Commission commissioner. Most Native American reservations are held in trust by the federal government, and electric service may be provided by tribal-owned utilities, nontribal electric cooperatives or investor-owned utilities that operate nearby.

Until the 21st century, developers also did not need the approval of tribes to build energy facilities on their land as long as they had won a right of way from Interior.

“Oftentimes, the payment to the tribe associated with right of way has been minuscule,” Kelly said. “In many cases, particularly where the rights of way were granted for 50 years with minimal payment, the tribes become resentful of being taken advantage of.”

That history is part of why some tribes are now interested in developing and owning energy projects themselves, which requires not only proposing viable projects and financing them, but also eventually connecting them to the power grid.

Complaints about the so-called interconnection process for new energy projects are widespread among renewable energy developers. Earlier this year, FERC proposed a new rule intended to smooth out the process amid an unprecedented surge in solar, wind and battery projects nationwide.

But some tribes say they’re at a particular disadvantage. Native American reservations may be located in remote areas that have limited existing transmission infrastructure, said Jon Canis, general counsel at the Oceti Sakowin Power Authority (OSPA), a renewable energy developer jointly owned by seven Sioux tribes in the Dakotas.

Compared to for-profit utilities and established developers, corporations owned by tribes also tend to have less capital to cover the costs of grid upgrades needed to accommodate their projects, he said.

“You’re dealing with a class of customer that’s uniquely situated. They’re sovereign Indian nations,” Canis said. “They’re confined to reservations they didn’t choose and have historic underinvestment. So we don’t have the kind of facilities we need to support our development of utility-scale wind and solar farms.”

‘Nobody can do that’

OSPA was set up in 2015 for the purpose of responsibly harnessing the rich wind resources available in the region — something the Sioux tribes see as complementary to their values of living in harmony with the nature.

The power authority is currently developing two large wind farms on the Cheyenne River and Oglala Pine Ridge reservations, both located in South Dakota. To connect to the national power grid, the facilities will need to link with the Southwest Power Pool, a regional organization that oversees transmission in much of the central United States.

The wind projects could have generated more power if the rural area had greater access to transmission lines, according to Canis. He attributes the inadequate transmission infrastructure to past discriminatory practices by the federal government, whereby land was taken from the Sioux tribes to build hydroelectric dams, but few power lines were built to serve those living on the reservations.

Currently, before a new energy project can come online in the United States, developers need to enter their project into a “queue” managed by an electric utility or a regional grid operator. The utility or grid operator will then assess whether transmission or other grid infrastructure near the project must be upgraded to support the new generation. Those upgrades are then typically paid for by the developer of the new project.

In the Southwest Power Pool, the financial security requirements serve as a “readiness milestone” for projects to ensure they are financially viable, said Derek Wingfield, a spokesperson for the grid operator. Part of the goal is to discourage speculative projects that may not be ready to proceed from taking up space in the interconnection study process, he added.

“They are tied to milestone payments associated with interconnection upgrade costs that give project developers an appropriate price signal, while helping customers make well-informed decisions about the commercial solvency of their projects,” Wingfield said in an email.

Even so, they’re a limiting factor of OSPA. For the two wind farms under development, interconnection and security costs were estimated to be $48 million, more than the nonprofit entity could afford, so both projects have had to drop out of the queue, Canis said.

“It’s absolutely an insuperable barrier for not just Indian tribes, but smaller developers,” he said. “Nobody can do that.”

For other tribal energy developers, the challenge with the interconnection process is not the cost of studies, but the length of time it now takes for projects to be studied and approved for interconnection. That’s the case for Energy Keepers.

Established in 2012, the organization became the first tribal-owned entity to acquire a hydroelectric dam, the 208-megawatt Kerr Dam on the Flathead Indian Reservation, three years later.

“There are transmission resources to accommodate this. It’s just the interconnection queue is the issue,” he said.

Seed money and a ‘big piece of unknown’

FERC’s proposed changes to the interconnection process could help address some of the challenges facing tribes, if they are finalized next year. Although tribes are sovereign nations, FERC still oversees the national power grid across most of the entire contiguous United States.

In many parts of the country under FERC’s jurisdiction, new generation projects are assessed for interconnection individually in the order in which they enter the queue. In its proposed new rule, however, FERC called on grid operators to begin prioritizing projects that are “ready” to be built, based on whether they’ve reached certain financial milestones, secured permits and other factors. The change could benefit tribal entities that have already secured land rights and permits for projects.

In addition, interconnecting projects should be assessed in groups, which could reduce the time it takes to get to the approval stage, according to FERC. Generators must abide by certain deadlines and requirements to remain in the queue, the commission proposed (Energywire, June 17).

If FERC finalizes its proposal, Energy Keepers “would be coming up to an equitable opportunity with the rest of the industry,” Lipscomb said.

The FERC changes could also make a difference for the Navajo Nation as it shifts from hosting coal-fired power plants to owning its own solar farms. One of the largest tribes in the country located in the Four Corners region, the Navajo is the sole owner of the Navajo Tribal Utility Authority, which is currently developing a 200-MW solar project.

The solar project would connect to the power grid through a substation associated with the former Navajo Generating Station. A long-standing source of revenue for the Navajo and Hopi tribes, the coal-fired generating station, located near Page, Ariz., was decommissioned in 2020.

The Navajo Tribal Utility Authority already has the right to use the transmission lines in the area, said Walter Haase, general manager of the utility. The project site has also been secured through a lease from the tribe, and all environmental studies have been completed.

Yet it’s unclear when the solar farm will be approved to connect to the grid. That’s because other proposed energy projects from private developers — including ones that are much less far long in the development process — joined the interconnection queue in the region years before, and therefore must be considered first under existing regulations, Haase said.

“You’ve got this big piece of unknown and delay that hurts everybody. It hurts my off-taker, it hurts the customers, it hurts the tribe, and it delays our transition,” Haase said. “I’m glad to see that FERC is trying to address it.”

The commission’s efforts to overhaul the interconnection process have been supported broadly by a wide range of groups, including many utilities and state regulators, although various parties disagree about whether some of the solutions proposed would work in practice or fully address the backlog of projects.

Notably, the energy challenges and opportunities facing tribes investing in clean energy vary depending on the tribe’s size, location, history and other factors, said Kelly of Jenner & Block.

For example, some tribes need support with earlier steps in the energy development process. In particular, tribes that have not previously owned generation or transmission lines may need funding or technical assistance to complete feasibility studies, which are conducted to determine whether potential projects are viable, she said.

“Many tribes do not have revenues to be able to decide to spend a couple hundred thousand dollars on a possibility that they can do a feasibility study,” Kelly said. “They need to have the seed money to understand what development makes sense economically.”

Still, observers said that the opportunity for tribes to become major clean energy developers is stronger than before with the changes proposed in the climate law and FERC’s interconnection plan. In addition to the direct payment tax credits for energy projects, the law also expanded the amount of loans available for energy projects through the Department of Energy’s Tribal Energy Loan Guarantee Program from $2 billion to $20 billion.

“Tribal nations are set up perfectly for this. They are out in rural areas, the ability to set up utility-scale [solar] is tremendous,” said Robert Blake, a citizen of the Red Lake Nation and owner of Solar Bear, a Minneapolis-based solar installation company. “With 574 tribal nations set up across the country, this is the perfect opportunity for tribal nations to create their own tribal utilities.”