Climate lawyering can be deadly in the global south 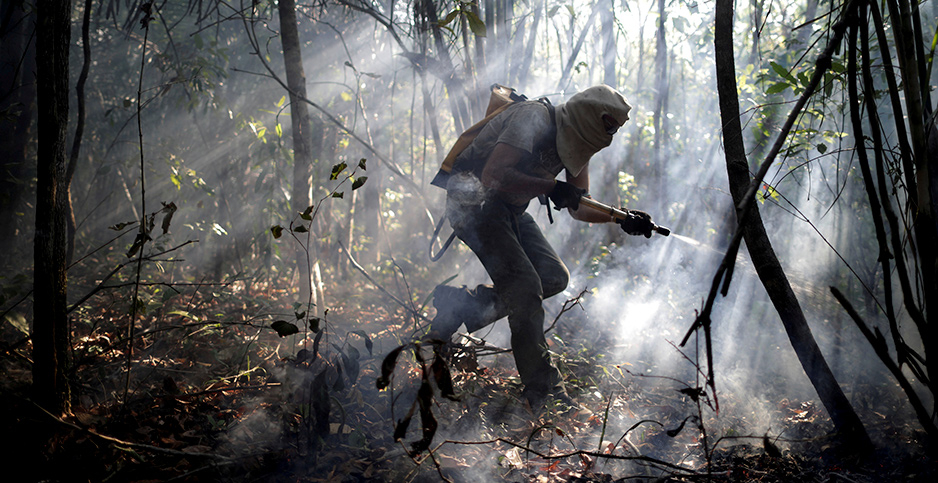 A volunteer firefighter works to put out a blaze in Chapada dos Veadeiros National Park in Brazil. Climate and environmental advocates in Latin American countries often face threats, intimidation and violence outside the courtroom, and some say the courts themselves can be harmful to communities locked in battles to defend their land from fossil fuel extraction. Ueslei Marcelino/Reuters/Newscom

Before he was found nearly dead from a head wound in Indonesia last year, an environmental lawyer confronted regional officials and police in court over a hydroelectric dam.

Golfrid Siregar eventually succumbed to his injuries, which authorities first said were the result of a traffic accident. But Siregar’s colleagues at Wahana Lingkungan Hidup Indonesia, the nation’s largest environmental group, have told media outlets like The New York Times that he had faced threats for his work in the courtroom.

International human rights groups and Siregar’s family are calling on the Indonesian government to investigate his death — one of many killings around the world that have been linked to environmental advocacy.

"It’s a difficult decision as a litigant to be involved in [environmental cases], because if you’re fighting the government, if you’re fighting companies in these countries, you are likely to receive at least a few threats," said Joana Setzer, a lawyer from Brazil who leads the Grantham Research Institute’s study of climate litigation.

Climate activism and legal action targeting regional authorities is risky, especially in countries across Latin America, Africa and Southeast Asia where advocates have nonetheless continued to push the boundaries of climate lawyering in recent years (Climatewire, May 13).

Environmental defenders in the global south face death threats and intimidation — both inside and outside the courtroom — when they go up against corporations and governments with fortunes invested in development and infrastructure projects.

And sometimes, the legal challenges themselves pose a risk to environmental advocates who have been doing work on the ground for years before climate lawsuits were a commonly used tool.

Setzer said that some of her colleagues think hard about the risks to themselves and their families before taking on some governments in court — a factor that European and U.S. litigators often don’t need to consider.

Though climate lawsuits are relatively new, violence and intimidation against environmentalists is not.

Berta Cáceres, a Lenca indigenous leader and environmental activist from Honduras, was murdered in her home in 2016 after years of threats stemming from her work fighting for indigenous land rights.

And just this year, two prominent butterfly conservationists — Homero Gómez González and Raúl Hernández Romero — were slain in the central Mexican state of Michoacán. Both worked at the El Campanario monarch butterfly sanctuary and fought logging efforts in the area.

The risks associated with environmental advocacy in the global south is connected to nations’ economic reliance on fossil fuel and resource extraction, said Juan Auz, an Ecuadorian lawyer and researcher at Germany’s Hertie School of Governance.

"In order to circumvent their civil rights responsibility to protect human rights or environmental or land defenders, [governments] tend to pass laws to curtail the rights to freedom of association, sometimes freedom of expression, the right to protest," he said.

Correa passed an executive order that allowed him to monitor and control the work of NGOs in the region, and he shut down Fundación Pachamama over its work against oil and gas expansion on indigenous land, Auz said.

Though Auz and his colleagues went to court over the shutdown, they were ultimately unsuccessful. This came as no surprise, he said, since courts are not independent of the executive in some Latin American countries.

"Rule of law and the independence of the judiciary are very important traits in order to predict if an NGO or social actor or a social movement will resort to court," he said.

Brazil, Colombia, Peru and the Philippines topped the list of the most dangerous nations for environmentalists in 2017, according to data compiled by Global Witness.

Despite the risks, advocates continue to file climate and environmental lawsuits in those countries.

But there’s also "valid pushback" from on-the-ground environmental defenders against certain northern strategies — including the use of litigation, said Camila Bustos, a student at Yale Law School.

"Funders are really excited about the possibility of litigation and its impacts … and it can be a really powerful tool," Bustos said, "but I think some folks on the ground feel that this is a northern agenda that’s been imposed by funders to sort of replicate a northern strategy."

Bustos and 24 other young Colombians in 2018 won a landmark lawsuit that called for the government to develop a climate and deforestation plan. Though their case, Future Generations v. Ministry of the Environment and Others, inspired other lawsuits and set new precedent, Bustos said the ruling was not put into action as planned.

"When we started to look into the way that the order of the judge was implemented, we realized that there were really problematic things happening," she said. "Police were launching these investigations and these kind of law enforcement efforts to capture small farmers and then come out in national media and say ‘Look, we’re implementing the famous Future Generations judgment.’"

As climate and environmental litigation continues to evolve, Bustos said, lawyers should be taking a hard look at regional social movements and long-standing environmental work across diverse regions.

"There’s something to be said about having to live with the direct consequences of these well-meaning litigation efforts when you are the … person that has traditionally lived in that land and is now in the oversight of police forces," she said.